FedEx – Looking at the Big Picture

FedEx (FDX) released its Q4 and FY2018 results on June 19, 2018. The heightened risk of protectionism is counterproductive to economic growth and could negatively impact FDX's business in the short-term. In addition, Amazon's entry into the package delivery service industry is a risk FDX must contend with. FDX, however, is a well run company and is investing heavily for the future. In this analysis I look at why I view FDX as an attractive investment.

Full access to this article is being provided to all.

Subsequent to initiating a position in FedEx (NYSE: FDX) in one of our retirement accounts on March 22, 2017, I published my first FDX article entitled A Lesson in Long-Term versus Short-Term Thinking. In this article I indicated I was of the opinion FDX would likely rise to ~$220 before the end of FY2018; FDX blew past this level in late November 2017. In my opinion, stock prices of many companies had become detached from the underlying fundamentals in the last few months of 2017 and FDX was one such company; its stock price ultimately rose to ~$275.

Investor sentiment changed subsequent to mid-late January 2018 and in my March 23, 2018 Focus on the Long Term Growth Potential article I concluded with the comment that ‘I anticipate further pullback in FDX’s stock price over the short-term and will periodically add to my position on further weakness.’

In that article I included my thoughts on the:

After that article, FDX’s stock price remained in the ~$230 - ~$240 zone in late March/early April timeframe. With the weakness in FDX’s stock price I added to my FDX position. Regrettably, FDX ran away on me and rose to ~$265 before I could complete all my purchases.

Now that FDX has released its Q4 and FY2018 results and its FY2019 outlook I thought I would perform a quick review to determine whether I should add to my position or bide my time before acquiring additional shares.

FDX has undertaken several derisking activities which include planned pension plan design changes and special lump sum settlements. The reasoning for these activities is to reduce the volatility of FDX’s pension liabilities and to further strengthen the balance sheet.

In May 2018, FDX and Metropolitan Life Insurance Company (Met Life) entered into an agreement in which Met Life will provide annuity benefits to approximately 41,000 retirees and beneficiaries in FDX’s defined benefit pension plans. The removal of ~$6B in pension obligations translates into a ~20% reduction in FDX’s pension liabilities from its balance sheet.

Under the terms of the agreement, FedEx purchased a group annuity contract from Met Life and Met Life now has the responsibility for making benefit payments to the retirees or their beneficiaries covered by the agreement. 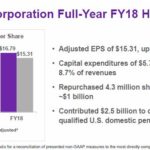 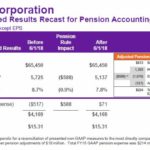 Guidance can be found in the June 19, 2018 Earnings Release. 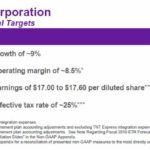 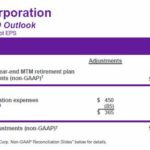 In my March 23, 2018 article I noted that on the quarterly conference call with analysts, FDX’s Chairman and CEO commented that history has repeatedly demonstrated that protectionism is counterproductive to economic growth. The better approach is to encourage open markets and free exchange of products and services and to reduce barriers to trade.

On the June 19, 2018 conference call FDX’s Chairman and CEO stated that ‘we do remain concerned however about threats that manage the free flow of goods among countries, trade as a two-way street, and FedEx supports lowering trade barriers for our customers.’

While the free flow of goods will likely improve over the long-term, all is not well in the Oval Office. The deterioration in the free flow of goods among countries will likely persist over the short-term. On a long-term basis, however, I strongly suspect normalcy will be restored. Given this, FDX continues to manage its business for the long-term and is projecting CAPEX of ~$5.6B (~8% of revenue) in order to remain highly competitive. This figure is in line with CAPEX in recent years.

I have experienced several economic downturns and market corrections. Based on my experiences, I am of the opinion too many investors are currently far too complacent and have taken on a level of risk they do not fully appreciate.

I have absolutely no clue when the next economic downturn/market correction will occur. Secondly, I retired early and have no desire to return to the workforce. I, therefore, do my utmost to mitigate my risks. It is for this reason that I pay heed to Moody’s and S&P Global ratings even though both entities are not infallible.

In the case of FDX, Moody’s rates it Baa2 and S&P Global rates it BBB. Both ratings are at the mid-point of the lower medium grade category and are stable. These ratings are acceptable from my perspective.

While the ‘For Sale’ sign is certainly not flashing at these levels, I view FDX as currently fairly valued based on earnings projections.

Details on FDX’s historical stock splits, stock dividends, and recent stock repurchase programs can be found here and its dividend history can be found here. The company’s website reflects the recent $0.15 increase in the quarterly dividend ($0.50 increased to $0.65) scheduled to be paid July 9th to shareholders of record as at June 25th.

This dividend increase is included in the following compound annual growth rate of FDX’s dividend over the past several years. 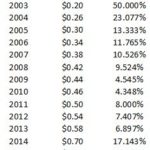 I can fully appreciate that some investors will automatically eliminate FDX as a potential investment because the sub 1% dividend yield is deemed too low for the purpose of meeting personal investment goals and objectives. I, however, look at the bigger picture and endeavor to determine what would be a realistic overall long-term investment return taking into consideration dividend increases and potential capital gains.

Have a look at the following graphs to see how FDX has performed with/without dividend reinvestment over various timeframes. 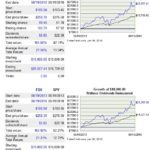 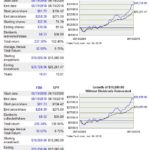 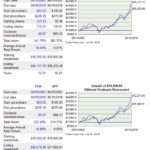 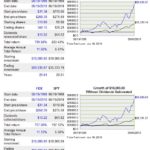 As evidenced from the graphs reflected above, FDX is an example of a low dividend yielding company whose overall investment returns have outperformed the broad index over various timeframes.

I have mentioned this in previous articles but once again take the opportunity to caution investors not to chase yield. In my opinion, chasing stocks with lofty dividend yields and with extremely high dividend payout ratios leaves investors vulnerable to dividends cuts/freezes if business/economic conditions deteriorate.

A substantial number of companies have taken advantage of the low interest rate environment in recent years to load up on debt to repurchase company shares; FDX is one such company.

In FY2006, FDX had 310 million weighted average common and common equivalent shares outstanding. As at FYE2006, FDX had ~$1.6B in long-term debt.

Some of this debt has certainly been used to finance the growth of FDX’s business while a component has been applied toward share repurchases.

I have no objection to this strategy if done with prudence (ie. company has strong free cash flow, debt is at a very low interest rate, shares are undervalued, there is no other investment alternative which would provide superior returns for shareholders, debt maturities are several years into the future and are staggered).

In the case of FDX, the annualized weighted-average interest rate on long-term debt is 3.6%. Looking at the schedule of long-term debt I note it is well staggered in maturity.

I strongly suspect that the level to which FDX has reduced the number of issued and outstanding shares in recent years will likely slow in coming years. My reasoning for this is:

While a slowing of the degree to which shares are repurchased is likely, I am confident a sufficient number of shares will continue to be repurchased to offset the number of shares issued as part of executive and employee compensation packages (Note 10: Stock Based Compensation on page 66 of 96 in FDX’s FY2017 Annual Report). The weighted-average exercise price of many stock options is well below FDX’s current stock price!!

As noted in my March 23, 2017 article, FDX certainly has its hands full with the integration of TNT which it acquired in May 2016 (the cyber attack did help with the integration process). It also faces a formidable competitor in the form of Amazon which has publicly stated it intends to complete its own fulfillment and to provide a package delivery service designed to compete directly with FDX. FDX also has a high level of international exposure which makes it vulnerable to downturns in global trade and political interference.

Despite these headwinds, it is extremely difficult to replicate FDX’s network of planes, trucks, sorting sites, rights to fly, and skilled employees. While a new entrant, such as Amazon, may be prepared to incur the significant expense which will be incurred before it can win away a critical volume from entrenched industry participants, there are few other companies in Amazon’s position.

I do not doubt Amazon’s entry into FDX’s line of business will negatively impact FDX. I strongly suspect that overall industry volumes will continue to grow, however, and FDX will be able to capture a sufficient percentage of this growth to offset any business lost to Amazon.

In my March 23, 2018 article I indicated that the actions being taken by the Oval Office will likely have a negative impact on FDX in the short-term. In my opinion, FDX will be able to adapt as it has done during other periods in which it experienced challenging business conditions. I, therefore, view FDX as an attractive long-term investment.

I view FDX as fairly priced at the current ~$258.50 level and intend to acquire additional FDX shares. I also intend to periodically add to my position on further weakness.

By Charles Fournier|June 20th, 2018|General Investing|Comments Off on FedEx – Looking at the Big Picture