Over the span of almost 150 years, Brown-Forman Corporation (NYSE: BF-a and BF-b) has built a portfolio of more than 40 spirit, ready-to-drink cocktail, and wine brands that includes some of the best-known and most-loved trademarks in the industry; BF will be celebrating its 150th year in business in 2020.

BF’s most important brand in its portfolio is Jack Daniel’s Tennessee Whiskey. According to Impact Databank’s ‘Top 100 Premium Spirits Brands Worldwide’ list it is the 4th largest spirits brand of any kind and the largest American whiskey brand in the world. Jack Daniel’s Tennessee Whiskey was the only premium spirits brand among the top 5 to grow volume in each of the past five years.

In its 5th year on Impact Databank’s list, Jack Daniel’s Tennessee Honey was recognized as a top 15 growth brand and remains the second-largest-selling flavored whiskey.

Other leading BF global brands on the Worldwide Impact list are:

First and foremost, when I invest in a company with such a structure I am fully aware one exists. If one objects to this structure then the solution is simple…do not invest in the company. Secondly, this structure was likely created by the founding family/families because they felt they and their descendants would have more of a long-term orientation than some random investor who subsequently acquired a large block of stock.

I recognize some readers may be inclined to purchase the BF-a voting shares because they wish to have a say in how the company is managed. Regardless of how many voting shares are purchased, your votes will be meaningless because the Brown Family collectively own in excess of 65% the company.

Since the Class B non-voting shares are the most heavily traded and the variance in the market price between the two classes of shares is negligible (~$0.16), this article is written from the viewpoint of owning / acquiring the Class B shares.

BF, the largest American-owned spirits and wine company with global reach, was founded as a partnership in 1870 but was incorporated in 1901. It primarily manufactures, bottles, imports, exports, markets, and sells a wide variety of alcoholic beverages under recognized brands.

It sells its products in over 170 countries with the US accounting for 47% of net sales in FY2018. BF’s largest international markets include the United Kingdom, Australia, Mexico, Germany, France, Poland, Russia, Brazil, and Canada.

In FY2018, BF generated 53% of net sales outside the United States versus 56% in FY2014. The US proportion of net sales grew from FY2014 to FY2016 and stayed constant in FY2017 primarily due to the negative effect of foreign exchange on its international business.

Trade information indicates BF is one of the largest global suppliers of premium spirits. According to International Wine & Spirit Research (IWSR), the 10 largest global spirits companies controlled less than 20% of the total global market for spirits (on a volume basis) in 2017.

In addition, and particularly in the US, BF is increasingly competing with national companies and craft spirit brands with many being recent entrants to the industry.

The following innovation and acquisition and divestiture developments in BF’s business occurred in FY2016, FY2017, and FY2018.

Readers are likely well aware of the recently imposed tariffs and the impending tariffs introduced by the US federal government. BF was aware of impending trouble from tariffs being slapped on U.S. bourbon, and therefore, has been working in recent months to mitigate the potential impact by shipping more liquor overseas.

BF was thrust into the spotlight in recent weeks when Mexico placed a 25% tariff on bourbon imports in response to Trump’s imposition of import duties on metals. In addition, the European Union has indicated it will also respond with levies. Given these circumstances, BF has indicated it is difficult to provide a precise full-year outlook. It has, however, gained more flexibility in managing trade risks by moving shipments to markets where it has its own distribution, rather than depending on third-party distributors. 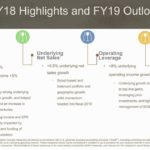 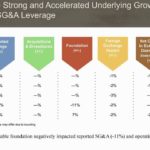 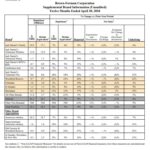 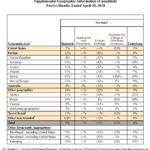 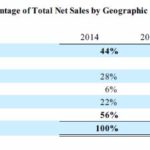 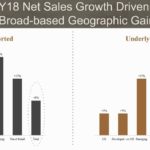 Included in the results is the establishment of a charitable foundation with $70 million. The purpose of this charitable foundation is to supplement and stabilize the amounts the company provides annually to non-profit groups. The goal is to provide a stable source of funding for charitable giving that is not tied to the company's performance. The intent is to generate $3 - $5 million a year, depending on how the investments fare.

FY2019 guidance is as follows. 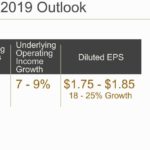 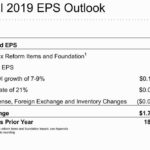 Had you owned BF shares prior to November 2003 you would have benefited from 5 stock splits; 500 shares would now be ~4688 shares. You would have well in excess of this number of shares if you had been automatically reinvesting your quarterly and ‘special’ dividends.

While BF’s dividend yield is typically less than 1.50%, the dividend yield reported on various websites exclude the ‘special’ dividends since the distribution of same is inconsistent.

This is a prime example of why exclusive reliance on stock screeners can result in missed investment opportunities. 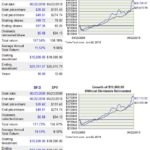 Diageo plc (NYSE: DEO) is currently my sole exposure to the Wineries and Distillers industry. I would like to expand my exposure to this industry by initiating a position in BF but view BF’s valuation as lofty.

I am not concerned about the long-term impact on BF from the implementation of ill-advised tariffs and have the utmost confidence BF’s management will navigate the business prudently during this challenging environment.

I think the tariffs will be of a short term nature. In my opinion, the new US President at the end of Trump’s term (I do not envision him being re-elected) will most likely takes steps to reverse the harmful measures which have been introduced / which will likely be introduced.

At this juncture I am prepared to patiently wait for a better entry point. Based on the information at hand I would be prepared to initiate a position if BF were to retrace to $45 or less.

Disclosure: I do not currently own shares in BF-a or BF-b nor do I intend to purchase shares within the next 72 hours.

By Charles Fournier|June 23rd, 2018|Equity Investing|Comments Off on Brown-Forman – Patiently Waiting for a Better Entry Point