I am in the process of deploying cash to acquire additional shares for my FFJ Portfolio. While I may want to use the dividends generated from this portfolio to service some of my living expenses during retirement, my ultimate goal is to have a well diversified portfolio which can be willed to the next generation.

I am investing in companies where I can put my head on the pillow at night knowing there is a possibility they may get bruised but will likely survive if/when we do experience market turmoil. In this regard, I am not seeking speculative investments. Instead, I am restricting my investments to high-quality companies with a track record of dividend growth and I am spreading my investments over the five main economic sectors (Resources, Manufacturing, Finance, Utilities, and Consumer).

The subject company of this post appears to fit the bill and this is a company which has been almost under my nose for years!

Today I saw Enbridge Inc. (NYSE: ENB) and Union Gas vehicles in our neighborhood; ENB owns Union Gas as a result of its acquisition of Spectra Energy Corp. on February 27, 2017. I regularly see these companies’ vehicles but I have never given it any thought to check out ENB as a potential investment until fellow blogger The Financial Canadian asked me for my take on the company. I decided to act on his request and coincidentally noticed ENB had released its Q2 results ending June 30, 2017 on August 3, 2017!

ENB has been in business for over 65 years. It lines of business are energy transportation, generation, and distribution. It is a Canada’s largest natural gas distribution provider with about 3.5 million retail customers in Ontario, Quebec, New Brunswick and New York State.  It has interests in nearly 3,000 megawatts of net renewable generation and power transmission capacity, based on projects in operation or under construction, and continues to expand into renewable energy sources of power.

ENB’s 17,511 miles (28,181 km) of active pipe makes it the operator of the world’s longest, most sophisticated crude oil and liquids transportation system. It delivers an average of 2.8 million barrels of crude oil each day through its Mainline and Express pipelines, and transports 28% of the crude oil produced in North America. It is also a North American leader in the gathering, transportation, processing and storage of natural gas, with 34,410 miles (55,377 km) of gas pipelines. Approximately 23% of all natural gas consumed in the U.S., serving key supply basins and demand markets, is moved by ENB. In addition it has 11.4 billion cubic feet per day (Bcf/d) of processing capacity, 307 thousand barrels per day (Mbpd) of NGL production, and 437 billion cubic feet (Bcf) of net natural gas storage capacity.

ENB is actively expanding its interests in renewable and green energy technologies. This includes wind, solar energy, and geothermal, with nearly 3,000 megawatts (MW) of net renewable generation and power transmission capacity, based on projects in operation or under construction.

ENB also manages several investment options that trade on the NYSE and/or the TSX:

While I endeavor to provide a high level overview of ENB, I strongly suggest you look at the following to get a more comprehensive overview of ENB’s operations.

There is just no possible way this post can cover all the material presented in the company prepared material.

Here are some statistics for those interested in more than just the financials:

Q2 profitability was negatively impacted by outages and production disruptions in ENB’s liquids pipeline business. ENB, however, expects improved business as production and throughput ramps back up on its mainline system.

Very recently ENB confirmed it had obtained permits in Canada, North Dakota, and Wisconsin for its Line 3 pipeline replacement project which will run from Hardisty, Alberta, to Superior, Wisconsin. It, however, still requires regulatory approval from Minnesota but is cautiously optimistic it will receive this in Q3, and therefore, has very recently commenced construction.

The downside is that regulatory delays and route modifications are expected to increase the cost to C$8.2 billion ($6.52 billion) which is 9% more than previously projected.

On a positive note:

ENB, is of the opinion it will be extremely competitive in terms of attracting spot barrels as refiners in the U.S. Midwest and Gulf Coast area like the product ENB transports. It is not, however, the only company in the business of moving liquids through pipelines. It competes against TransCanada and Kinder Morgan; TransCanada's (NYSE: TRP) Keystone XL and Kinder Morgan’s (NYSE: KMI) Trans Mountain pipeline projects have also experienced considerable delays but are cautiously expected to proceed after years of political wrangling.

The combined ENB/Spectra entity adds significant scale, improves the balance sheet, and is accretive to dividend growth. I really like that Spectra’s gas pipelines diversify ENB's risk profile and I foresee growth in demand for natural gas over the coming years as being as huge plus for ENB.

The completed merger between ENB and Spectra Energy now means that:

ENB's “Mainline” is well positioned to benefit from Western Canadian crude volume growth. It has been operating at close to full capacity and the replacement of “Line 3” in 2019 will add an incremental 375,000 barrels/day of new capacity.

I think it would be a real shame for ENB to just focus on the pipeline business so I am pleased to see that ENB is growing its renewable energy business.

You can get a high level overview of ENB’s multiple projects here and also in the following screenshots extracted from the Q2 2017 Financial Results and Strategic Update. 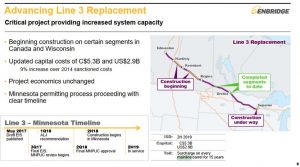 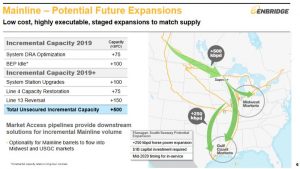 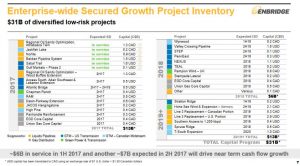 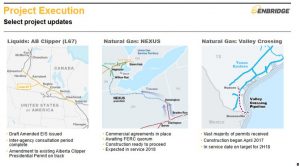 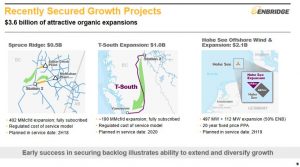 I also like that ENB has a relatively low-risk business model with limited direct commodity exposure since ~96% of its cash flow is linked to long-term commercial agreements (e.g. take or pay contracts). In addition, less than 5% of EBITDA is exposed to commodity prices.

ENB has a track record of paying dividends for over 64 years to shareholders and with annual dividend increases dating back to 1996.

Over the past 20 years, ENB’s dividend has grown at an average compound annual growth rate of 11.2% and ENB is projecting annual dividend growth of 10% - 12% during the 2018 – 2024 timeframe. This historical dividend growth has not come at the expense of ENB’s financial strength as Adjusted Cash Flow from Operations (‘ACFFO’) coverage of the dividend remained very strong in 2016 (approximately two times).

In 2017 alone, ENB has increased its dividend twice. In January 2017, ENB announced a 10% increase to its dividend per share, increasing the quarterly dividend to $0.583 from $0.53; this increase represented the 22nd consecutive year of increased dividends.

On May 4, 2017, ENB declared a quarterly common share dividend of $0.61/share payable on June 1, 2017 to shareholders of record on May 15, 2017. The declared dividend represented an increase of approximately 5%. That incremental dividend increase was consistent with ENB’s previously announced intention to consider an additional increase to its quarterly dividend upon completion of the Spectra Energy Corp acquisition which closed February 27, 2017.

ENB targets a 50% - 60% dividend payout of ACFFO, thus providing a healthy balance between returning income to shareholders and retaining income for reinvestment in new growth opportunities.

I view ENB’s dividend track record and its projected dividend growth as attractive features for my purposes.

As part of the Spectra Energy acquisition, ENB issued a considerable number of new shares.

ENB does not have a history of redeeming shares. In fact, during the 2009 – 2016 time frame, ENB had the following number of diluted weighted average shares outstanding (expressed in millions): 732, 748, 761, 785, 817, 840, 847, and 918. I generally prefer to acquire shares in companies that are reducing their share count but have made an exception in the case of my recent acquisition of ENB shares since there is a positive trend on an adjusted earnings per share basis. 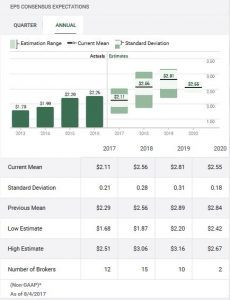 I like ENB’s relatively recent acquisition of Spectra Energy and the business model. I take comfort that ENB has the wherewithal to weather the storms that will inevitably arise over the course of time. Furthermore, I am confident ENB will generate a reasonable return for me over the foreseeable future with the probability being very low that I will experience a major permanent impairment to my invested capital.

Based on my analysis I very recently initiated a position of 400 shares in the TSX listed ENB shares for my FFJ Portfolio; I am a Canadian resident and want to minimize my foreign exchange risk and do not want to incur withholding tax on the ENB dividends hence the reason why I did not purchase the NYSE listed shares.

Disclosure: At the time of writing this post I am long ENB.

By Charles Fournier|August 7th, 2017|General Investing|Comments Off on Enbridge Inc. Stock Analysis – An Investment Opportunity Right Under My Nose