On July 27, 2017 Automatic Data Processing (NASDAQ: ADP) released its FY2017 results and provided guidance for fiscal 2018. This was followed up with Pershing Square Capital Management L.P. (“Pershing”) informing ADP on August 1, 2017 that it was seeking effective control of ADP through five Board seats at ADP's 2017 Annual Meeting as well as a CEO change. Shortly thereafter, Pershing modified its proposal.

In this post I touch upon ADP’s “Client Funds Portfolio Extended Investment Strategy”, provide my opinion on Pershing’s recent proposal, and what I view as a reasonable valuation.

Founded more than 60 years ago, ADP has grown to the stage where it now generates almost $12.4B in revenue from its more than 650,000 clients in more than 110 countries. You can find a Corporate Overview here.

While you can easily review ADP’s 13 page Fiscal 2017 presentation which accompanied the recent earnings call (it includes management’s projections for Fiscal 2018), I want to touch upon ADP’s Client Funds Portfolio Extended Investment Strategy which impacts the adjusted results.

The adjusted numbers reflected in the presentation include interest income earned on investments associated with ADP’s Client Funds Extended Investment Strategy and any interest expense on borrowings related to this strategy. 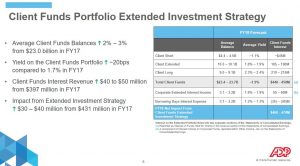 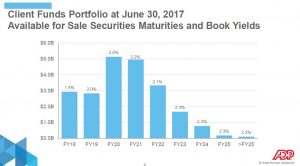 ADP believes these client funds are fundamental to the underlying operations of its business model. As at June 30, 2017 it had ~$27.3B of client funds on deposit while as at June 30, 2016 it had ~$33.8B. Naturally, deposits of this magnitude, a positive yield curve, and longer-dated investments will allow ADP to generate a substantial amount of investment income. When deemed prudent, ADP will further enhance its investment returns by investing long and borrowing short to take advantage of the yield spread.

I reference the following from ADP’s July 27, 2017 Earnings Release.

The interest assumptions in our forecasts are based on Fed Funds futures contracts and forward yield curves as of July 25, 2017. The Fed Funds futures contracts used in the client short and corporate cash interest income forecasts assume an increase in the Fed Funds rate in March 2018. The three-and-a-half and five-year U.S. government agency rates based on the forward yield curves as of July 25, 2017 were used to forecast new purchase rates for the client and corporate extended, and client long portfolios, respectively.

Having said this, ADP has always maintained that safety, liquidity, and diversification of its clients’ funds are the foremost objectives of its investment strategy.  Could you imagine what would happen if it came time to disburse its clients’ funds and there was a shortfall!? As a result, client funds are invested extremely prudently and conservatively in an investment portfolio that is predominantly AAA/AA quality.

There are concerns that new business bookings are slowing at ADP. This has resulted in ADP being the third-most shorted company in the data processing and outsourced services sector.

Given the pressure being placed on ADP by sophisticated investors, Pershing is of the opinion that it can step in and have a say at the Board level as to what changes it feels are necessary to drive up the stock price.

Its proposal calls for the following individuals to stand for election:

While these are undoubtedly very bright people, I don’t know what deep expertise they possess in the areas in which Pershing indicates ADP must make significant improvements.

Annual Report on Form 10-K to see who stood for re-election as Directors, I also see some very bright experienced individuals. 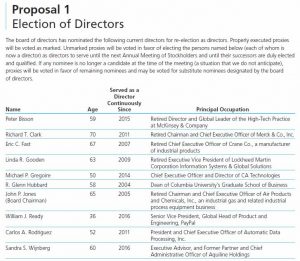 Pershing is of the opinion ADP can accelerate growth, improve the quality of its software and service offerings, slash operating costs, and improve efficiency. I have not seen the specifics on what Pershing wants ADP to do to achieve these objectives but I suspect Pershing desperately needs to improve the performance of Pershing Square Holdings, Ltd. and will do whatever it can in this regard. The variance between its returns and various benchmarks is significant and I am certain Pershing’s investors are looking for better results very quickly. I, however, would hate for Pershing to narrow the gap between its returns and the benchmarks at the expense of ADP employees, customers, and shareholders. I hope Pershing is unsuccessful in gaining any seats on ADP’s Board.

On that note, it certainly appears ADP’s CEO feels the same way and that he does not have a lot of love for Bill Ackman!

ADP has an enviable history of having increased its annual dividend for 42 consecutive years.

I chose to show the compound annual growth rate starting in 2009 separately because that is the last year when ADP’s dividend ended its 6 year stretch of double digit growth.

While growth has slowed subsequent to 2009, investors have still been rewarded with a reasonable dividend growth rate of ~7%.

In addition to the reasonable dividend growth and capital appreciation, the overall return on an ADP investment is even more impressive if you have owned ADP shares for many years. If you acquired ADP shares prior to 2006 and still own them, you have also benefited from the spin-off of the following publicly traded companies:

We have owned ADP shares prior to both spin-offs. If you are in a similar position, you will know exactly what I mean when I say our overall return on investment is far greater than what ADP’s stock chart suggests. 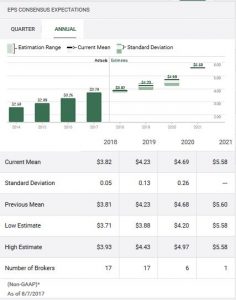 While ADP is a wonderful company, I view recent valuations as somewhat rich. This is coming from someone who has been thinking this way for several months and who already owns several hundred shares outside the FFJ Portfolio. I continue to reinvest all dividends but for the sake of investors looking to initiate a position in ADP, I would like for the stock price to retrace to more reasonable levels.

As noted in previous posts, I am of the opinion a market correction is long overdue and I am not alone in this camp. I have no way of knowing if/when a correction will occur but I suspect patience would be warranted for a better entry point.

ADP is a wonderful company that belongs in any long-term investor’s portfolio. My definition of long-term is perhaps slightly longer than that of Pershing as I want to pass on our ADP shares to the next generation. Hopefully that will not happen for at least another 20 years!

I don’t think Pershing will bring any added value to the equation by having its representatives on the Board and hope shareholders vote “AGAINST” its shareholder proposal.

I continue to believe ADP is somewhat overpriced and urge caution if you wish to acquire shares. A retracement to the low $90s would be nice which would mean a PE around 24 based on the consensus broker estimated earnings of $3.82 for FY2018.

Disclosure: I am long ADP.