CN Rail – Back on Track

On January 29th I wrote that I had added 400 Canadian National Railway (TSX: CNR)  shares @ $98.20 to a ‘side account’ in the FFJ Portfolio; it is a core holding within the FFJ Portfolio and is one my top 15 holdings within and outside the portfolio.

I like to add to existing positions, or initiate positions, in great companies when there are short-term headwinds. In the case of CNR, my additional purchase at the end of January was timed almost perfectly. CNR was continually in the news regarding operational/customer service issues. Customer complaints started to escalate the Fall of 2017 and severe winter conditions did not help matters; CNR experienced an increase in complaints from grain farmers as well as from the oil and gas industry.

In October 2017, CNR indicated it was on a hiring spree because it didn't have enough crews to handle increased demand prompted by a stronger North American economy. This came after CNR had significantly reduced its workforce in early 2016.

Problems at CNR were so severe that in mid-February 2018, CNR showed a 17% velocity decline YoY compared with a 9% drop for the group average. In addition, there was a dramatic 43% increase in dwell time compared with a 9% increase for the group average. The deterioration in CNR’s performance was so severe that it meant it was doing irreparable damage to shipper relationships and was at a very high risk of losing business to Canadian Pacific Railway Ltd. (TSX: CP).

The deterioration in CNR’s relationship with its customers ultimately resulted in the ousting of CNR’s CEO on March 5th; this CEO had assumed his role in 2016 after having served as the railway's CFO. Prior to being the company’s CFO he had been a senior executive at the related companies Imasco, Imperial Tobacco and British American Tobacco, and also at Power Corp.. This gentleman certainly did not have lengthy work experience in the demanding North American railroad industry.

In late March 2018, a subscriber to my site who belongs to the Thunder Bay chapter of The Grain Elevator and Processing Society (GEAPS), an international professional association that supports its members and the industry by serving as ‘The Knowledge Resource’ for the world of grain handling and processing industry operations, was keeping me updated on the sentiment of the GEAPS members.

On March 28th he emailed me:

“As promised, here is a brief recap of what the sentiment is toward the CNR (post GEAPS meeting last evening). Actually, words cannot describe the amount of actual disgust members of the grain industry have for the company. That has been the story over the years but it has hit a new level here in 2018.

CNR reps didn't even show up but then again neither did the folks from the CPR. I guess they have been beaten on one too many times or they are in such disarray with all the firings/resignations over the past year.”

Shortly after that email he sent me another update:

“Have friends attending GEAPS conference in Colorado and they are reporting it is an excellent conference. As usual, the CPR & CNR reps are taking a trashing - it is one of the grain industry's rallying cries. Competition, ha, they know trucking can't compete and at last report there isn't a barge network operating on the prairies.

As for grain moving, it is just starting to get rolling but already the mighty CNR & CPR are behind schedule...we anticipate a large volume movement this spring as inventories are high on the prairies.”

Below you will find a comparison of various key operating metrics on a quarterly basis for the Q2 2017 – Q2 2018 time frame. The dramatic reversal of the deteriorating metrics is readily apparent!

In my October 27, 2017 post, I touched upon the MLH. I like to include a section in my CNR articles regarding this initiative because it is within a half hour drive from home. This allows me to periodically go to the office which has been set up for the purpose of providing residents with periodic updates.

While the project has not yet received final approval I can assure you it is really necessary to have a Milton Logistic Hub. The current hub in Brampton, Ontario is a HUGE bottleneck!

Further details on this initiative and the reasoning for the need of this new hub can be found here and here.

CNR’s Q2 2018 results released July 24, 2018 can be found here. I also draw your attention to the non-GAAP Measures commentary for Q2 which can be accessed here.

I provide a high level snapshot of CNR’s Q1 and Q2 results so you can see the extent to which CNR’s performance has improved in one quarter; I recognize difficult weather conditions contributed to the poor Q1 results to some extent but you can’t blame the poor metrics entirely on the weather! 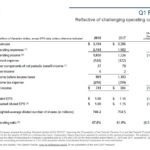 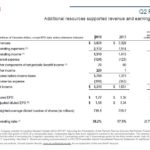 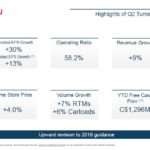 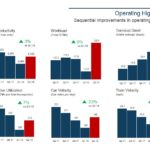 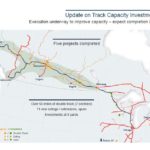 When reading the Q2 results, keep in mind the following comment in the July 24 Earnings Release:

‘Although CN reports its earnings in Canadian dollars, a large portion of its revenues and expenses is denominated in U.S. dollars. The fluctuation of the Canadian dollar relative to the U.S. dollar affects the conversion of the Company’s U.S.-dollar-denominated revenues and expenses. On a constant currency basis, CN’s net income for the second quarter of 2018 would have been higher by C$0.03B, or C$0.04/diluted share.’

In my January 29th article I wrote:

‘A large portion of its revenues and expenses, however, is denominated in U.S. dollars. The FX fluctuation affects the conversion of the Company's U.S.-dollar-denominated revenues and expenses. On a constant currency basis, CNR’s net income for the 3 months and year ended December 31, 2017 would have been higher by C$0.026B (C$0.03/diluted share) and C$0.042B (C$0.06/diluted share).’

When Moody’s initiated coverage in August 1995 it rated CNR’s senior unsecured long-term debt Baa2 (middle tier of the ‘lower medium grade’ rating). That rating remained in effect until March 2003 at which time the debt was upgraded to Baa1. That rating remained in effect until December 2005 at which time another upgrade was made…this time to A3. The A3 rating was upgraded to A2 (middle tier of the ‘upper medium grade’ rating) in August 2014 and that rating is currently in effect.

S&P Global rates CNR’s senior unsecured long-term debt A which is the middle tier of the ‘upper medium’ rating.

The A2 and A ratings are equivalent.

Neither agency has CNR’s credit ratings under review.

These attractive credit ratings confirm neither agency is of the opinion CNR will have any difficulty in servicing its obligations.

There is no denying that CNR is a great railroad and I am cautiously optimistic CNR finally has the right person at the top of the house to repair the damage done on a customer service level under the previous short-lived leadership. As for CNR’s current valuation, however, I think it is just a tad on the rich side. The 5 year average PE is ~19.5 so on the basis of the revised adjusted diluted EPS range of C$5.30 - C$5.45, ~$106 seems like a more reasonable upper end at which I would add to my position. I calculated that figure on the basis of C$5.45 times the 5 year average PE of ~19.5.

The $0.455 quarterly / $1.78 annual dividend represents a ~1.5% dividend yield based on the $116.80 stock price at the time I compose this article. While the yield may be unattractive to some readers I don’t get too worked up on the low dividend yield. I take comfort that CNR has increased its dividend every year since becoming a publicly traded entity more than 20 years ago.

As an investor focused on the long-term performance of my holdings I like to compare how a company has performed relative to the S&P 500 or another major index over a 10 and 20 year period. 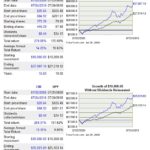 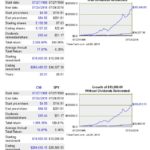 I recognize all the figures reflected in this article are expressed in CDN $ but the site I use to gauge a company’s performance relative to an index uses the US listed shares versus the TSX listed shares. Please keep this in mind when looking at the above charts.

In my opinion, long-term CNR shareholders have been richly rewarded.

I have always viewed CNR has a high quality railroad and this is why I hold a total of >1100 shares.

I think the customer related issues CNR recently experienced was partially attributed to the former CEO not having a ‘rail’ background. The fact the newly appointed CEO was CNR’s former Executive Vice-President and Chief Marketing Officer for the last 8 years suggests CNR’s Board came to the realization that CNR had reached a critical point where it needed a leader who was focused on building the business as opposed to cutting costs; have a look through the ‘Latest News’ releases on CNR’s website starting March 5th (the date the current CEO was appointed as interim CEO) and you will see several Press Releases wherein CNR is investing to improve its rail infrastructure.

Now, while I like the direction CNR is headed, I think the current stock price is just a tad rich. It is not excessively expensive but the shares are no longer ‘on sale’ as they were when I added to my position in late January. Perhaps the recent significant run up in the stock’s price is partially attributed to the fact investors are pleased CNR finally has a CEO who understands the rail business?

CNR is certainly a great long-term investment so if you are inclined to take a position in the company, I would ease in and periodically acquire additional shares on pullbacks.

As for me, I think I have enough exposure to CNR and I will just stick with the automatic reinvestment of my dividends.

Disclosure: I am long CNR.

By Charles Fournier|July 25th, 2018|Equity Investing|Comments Off on CN Rail – Back on Track