On October 24, 2017, CN released its Q3 2017 results. Management indicated it remains on track to see its annual profit grow as demand increases after six quarters of decline. It does, however, have some short term challenges which are being addressed.

The following images provide a glimpse of CN’s expansive network and track record since 2010. 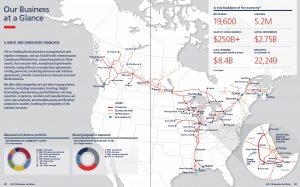 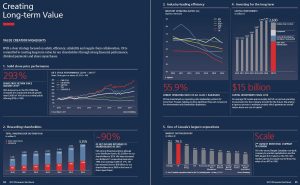 One of CN’s key regions is the Greater Toronto Hamilton Area (GTHA). It is the most heavily populated and fastest-growing region in Canada; the population of the GTHA is expected to increase from 6.6 million to 10 million by 2041.

CN currently services the GTHA through its Brampton Intermodal Terminal (BIT). It is Canada’s largest terminal and it connects the region with 20 domestic trade terminals and 7 CN-served container ports across North America. BIT, however, is nearing capacity and its ability to meet growing demand for container goods in the region is severely constrained.

In order to alleviate the strain on the BIT, CN announced in April 2015 its intent to build the MLH at an estimated cost of ~$0.25B. The process through which CN must obtain approval is extensive; CN is currently in the Environmental Impact Statement (EIS) portion of the Independent Review Panel Process.

The MLH would be built on 400 acres of land owned by CN. Services would complement those currently offered at BIT. The proposed location is adjacent and parallel to the existing CN tracks on land adjacent to CN’s Halton Subdivision, one of CN’s existing mainline corridors in the western half of the GTHA.

If approved, the MLH would operate 24 hours/day, 7 days/week. It is designed to be served by 4 intermodal trains/day and is expected to handle 450,000 containers annually at full operation. NOTE:  One intermodal train can transport the equivalent of 280 long-distance heavy trucks.

Community consultation sessions are currently being held until October 31, 2017. Details on this massive undertaking can be found here. 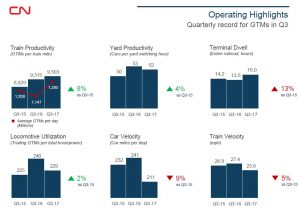 While some metrics improved relative to Q3 2015 and 2016, several metrics deteriorated. One of the metrics which deteriorated from Q3 2016 was the Operating Ratio (54.7% versus 53.3% in Q3 2016) which is defined as operating expenses as a percentage of revenue; a lower ratio is more favorable.

A major reason for same is that CN had an insufficient number of crews to handle the increased demand prompted by a stronger North American economy. This shortfall in crews is because fewer laid-off workers than expected chose to return following a lengthy idle period; steps are currently being taken to address this shortfall.

The following is CN's market outlook for 94% of its business. 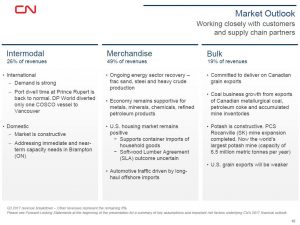 Subsequent to CN's Q3 earnings announcement, Canada's central bank announced on October 25, 2017 that it will keep its key lending rate on hold amid concerns that the average Canadian is overly indebted. In addition, souring negotiations around the North American Free Trade Agreement (NAFTA) are clouding the outlook for the Canadian economy; this could negatively impact CN. 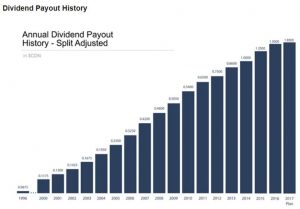 Based on the recent annual historical dividend increases, I suspect CNI will increase its annual dividend ~$0.10 to ~$1.75 (~6% increase) with the increase taking effect with the Q1 2018 dividend payment. Based on the current closing price of ~$104.50 this estimated new dividend would translate into a  1.67% dividend yield. This is comparable to that in FY2012 but is once again short of that in FY2015 and FY2016. 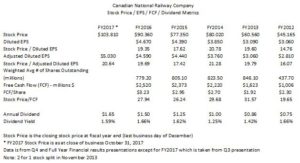 I do not profess to be in the same league as David Einhorn, Seth Klarman, and Paul Singer but my outlook on the state of most stock valuations is similar to their outlook. There are companies whose business model is suspect and whose stock is trading at unreasonable levels. This has resulted in the speculative mentality on the part of many “investors” spilling over into companies with a proven track record which have, do, and will continue to provide essential services despite disruptions in the transportation / logistics industry. If anything, modern technology will help railways become safer and more efficient.

In my opinion, I suspect CN will patiently wait for its share price to pull back before initiating its new round of share repurchases. If I am correct in that CN is likely to patiently wait for a more favorable price range, then it behooves readers to also practice patience.

Should you be unable to patiently wait on the sidelines for a better entry level, I suggest only taking a partial position in CN.

While some investors may think a ~15% drop in CN’s stock price is unrealistic, I am of the opinion it is not totally out of the realm of possibility if NAFTA negotiations do not go well.

I have a relatively full position in the TSX listed CN shares. These shares are held in the FFJ Portfolio and all dividends are being automatically reinvested. Despite my opinion on the price of CN shares being somewhat elevated, I have no intention of discontinuing the automatic dividend reinvestment arrangement nor of selling the shares in the hopes of repurchasing them if/when CN’s share price drops. This "hands off" approach has served me well over the years and I am not about to change.

Disclosure: I am long CN.