CP is a Class I transcontinental railway in Canada and the United States. Its peer group consists of the following:

CP offers a suite of freight transportation services, logistics solutions, and supply chain expertise. It has direct links to eight major ports, including Vancouver and Montreal. Its rail network consists of 12,400 miles of main line track but its reach extends beyond its rail, through connections with other Class 1 railways, short lines, trucking and transload facilities.

On October 9, 2017, CP expanded its reach when it announced a new partnership with Genesee & Wyoming Inc. (NYSE: GWR) and Bluegrass Farms of Ohio. Management has stated that this new partnership will open up the Ohio Valley to its customers and further extend its reach into key North American markets.

CP is aggressively improving its transportation services in the Intermodal space, with a new service offering at the container level; Vancouver is CP’s bellwether. In addition it:

During Hunter Harrison’s tenure as President and CEO, drastic changes were made to the working environment; it was not uncommon to read about low morale.

Positive volume growth was projected and management was confident it would deliver high single-digit EPS growth. Factors that were included in its modeling for 2017 were:

On October 17, 2017, CP released its Q3 2017 results and provided guidance for the remainder of the current fiscal year. 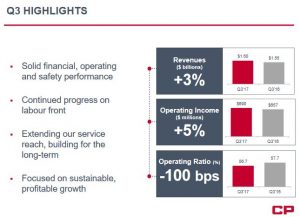 EPS guidance has been raised despite: 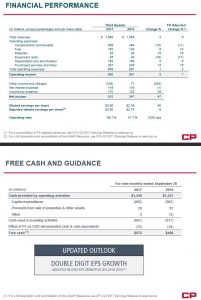 CP’s recent sporadic dividend history can be found here and its CAGR is found below. 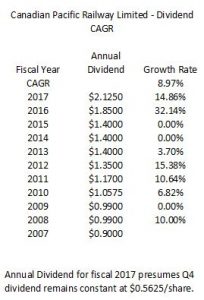 Hunter Harrison was appointed President and CEO on June 29, 2012. Drastic changes were made to the manner in which CP was operated. One dramatic change was an immediate dividend freeze. It was not until mid-2016 when dividend increases were reinstated. In lieu of dividend increases, focus was placed on reducing the number of outstanding shares.

Harrison abruptly departed CP on January 18, 2017. Within 2 quarters of his departure, CP’s dividend was increased.

In Q3, CP took advantage of the pullback in its share price and it repurchased 1.1 million shares at an average cost of $196/share.

FCF and the dividend payout ratio are conservatively managed and there is no concern about CP’s ongoing ability to service its dividend payments.

Using the current stock price of ~$221 and a mean adjusted diluted adjusted EPS of $11.44, we arrive at a PE of 19.32. While not on sale, CP is reasonably priced for investors with a long-term investment time horizon despite the ~5.3% increase in price subsequent to the release of Q3 results.

An alternative to buying CP shares outright could be the use of options.

There are multiple option strategies that can be pursued and the option strategy presented is merely an example of how one can generate income while not owning CP shares outright.

Despite the recent jump in price, CP still represents an attractive purchase at current levels for investors with a long-term investment horizon.

Disclosure: I currently do not hold a position in CP and have no intention of initiating a position within the next 72 hours.