In a recent post, I analyzed Union Pacific (NYSE: UNP), to determine whether it would be a decent addition to our FFJ Portfolio in which we currently hold the TSX listed shares of Canadian National Railway (NYSE: CNI).

In keeping with the railroad theme and given that I periodical analyze the companies in which we currently own shares, I thought I would review CNI to see how it has fared this past fiscal year; it reported FY2016 results on January 24, 2017.

Further to my industry overview found in my recent Union Pacific post, I provide additional information I gathered in response to interesting comments from readers.

A reader brought up the issue of self-driving long-haul trucks which appear to be on the near horizon. While the reader acknowledged that railroads are still more energy efficient, the point about the substantial cost savings of eliminating the driver would presumably be substantial.

Another reader is of the opinion “driverless trucks could have any load from coast to coast within 48 hours. Rail has a limited future.”

In response the above comments, a comment was made that “driverless trucks will be wonderful, until one takes out a family minivan over a snow-covered mountain pass”. In addition, “battery technology” at this stage is such that a coast to coast run in 48 hours would be a stretch.

In my opinion, the benefits offered by rail are such that they will not be displaced by driverless trucks. I think rail and truck transport will continue to coexist for a long time. There is an enormous volume of goods shipped via rail that trucks just would not be able to handle and/or where various governmental agencies would ensure those goods are not transported via truck. Take a look at what freight trains carry (from what you can see without having to open box cars, reefers, and tankers) and you will likely come to the agreement you certainly would not want those goods transported on our roads.

Another reader made a very valid point that for the “Safety” part of my Industry analysis I should have looked at the "reportable derailment incidents" rather than the personal injury incidents. The rail companies indicate they strive to minimize personal injuries and derailment incidents but upon further investigation, it appears they still have a long way to go on this front.

I went to the US Department of Transportation Federal Railroad Administration site and searched for “reportable derailment incidents”. What I found was that if you go to the Accident by State/Railroad item and leave all the search fields blank (ie. generate ALL results), you get a 1404 line item report for the period ending October 31, 2016 (most current data as at the time of my search). I wonder how many incidents were not properly reported.

Clearly the issue is not unique to the US. We have the same issues in Canada. More than 250 rail accidents went unreported by Canadian railways between 2007 - 2013, omissions the country’s transportation watchdog says hinder efforts to improve safety on the railroads.

I think derailment incidents are inevitable and are, regrettably, an issue rail companies will have to contend with for years to come. Until such time as reportable issues no longer occur, the best rail companies can do is to minimize the number and the magnitude of each event.

For more details on CN’s safety record and efforts to improve its Federal Railroad Administration train accident and personal injury ratios, Transport Safety Board of Canada train accident ratio, and reduce the number of crossing and trespassing accidents, you may wish to read an overview of CN’s 2016 Safety Management System. It is a 48 page document entitled Looking Out for Each Other and is located in the “webcasts and events” section of CN’s website.

CN has gone through a remarkable transformation since its inception as the Champlain and St. Lawrence railroad on February 23, 1832. On June 6, 1919, the Canadian National Railway Company was incorporated but it was not until November 17, 1995 when CN was finally privatized. Subsequent to being privatized, CN has expanded its operations and it now has a 20,000 route mile network across North America. The network spans three coasts thus making it the only transcontinental railroad in North America offering a unique network reach.

CN plays a major role in moving traffic to the Greater Toronto Hamilton area (GTHA) and across North America and is the only railway in North America that touches three coasts thus allowing it to reach 75% of North America's population.

An amazing statistic is that CN moves over C$250B of goods every year such car parts, mobile device, food, soap etc..

On a personal note, I live only a 20 minute drive from the new Milton Logistics Hub which will be key to Canada's economic growth in North America and globally. CN is prepared to invest C$0.25B to build this hub.

CNI announced that its Board of Directors approved a 10% increase in the 1/4ly cash dividend. The C$0.4125 per common share dividend will be paid on March 31, 2017 to shareholders of record at the close of business on March 10, 2017. With this increase, CNI’s dividend on an annualized basis is C$1.65/ share.

This dividend increase extends CNI’s record of increasing its dividend annually since its first dividend declaration in 1996.

That was the good news. The bad and the ugly? Check out this chart. 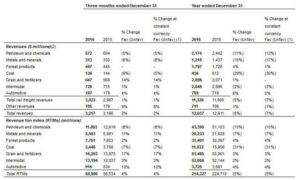 No surprise here. CNI is heavily reliant on Petroleum and Chemicals and Metals and Minerals and we all know how those industries have fared in 2016. Volumes in both categories were decimated. Coal volumes also took a hit. Fortunately, revenue per ton miles increased slightly in the Grain and Fertilizers and Intermodal categories. In addition, CNI tightly controlled its expenses.

CNI has indicated that while the economy remains challenging, it expects moderate volume growth in 2017. It anticipates mid-single-digit EPS growth in 2017 from the adjusted diluted EPS of C$4.59 recorded in 2016.

Investment in the safety and efficiency of CNI’s network will continue with a 2017 capital investment program of approximately C$2.5B. This figure includes increased spending for Positive Train Control technology in the US.

For information on the assumptions CNI used in its projections, please see the January 24, 2017 press release.

While this yield is low for some investors, I draw your attention to my recent Blog Post Low or No Dividend Yield Companies Belong in Your Portfolio.

The TSX listed version of CNI shall remain in the FFJ Portfolio.

It is unlikely I will acquire additional shares in the Canadian listed Canadian National Railway as we already have a full position in this railroad.

Should CNI appeal to you, I would wait for roughly a 10% pull back to the levels reflected in the Valuation section of this post.

Disclosure: I am long CNI.