We currently own shares in only one railroad, the TSX listed shares of Canadian National Railway (NYSE: CNI) in the FFJ Portfolio and no other shares within the Transportation sector. I would like to beef up our exposure to this sector and after a quick review of certain financial metrics for various North American Rail Freight Transport companies, decided to analyze Union Pacific Railroad (NYSE: UNP).

I have been monitoring UNP with the hope of a pullback to a more reasonable valuation level so I can add it to our investment portfolio. Today’s earnings release and the subsequent jump in price has not helped my cause. I am cautiously optimistic, however, of a correction in UNP’s valuation at some stage in 2017.

The North American Rail Freight Transport industry is broken down into three classes:

Class II and III railroads are far smaller in size and geographic coverage. Participants within these 2 classes account for 31% of U.S. freight rail mileage and 10% of employees. The more than 550 short line and regional railroads operate in every U.S. state except Hawaii and often feed traffic to Class I railroads and receive traffic from Class I railroads for final delivery.

The following is the list of publicly traded Class I railroads in North America (all market capitalization figures are expressed in US dollars and are as at the close of business January 19, 2017).

In addition to the cost prohibitive aspect for new entrants to establish a Class I, I view the following as significant advantages when analyzing a potential investment in the North American Rail Freight Transport industry:

Railroads also have their disadvantages:

The following images reflect the “Number of Cars on Line”, “Terminal Dwell”, and "Train Speed” for a 53 week period (CP Rail is excluded).

Number of Cars on Line

As you can see, UNP ranks well with number of cars on line (to be expected since it has the largest fleet), worst on terminal dwell, and middle of the pack on train speed.

While the 6 railroads use the same definitions to calculate their performance data to ensure a high degree of consistency of the measurements. These measures are most useful for examining trends and relative changes.

When reviewing these results it is important to keep in mind that the level of performance between railroads may differ sharply because each railroad is unique. Differences between railroads include terrain, physical routes, network design, traffic mix and volume, the extent of passenger operations, and operational practices. External factors such as weather and port operations can also cause variations between railroads and over time.

On May 10, 1869, after 20,000 men, working 12 to 16 hours a day, seven days a week, for six years, the Golden Spike was driven into the ground marking the completion of a transcontinental route which heralded the Industrial Revolution.

The Union Pacific of today has 44,500 employees and a fleet of more than 8,000 locomotives which travel to 23 states over 32,100 miles of track. A State by State guide which reflects a host of data including the top 5 commodities shipped and received by UNP can be found here (2015 data). 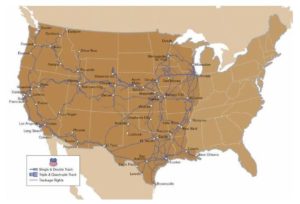 The most recent statistics I have been able to locate which gives an indication as to the age of UNP’s fleet is UNP’s 2015 Fact Book from which I obtained the following image. 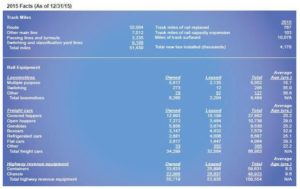 The following is a high level overview of the information obtained from UNP’s website and from January 19, 2017 Q4 2016 Earnings Release conference call/webcast. 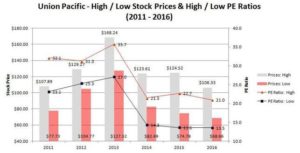 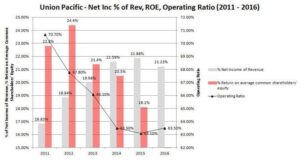 Union Pacific Net Income as a % of Revenue, ROE, and Operating Ratio Metrics UNP aims to increase value in 6 ways with the first being World Class Safety; it is comforting to see that Safety is ranked as UNP’s #1 priority. 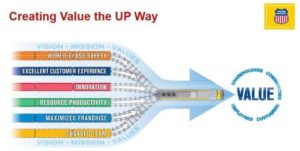 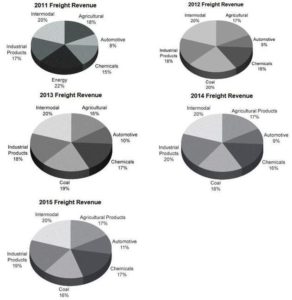 Note the steady erosion in the volume of business UNP generated from the Coal sector. Coal volumes have been plunging in recent years as utilities have switched to burning cheaper natural gas. In addition, the strong U.S. dollar has hurt coal exports. There was no change in this trend in 2016. UNP achieved an operating ratio 63.5% which is well below the 70.70% result achieved in 2011. The operating ratio is an important performance indicator used to determine the level of efficiency in this industry. It is calculated by dividing operating expenses by operating revenues. 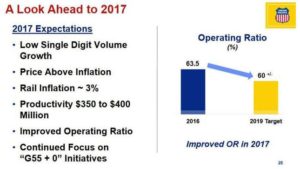 UNP has scaled back its 2017 CAPEX program which is still pending approval from UN’s Board of Directors. The plan is now to purchase 60 locomotives versus 100 with the purchase of these 40 remaining locomotives being delayed to FY 2018. UNP’s management has identified the following which require close monitoring:

The commodities impacted by the proposed re-regulation include crushed and broken stone, coke produced from coal, primary iron and steel products, hydraulic cement, and iron and steel scrap, wastes and tailings. AAR’s concern is the STB has failed to provide sufficient evidence to suggest market conditions of these commodities have changed adversely nor have the commodity groups petitioned for regulation.

The AAR believes the proposed Revenue Adequacy policy is a form of government price control in that Congress has asked STB to cap rates and put a price ceiling on the rates charged by railroads to shippers.

An interesting development in the North American railroad industry is Hunter Harrison’s very recent announcement that he will be departing from CP Rail. Rumour has it that he may land at CSX.

There has been some consolidation in the rail industry over the past several years. As recently as 2016, Canadian Pacific made a run for No. 4 U.S. railroad NSC. This bid failed in the Spring of 2016 in the face of criticism from customers and lawmakers.

On January 19, 2017, UNP’s CEO reiterated that UNP remains opposed to mergers between major railroads in the United States.

UNP is definitely a railroad I will add to the FFJ Portfolio at some stage. Now, however, does not appear to be an opportune time given the somewhat elevated value.

Given the host of concerns railroads currently face and are expected to encounter over the upcoming quarters, I am surprised that UNP is trading at the current PE of ~21.5.

I am cautiously optimistic there will be a market correction in 2017 and will patiently bide my time hoping for a better entry point. A return to the low $90s would be wonderful; recall we were in the low $70s in early 2016.

Disclosure: I am long CNI.

By Charles Fournier|January 19th, 2017|Equity Investing|Comments Off on Union Pacific Stock Analysis – I Continue to Patiently Wait for a Pullback