I periodically check on the performance of the companies in which we own shares. In today’s post I review 3M (NYSE: MMM) which we (my better 50% and me) hold in the FFJ Portfolio and in other portfolios.

What started as a small-scale mining venture in 1902 is now a global powerhouse with operations in 70 countries and sales in 200 countries.

When I look at 3M’s product line, the industries it serves, and its brands (look at the bottom of this page if you want to see the list of industries and brands), I am awestruck.

In Q4, a decline in Organic Local Currency Sales Growth within the Electronics and Energy and Consumer segments was more than offset by sales growth in the other 3 segments. Growth in the US, Asia Pacific, Latin America and Canada offset a reduction in sales growth in Europe, Middle East and Africa. 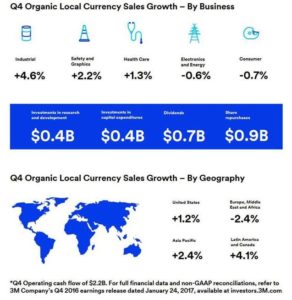 Details on the full year results for each of 3M’s five business segments can be found in its January 24, 2016 Press Release. 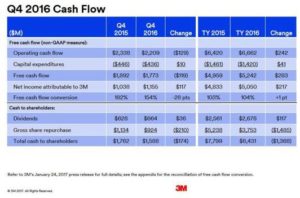 Several companies, including 3M, have been taking advantage of the low interest rate environment to repurchase their stock.

The following chart reflects the change in MMM’s Cumulative Treasury Stock Value, Total Assets, and LTD for FY 2011 – 2015 and Q3 2016. Further details on the rates and maturity dates of 3M’s LTD which 3M has partially used to assist in the acquisition of its shares can be found on page 85 of 132 of MMM’s 2015 Annual Report. Similar details for FY2016 are not yet available.

It is possible that Trump’s proposed tax holiday would allow 3M to repatriate additional money currently held overseas thus enabling it to further reduce the number of outstanding shares.

Given 3M’s track record of using debt to repurchase it shares and its ample FCF, I would be supportive of the continued repurchase of shares. This assumes interest rate arrangements continue to be favorable. 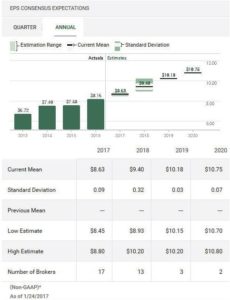 MMM has been one of our long-term core holdings and we fully intend to pass these shares on to the next generation....hopefully in the distant future. I would certainly we willing to add to our position but I think valuations are a bit rich at the moment.

I am cautiously optimistic we will experience a long overdue correction in 2017. Should same occur and shares drop to $164 or less, I will most likely add to our existing position. Until such time, however, I patiently wait and merely continue to reinvest all dividends we receive from our current 3M holdings.

Disclaimer: I have no knowledge of your circumstances and am not providing individualized advice or recommendations. I encourage you not to make any investment decision without conducting your own research and due diligence and consulting your financial advisor about your specific situation.

Disclosure: I am long MMM.

I wrote this article myself and it expresses my own opinions. I am not receiving compensation for it and have no business relationship with any company mentioned in this article.