Canadian National Railway (TSX: CNR) is a core holding within the FFJ Portfolio. It is also a member of the FFJ Master Stock List.

The rationale for CNR being a core component of the FFJ Portfolio is that is possesses a wide economic moat. It has significant cost advantages, extremely efficient, and is arguably the most efficient North American Class I railroad.

Railroads are far more fuel efficient than trucks on a per-ton mile basis. Railways quadruple the fuel efficiency per ton-mile of trucking, they have a lower carbon footprint, have far greater capacity than trucks, are less labor intensive, provide superior on-time performance, and reduce highway congestion.

Railroads are also the only practical method of transporting bulk commodities where there are no rivers for barging.

In 1980, the Staggers Act changed the face of the industry. At the time, there were more than 40 Class I railroad operators. Today, the only major Class I railways in the US and Canada are:

The Class I railroads account for ~69% of U.S. freight rail mileage and 90% percent of employees. They also operate in 44 states across the US and concentrate largely on long-haul intercity traffic.

The Staggers Act allowed private contracts and rate setting. On all but the busiest lanes there is generally a single railroad which serves an end-of-the-line shipper. In North America, only two railroads operate in most regions.

CNR is a unique Class I railroad with an advantage in that its network is T-shaped. It spans Canada from east to west and it stretches from north to south in the Midwestern United States.

An additional barrier to entry is that a railroad requires a massive upfront investment and continuous major capital expenditures. As an example, CNR indicated on its January 23, 2018 conference call that:

CNR’s investment in network-related components such as sidings and double track allows it to safely and efficiently increase train links and tonnage at a rate to accommodate growth at a low incremental cost without the need to necessarily introduce additional trains.

In my October 27, 2017 post, I touched upon the MLH. Further details on this initiative and the reasoning for the need of this new hub can be found here.

In Q4, CNR experienced very challenging operating conditions. At the same time as it had record workload levels in key segments such as Western Canada and the U.S. Midwest, CNR encountered a series of outages on its main line and very cold December weather across the entire network. This reduced train and car velocity and increased terminal dwell.

The operating ratio is a major measure of profitability in the railroad industry. It is essentially a railroad’s operating expenses as a percentage of revenue; the lower the ratio, the better.

CNR typically has a superior Operating ratio than its Class I competitors. 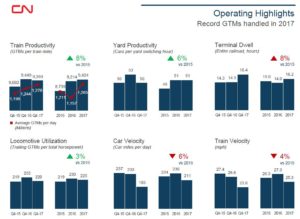 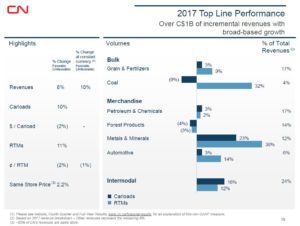 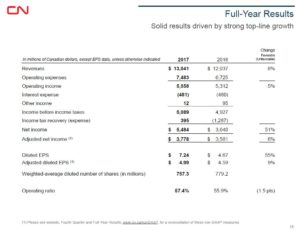 CNR reports its earnings in Canadian dollars. A large portion of its revenues and expenses, however, is denominated in U.S. dollars. The FX fluctuation affects the conversion of the Company's U.S.-dollar-denominated revenues and expenses. On a constant currency basis, CNR’s net income for the 3 months and year ended December 31, 2017 would have been higher by C$0.026B (C$0.03/diluted share) and C$0.042B (C$0.06/diluted share). 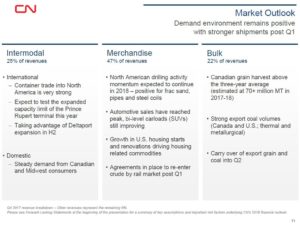 Volume growth in the 3% - 5% range is expected in 2018 although volatility in a number of commodity sectors is expected to persist. In addition, overall price increases should exceed inflation.

Various valuation metrics using FY2017 results and the January 25, 2018 closing stock price can be found below. 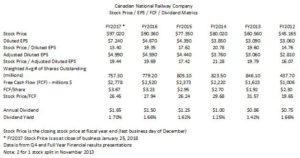 On January 23, 2018, CNR announced that its Board of Directors had approved a 10% increase in the 2018 dividend on the outstanding common shares. The new quarterly dividend of CDN$0.455 will be paid on March 29, 2018 to shareholders of record at the close of business on March 8, 2018. This keeps CNR’s string of annual dividend increases intact subsequent to becoming a publicly traded entity more than 20 years ago.

CNR’s stock price has retraced from a high of ~$106 set early January 2018. In my October 27, 2017 post I indicated an entry point in the low $90s would be attractive. Given the recently announced results and the 10% dividend increase, I view the current level of $97.02 as attractive.

I have purchased an additional 400 shares of CNR.

Disclosure: I am long CNR.