Before you read any further I think it is only fair that I disclose up front that I have been long CHD since 2004 and that it is my 5th largest holding; shares are held in a retirement account and are excluded in any reporting on the FFJ Portfolio.

I also encourage you to refer to previous CHD articles which can be found here, here, and here.

I encourage you to access the FY2017 10-K wherein section 1 (starts on page 4 of 96) provides a comprehensive overview of CHD.

The following also provides a high level snapshot of how CHD has performed from an adjusted earnings perspective over the past several years. 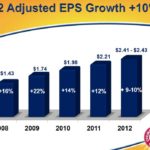 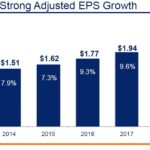 The following graph extracted from the FY2017 10-K also shows how CHD has performed over the past 5 years relative to the S&P500 and its peer group. 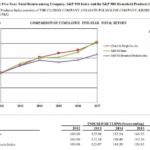 In reviewing CHD’s Q1 earnings announcement you may notice that the Gross Margin decreased 60bps to 44.9% with the decrease being due primarily to higher commodities and transportation costs. If we include the prior year Brazil charge, CHD’s adjusted gross margin decreased 80bps. The 44.9% gross margin, however, is still respectable and is consistent with that reported in FY 2010 – 2015. I, therefore, do not view this drop as alarming.

Management expects full year gross margin to be down 80 bps. The 3 drivers for this drop are:

CHD is now ~85% hedged so management does not expect much volatility going forward.

With the 2017 acquisition of Waterpik, CHD now has 11 Power Brands from which it generates more than 80% of its sales and profits. 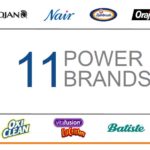 In a nutshell, CHD competes in 14 primary categories and 10 of the 14 grew consumption year over year; more than half of these categories grew at 3% or better. Furthermore, 8 of CHD’s 11 power brands had flat or lower percentage of products sold on promotion in Q1 2018 compared to Q1 2017. CHD also reported that 10 of its 11 power brands grew or maintained market share in Q1.

While CHD performed well in most categories, Specialty Products had a challenging Q1 because the animal productivity business saw a decline in demand due to low milk prices and higher feed costs. CHD’s acquisitions in the poultry business over the last couple of years, however, have reduced CHD’s dependence on the dairy economy.

On the Q1 earnings call, management indicated that a couple of years ago sales declined ~5% when a similar decline in milk prices was experienced. In Q1 2018, the business declined less than 1% which leads management to believe that its diversification moves are working.

Turning to CHD’s August 2017 Waterpik acquisition, CHD had expected the business would grow faster than its evergreen 3% target. Management now expects this business to generate high single digit sales growth in 2018. CHD has found that the business is responding to ramped up advertising; prior to CHD’s acquisition of Waterpik this was largely an unadvertised business.

CHD views Waterpik as a global opportunity and is laying the groundwork to sustain strong growth, particularly in the international markets where household penetration is much lower than the U.S..

As noted in previous articles, CHD pales in size relative to the likes of Procter and Gamble (NYSE: PG) and Unilever (NYSE: UL and NYSE: UN), and others. 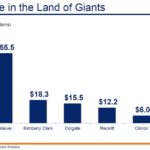 While CHD pales in size to members of its peer group, readers should take into consideration that the size of a company does not necessarily translate into superior results.

One of the advantages CHD has over some of its larger peers is that it has low exposure to private labels relative to this peer group.

If we compare CHD’s performance relative to other members within the Consumer Staples group we see that CHD has actually performed reasonably well. CHD is down 5.51% over a 1 year period while this sector as a whole has generated a -10.69% return. 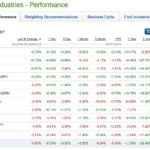 One metric to which I pay particular close attention is a company’s ability to generate FCF; CHD is particularly strong in this area. The following chart reflects the extent to which CHD stands relative to other members of the Consumer Staples group from a Revenue and FCF conversion perspective. 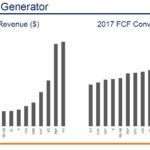 The following reflects the extent to which CHD has shortened its cash conversion cycle in recent years! 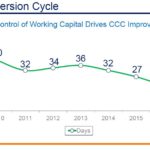 Looking at Q1, CHD generated $0.155B of net cash for the quarter; this was a $0.024B increase from the Q1 2017. This was largely due to higher cash earnings and lower working capital.

In my recent High-Yield Corporate Bond ETFs – Understand the Risks article I shared my thoughts on risky investments (and also included a credit rating chart for Moody’s, S&P Global, and Fitch which I suggest you keep handy for future reference). While higher risk investments might be acceptable to some readers, they certainly do not suit my investor profile. I am retired and I have absolutely no intention of EVER going back to work to recover any investment losses because I stepped out of my comfort zone. This explains why I look at a company’s credit ratings while many other bloggers tend to skip this aspect of the investment analysis.

When I initiated my CHD investment in 2004, Moody’s rated CHD B1; my risk tolerance back then was greater than today. Over the next 14 years CHD has been upgraded by Moody’s to the point where CHD’s long-term debt is rated Baa1 which is classified as lower medium grade. Standard & Poors rates the debt BBB+ which is also lower medium grade. Neither agency has CHD’s debt under review.

Given CHD’s outlook I view the above ratings as acceptable. If CHD had been rated A1 or better back in 2004 and had been lowered to the current ratings I would very likely have a different opinion about CHD’s credit risk.

What also appeal to me about CHD is that is has significant financial capacity and management plans to deleverage the balance sheet over the next few years. 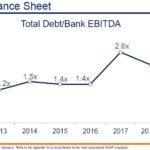 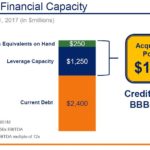 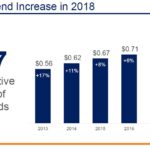 Many investors will overlook CHD because of its sub 2% dividend yield. While the dividend yield might be unappealing to many investors, I can assure you that long-term investors who overlooked CHD’s typically low dividend yield several years ago have been handsomely rewarded. I know the past does not predict the future but with CHD’s dividend track record you get some comfort that management will likely stick with what has historically worked well.

Given that little has changed from an earnings forecast perspective in the last couple of months, I encourage you to refer to my February 7, 2018 article for details on CHD’s dividend payout ratio.

Please review my February 7, 2018 CHD article for comments on this topic. At the time of that article I indicated that CHD has repurchased a considerable number of shares over the years. In fiscal 2011 the weighted average shares outstanding (Basic and Diluted) amounted to 286.4 million and 291.6 million, respectively. In fiscal 2017, these figures were 250.6 million and 256.1 million. As at the end of Q1 2018 these figures have been reduced to 244.9 million and 250 million.

Management still has the same adjusted EPS outlook and CHD is currently trading at $47.73. There is not, therefore, much difference in valuation from that reported in my February 7, 2018 article.

CHD very rarely goes on sale. If you are waiting for CHD to have a forward PE ratio in the teens before you initiate a position or intend to acquire additional shares, you will likely be waiting a long time. Even at the height of the Financial Crisis CHD’s PE ratio was ~18 - ~19. I, therefore, view the current valuation as reasonable.

It is entirely possible that some readers may have disagreed with my take on Procter & Gamble (NYSE: PG). While PG is much larger than CHD it certainly is difficult to justify an investment in a shrinking company when compared to a growing company. CHD pales in comparison to PG on many fronts but what appeals to me about CHD are its long-term growth prospects, reduced share count, and increasing dividends…even though the dividend yield is low.

Despite my impressive returns with CHD, I have endeavored to temper my enthusiasm about this company’s long-term growth prospects when writing this article. Do not initiate a position in CHD simply based on this and previous CHD articles. Please review the documents to which I have provided links and conduct your own due diligence.

On February 6, 2018 I acquired another 200 CHD shares. I am of the opinion that I have enough shares and will restrict any addition to my CHD position to the automatic reinvestment of dividends.

By Charles Fournier|May 8th, 2018|Equity Investing|Comments Off on Church & Dwight – A Better Option Than P&G