In late 2005, when I looked into the company which owns the Arm & Hammer brand, I realized I had been remiss in not investing in Church & Dwight Co. Inc. (NYSE: CHD). CHD certainly was not inexpensive when I pulled the trigger in 2005 but without a doubt, CHD has rewarded us over the years; our average cost is $9.524 and the current price is in excess of $47.

Since I like to periodically review the performance of the companies in which we hold shares and CHD released its Q4 and FY2016 results February 7, 2017, I provide this post for your review and feedback.

CHD operates in a land of giants. Page 15 of CHD’s 101 page Powerpoint presentation from the September 6, 2016 Barclays Global Consumer Staples Conference gives you some perspective as to where CHD stands in size relative to the companies it considers to be its most significant competitors. 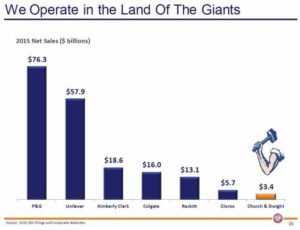 Morningstar has a much longer list of peers which can be found here.

CHD, founded in 1846, has since become one of the leading consumer packaged goods companies in the U.S.. It manufactures and markets a broad range of leading household, personal care and specialty products to consumers and business customers in 115 countries. The company operates under three major divisions: 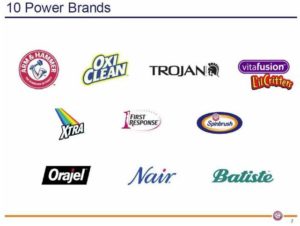 What drew me to this business was the “one-time use” of all its products. If you use some of CHD’s products, I trust you are aware of the one-time use nature of them. Note: An open box of ARM&HAMMER baking soda is not meant to remain in the fridge for a year. 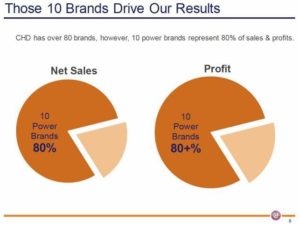 CHD has also grown dramatically through the acquisition of key brands; it has acquired 9 brands since 2000. 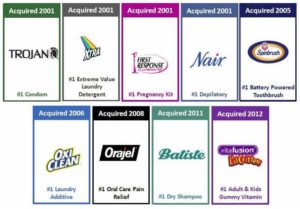 CHD only has 18% of its sales coming from foreign economies so it has not experienced exposure to FX risk and weak economic conditions in various parts of the globe to the same extent as its larger competitors.

Highlights of CHD’s results are provided below. Please see its February 7, 2017 Earnings release for more details.

The increase in the dividend payout from $183MM to approximately $195MM allows CHD to maintain a 40% targeted payout ratio.

CHD expects to generate over $1.8B in FCF over the next three years.

In addition to expanding the combinations and permutations of its existing brands, CHD is acquiring additional brands.

Some readers will be pleased to note that on December 22, 2016, CHD acquired the ANUSOL and RECTINOL brands from Johnson & Johnson  (NYSE: JNJ) for $130MM. These are the #1 or #2 hemorrhoid care brands mainly sold in the U.K., Canada, Australia and South Africa with 2016 annual sales of $24MM. This will add scale to CHD’s growing international division. No, I don’t need to run out and get some.

On January 17, 2017, CHD acquired the VIVISCAL business from Lifes2Good Holdings Limited for $160MM. This is the #1 non-drug hair care supplement brand mainly sold in the U.S. and the U.K. with annual 2016 sales of $44MM. This brand is complementary to CHD’s global BATISTE dry shampoo (#1 U.S. share position) and TOPPIK hair care business. I have a full head of healthy hair but I might check it out.

The all important adjusted FCF is expected to exceed adjusted net income. This is similar to previous years.

In Q1 2017, CHD expects reported and organic sales growth of approximately 1 - 2%, gross margin expansion and a 7% increase in EPS to the $0.46 level. Flat EPS is expected in the first half of 2017 as CHD significantly increases Q2 advertising and marketing expenditures in support of new product launches, in particular the all exciting cat litter innovation that cats have been clamoring for.

Today’s earnings announcement has resulted in CHD’s shares jumping almost 3.5% to just over $47. That certainly does not help those who wish to initiate a position or who want to increase their position. 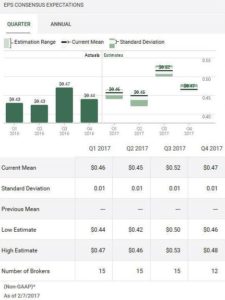 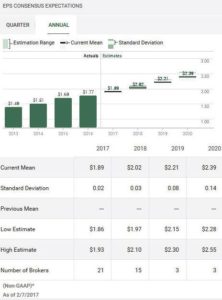 At $47/share and a $1.89 estimated adjusted EPS for FY2017, the forward PE is just under 25. I view this level to be greater than my preferred PE target which is sub 20. Unfortunately, CHD is one of those companies that very rarely witnesses such a low PE. In the last several years, I think CHD was only priced at a reasonable level during the Financial Crisis.

I recognize the markets will likely correct at some stage and CHD’s stock price may be caught in the downdraft. If you think the same way, you may likely decide that you will patiently wait on the sidelines.

My suggestion is that you currently initiate a small position in CHD (yes, even at these elevated values). If/when there is a market correction, you can certainly back up the truck and acquire more shares at lower prices.

This dividend yield will turn off many investors. If you happen to think this way, may I suggest you quickly read my Low or No Dividend Yield Companies Belong in Your Portfolio post before you completely rule out CHD.

I have absolutely no idea in which direction stock prices are headed. I do know, however, that CHD’s underlying business is sound and that it will most likely continue to grow and to reward shareholders.

If you are adamant that you do not want to buy CHD at these levels but you would like to own CHD at a slightly lower level, you may want to consider selling a July 21, 2017 put with a $45 strike price. By doing this, you are giving someone the right to sell CHD shares to you at $45 up until expiry. 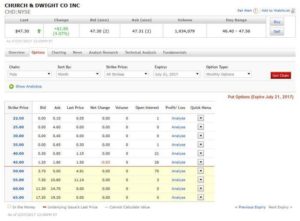 You will at least earn some premium but it means you will tie up some money for a period of time since your broker will want to ensure funds are available if CHD drops below $45.

While you can certainly sell puts at lower strike prices, the premiums are so low it probably isn’t worth the time and effort. The premium for a July 21, 2017 put with a $35 strike price last traded at $0.30 as I compose this.

The reason the premium is so low is that nobody in their right mind will take you up on your offer to sell their shares to you at $35 if CHD continues to trade at current levels. They will just merely let their right to sell you shares at $35 expire worthless. At such a low strike price, you will likely just end up collecting the option premium but you will never end up owning CHD shares (unless something dramatic occurs in the world to send the markets in a tailspin).

One of the things that appealed to me the most about CHD when we decided to initiate a position in this company in 2005 (owned outside the FFJ Portfolio) is that it produces and sells products where strategic meetings are not required. Unlike purchasing large ticket items where the thought process may be extensive and lengthy, purchasing detergent, kitty litter, birth control, and personal hygiene products does not require a family meeting. If you decide that you want to forego the purchase of antiperspirant, for example, it won’t be long before some suggest you address the odour issue. Because CHD’s products are not major capital expenditures, CHD does not need to convince you that you need to buy the product. It just needs to convince you to buy its product.

This company probably flies under the radar screen of most investors because of its size (sub $12B market cap), consistently high PE, and low dividend yield. It is, however a wonderful company that generates strong results, including strong cash flow, year after year.

In all the years we have owned CHD shares we have continually DRIPed our dividends. Had we not done so, it is possible I may have repeatedly hesitated to reinvest the quarterly dividends because I was always concerned that CHD was too expensive. That would have been a real shame.

Don’t concern yourself with the sub 2% dividend yield. I can categorically tell you that with the steady dividend increases and the two “2 for 1” stock splits that have occurred during the period in which we have owned CHD, our quarterly dividend income has increased more than 7 fold to just over $550/quarter.

If you currently own CHD, keep it. If you don’t, you may want to initiate a small position and gradually increase your holding over time with larger purchases on dips.