Skip to content
Home » W.W. Grainger – Zig When Others Zag
Previous Next

W.W. Grainger – Zig When Others Zag

GWW's management has indicated that the company is trending to the high side of its earnings guidance which was communicated in July 2018.

I view the October 16th $38 pullback in GWW's stock price as a buying opportunity.

For several years I felt the ‘work thing’ was far overrated. When my dream of early retirement and ‘buying my life back’ finally came true just over 2  years ago I vowed I would do my utmost not to put myself in a predicament where I would HAVE to go back to work. Quite frankly, if it ever reached the stage where I HAD to go back to work I would likely go bungee jumping without a cord.

This brings us to the subject matter of this article….W.W. Grainger, Inc. (NYSE: GWW).

GWW has been on my ‘watch list’ for almost a year. During this timeframe, I have watched GWW’s stock price appreciate in value. When I have looked at the numbers, however, I have come away with the opinion that the company was overvalued.

As recently as mid-August 2018, GWW was trading above $370. After the release of Q3 results on October 16th, however, the share price dropped to ~$280; this price drop has triggered the ‘Watchlist Alert’ I created thus the prompting me to revisit GWW.

GWW, founded in 1928, is a broad line, business-to-business distributor of maintenance, repair and operating (MRO) supplies and other related products and services. Its operations are primarily in the US and Canada, with a lesser presence in Europe, Asia and Latin America. 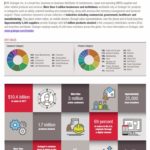 In addition, you can find GWW’s Fact Book on its website. It is outdated from a financial perspective but it does provide investors with an overview of the company’s strategy and the manner in which it plans to create shareholder value.

There are 2 reportable segments:

The majority of products sold by the U.S. business are nationally branded products. In addition, 22% of 2017 sales were private label MRO items bearing Grainger’s registered trademarks.

The U.S. business purchases products for sale from more than 2,600 suppliers, most of which are manufacturers. Through a global sourcing operation, the business procures competitively priced, high-quality products produced outside the U.S. from approximately 400 suppliers. No single supplier comprised more than 5% of total purchases and no significant barriers thus far exist with respect to sources of supply.

2017 sales were made to~1 million customers averaging 113,000 daily transactions. No single customer accounted for more than 4% of total sales.

GWW’s most recently issued catalog (February 2018) offers ~365,000 MRO products and is used by customers to assist in product selection; it includes ~24,000 new items.

Acklands, founded in Winnipeg in 1889, was sold to Grainger in 1996 at which time the name was amended to Acklands-Grainger Inc..

This is Canada’s leading broad line MRO distributor. Much like the US segment, it provides a combination of product breadth, local availability, speed of delivery, detailed product information and competitively priced products and services.

GWW estimates the Canadian market for MRO products in FY2017 was ~$11B, of which the Canadian business share was ~7%.

This group of businesses generated in excess of $0.1B in revenue in FY2017.

This is an online MRO distributor primarily serving U.S. customers through its website, Zoro.com. It has no branches or sales force, and customer orders are primarily fulfilled through the U.S. business supply chain. It offers a broad selection of more than 1 million products.

GWW operates in Japan and other Asian countries primarily through its majority interest in MonotaRO.

MRO products are provided primarily through its catalogs and websites with the majority of orders being conducted through Monotaro.com. Customers have access to ~13 million products.

GWW estimates the Japanese market for MRO products in FY2017 was ~$42B of which MonotaRO’s market share was ~2%.

GWW completed its acquisition of Cromwell in September 2015 for ~$0.482B. At the time of the acquisition, Cromwell’s online sales only amounted to ~5% of its annual ~$0.44B in sales and the strategic rationale for the acquisition was as follows: 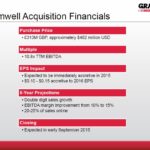 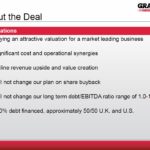 Cromwell is a broad line MRO distributor in the UK that serves ~130,000 customers who have access to ~170,000 MRO products through a catalog and through Cromwell.co.uk.

In November 2017, Cromwell launched a new brand and website (Zoro.co.uk) and its customer orders are primarily fulfilled through the Cromwell business supply chain.

Judging from GWW’s stock chart, it would appear that peak pessimism from the investment community was evidenced in the summer of 2017 when GWW’s stock price was knocked back to the ~$163 level. This is around the time when GWW announced it was accelerating price reductions across its product portfolio to improve its competitive positioning.

While there are low barriers to entry in the product distribution business and customers and suppliers have some degree of bargaining power, GWW has managed to navigate these headwinds and historically generate decent returns.

It would, however, be naïve to think that GWW’s business going forward will not be impacted to some extent by the growing popularity of e-commerce. I suspect GWW will find the next 10 years to be more challenging than the past 10 years but I see GWW’s competitive strengths relative to its smaller competitors (HD Supply Holdings, MSC Industrial Direct, Applied Industrial Technologies, WESCO, Anixter International) giving it some cost advantages; I view Fastenal (NYSE: FAST) as being a superior competitor than the aforementioned peers. 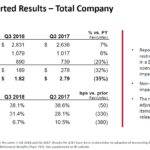 While tariffs certainly impact GWW’s business, GWW is managing its business to account for this headwind. Fortunately, Goodwill and Intangible Assets only represent ~7.25% and ~8.1% of GWW’s Total Assets (after the impairment charges) as at the end of Q3 2018.

At the time of the Cromwell acquisition, GWW’s 5 year projections called for:

The Cromwell acquisition, however, has faced some headwinds thus resulting in the write-down. The majority of the reduction in valuation is attributed to a slower growth trajectory and structural issues which include prolonged Brexit uncertainty; this uncertainty has impacted the market outlook and has resulted in higher discount rates.

NOTE: This is the second time within a month where a company I have analyzed has recognized a multi-million dollar Goodwill and/or Intangible Asset impairment charge. The other time was with Korn/Ferry (NYSE: KFY) but management had previously warned about this write-down and the rationale for the write-down was different from that at GWW.

For the 9 months ending September 30th, GWW has generated the following: ‘Finally, in July, we gave EPS guidance of $15.05 to $16.05. Further, we mentioned that it did not include the tax benefit from stock-based compensation for the second half. We’ve stayed away from predicting the exercise of stock-based awards, which is inherently difficult. Excluding that benefit, which was $0.14 in Q3, we are trending to the high-end of our guidance. As a reminder, we will provide 2019 guidance on our Q4 earnings call in January.’

What difference a day makes!

The $38 one-day drop in GWW’s stock price has certainly made a difference. Had I purchased GWW shares October 15th I would have acquired shares in a company with a forward diluted PE of 20 ($318/$15.90).

The website from which I have sourced the following images has not yet been updated to reflect the significant pullback in GWW’s stock price. I recognize the pullback in GWW’ stock price in 2016 – 2017 certainly negatively impacts GWW’s performance relative to the S&P500 but I don’t invest for the short-term. I focus on GWW’s potential returns over the long-term. GWW’s dividend and stock split history can be found here.

GWW has a double digit dividend CAGR when analyzed on a 10 and 20 year basis. Growth, however, has dropped dramatically over the past few years. After the $38 drop in GWW’s share price to ~$280, the $5.28 dividend now provides investors with a ~1.9% dividend yield which will be less than enticing for yield hungry investors.

GWW continues to use the cash generated to invest in the business, repurchase shares, and distribute dividends. In Q3, GWW allocated $66 million toward CAPEX, $77 million toward dividends, and $82 million to buy back 243,000 shares; the weighted average shares adjusted for dilutive securities for the 9 months ending September 30th amounted to 56.589 million (~78 million shares were outstanding as at FYE2008).

I have found it increasingly difficult to find attractively valued companies so I was pleasantly surprised to see the extent to which the investment community reacted to GWW’s Q3 2018 Earnings Release. In hindsight I should have acquired shares when shares took a hit in 2016 – 2017 which is when many expressed concern that GWW’s business would suffer with Amazon’s entry into the Industrial Equipment – Wholesale industry.

With GWW having now retraced to a far more reasonable valuation relative to that of the past few months, I have initiated a position. I have purchased 200 shares @ $274.75/share which are held in ‘side accounts’ within the FFJ Portfolio.

Disclosure: I am long GWW.

By Charles|October 16th, 2018|General Investing|Comments Off on W.W. Grainger – Zig When Others Zag