I Am Concerned About The Recent Rapid Increase in Stock Valuations

I am concerned about the recent rapid increase in stock valuations. My concern started in mid-2016 and has accelerated subsequent to the US Presidential Election.

Reasons for My Concern

Our portfolio generates annual dividends in the low 6 figures. The total value of our portfolio, however, has increased by the mid 6 figures within the 13.5 month period of December 31, 2015 to February 13, 2017.

Subsequent to the US Presidential election in early November 2016, a significant proportion of the shares we own have exhibited a dramatic increase in market value.

The following chart reflects a few of the companies in which we hold shares and the percentage increase in the value per share during the subject timeframe. 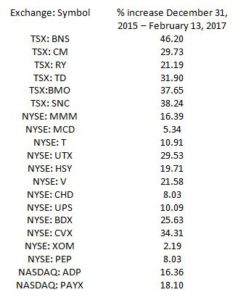 An argument could be made that perhaps the run-up is attributed to market prices being depressed as at December 31, 2015. While this is possible, I don’t think this is the reason for the dramatic increase.

I think we are overdue for a stock market correction is since it was roughly 8 years ago when the S&P 500 last experienced a correction of any magnitude. This interactive chart shows the annual percentage change of the S&P 500 index from the last trading day of the year relative to the last trading day of the previous year. As you can see, 8 years between major market corrections is somewhat longer than the norm.

Another reason for my concern is what I perceive to be a level of investor  complacency. When I look at the CBOE Volatility Index (VIX), which measures the market's expectation of stock market volatility over the next 30-day period, I see current levels are near an all-time low.

Look at the VIX graph. You will see that the VIX spiked in early November 2016 (above 23). This coincided with the US Presidential Election.

The VIX has subsequently dropped to its current level just above 11. This implies investors currently perceive little risk/volatility.

When I see a volatility index reading this low and I hear what comes out of Washington, I truly feel we can expect a market correction. It would appear I am not the only person with this train of thought.

An argument could be made that I should sell our holdings and move entirely to cash if I expect a market correction. This strikes me as irrational as it implies I can predict the direction of the market. I certainly can not do this.

I am not a market expert nor do I view myself as a contrarian investor. I do, however, perceive myself to be a rational investor.

I will remain fully invested and will continue to automatically reinvest our dividends. No new money will be invested, however, until such time as I feel stock valuations have retreated to levels that more accurately reflect the underlying businesses.

I would be interested in hearing your point of view on this matter.