National Bank of Canada (TSX: NA), Canada’s 6th largest bank by market cap, reported Q2 2017 results on May 31st. A link to the Earnings release can be found below in the Q2 2017 Financial Results section of this post. 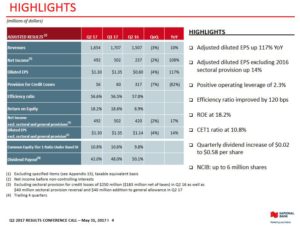 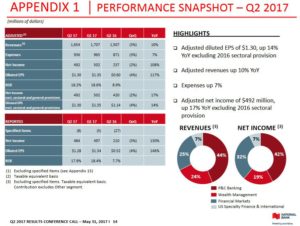 While I touch upon various topics that impact the Canadian Banking Sector and the top 6 Schedule I Canadian Banks, I strongly encourage you to listen to the NA segment of the March 29 and 30, 2017 National Bank Financial Markets – 15th Annual Financial Services Conference where Louis Vachon (President & CEO) discusses a wide range of topics. There is far too much information covered in this ~35 minute segment for me to give the content justice in this post.

In his presentation he touches upon:

In addition, he discusses NA’s 3 priorities with respect to the deployment of capital. In order of priority, they are:

Details on the Canadian Banking Sector can be found here.

Details about the Technological Innovation the Canadian banks are undertaking can be found here.

Many readers may not be entirely familiar with NA given that it is small relative to its peers and its North American geographic presence is somewhat limited. In addition, it is not listed on a US exchange so it very likely flies under the radar of many US investors. I, therefore, provide a link to NA website which shows some of its strategic milestones.

In part 5 of this series I discussed The Bank of Nova Scotia’s (TSX: BNS) preferred regions for strategic growth. NA’s international expansion in recent years has been in Cambodia and in a financial group headquartered in Abidjan, Côte d’Ivoire (French speaking Africa), with operations in 12 countries across West and Central Africa.

Further details can found in the first few pages of NA’s 2016 Annual Report.

Readers are encouraged to review NA’s May 30, 2017 Earnings Release, Earnings Presentation, and to listen to the conference call.

In addition to touching upon the Capital Measure Ratios for NA, you can find more information here. 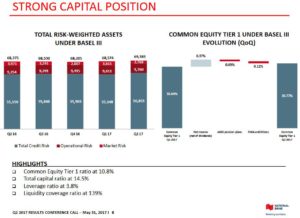 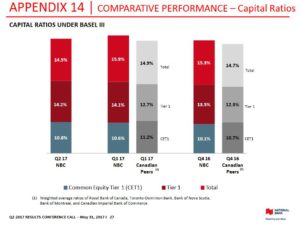 You like numbers? A host of numbers can be found in Excel files right here! Knock yourself out.

A brief overview about a few major Recent Events in the Canadian Banking Sector can be found here.

As to whether the Home Capital problems in Canada will spillover to the Big 6 banks, here is a recent article which supports my opinion that the Big 6 will be just fine.

Given the impact the US real estate bubble had on the US Banking sector, it is only fair that people should be wondering what would happen to the Canadian financial institutions if the grossly inflated real estate values in various major centres in Canada were to experience a correction. 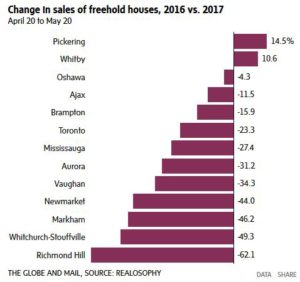 In addition to my opinion on this topic which can be found here, I have very recently attended Open Houses (a community on the outskirts of Toronto) so I could speak with various real estate agents and brokers. All have indicated they have noticed a marked change in the last couple of months. Buyers appear to be less aggressive and in all cases, Open Houses are getting much less foot traffic. They have also commented that there is concern that some buyers may be willing to risk the loss of their deposit and will just walk away from their offers.

Fortunately, NA’s exposure to real estate in the GVA and GTA markets is far lower than its peers. While real estate values have certainly increased in the Greater Montreal Area (GMA), housing is generally more affordable. Another comforting fact is that NA’s average LTV on its uninsured mortgages and HELOC portfolio in the GVA and GTA is 46% and they only represent 7% and 2% of the total portfolio. 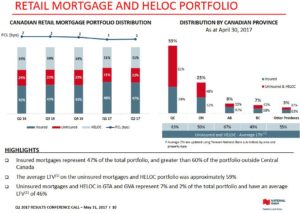 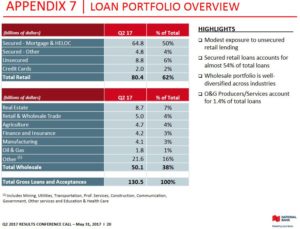 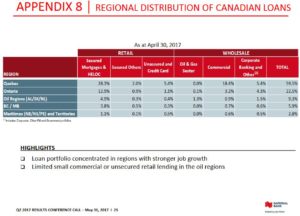 There are a host of risks the Canadian financial institutions face. Global uncertainty, Brexit, Oil & Gas, Cyber risk, anti-money laundering, renegotiation of NAFTA, and the increasing complexity of regulation are just a few of these other risks.

Readers are encouraged to review the 29 page “Quarterly Slides” presentation found here as there are multiple pages that provide details addressing the quality of NA’s loan portfolio. There are also multiple pages in NA’s 2016 Annual Report addressing NA’s Risk Management. Page 9 of 202 pages of the Annual Report lists the locations of the disclosures within the report.

Unlike many foreign banks which were forced to dramatically reduce or suspend their dividend during the Financial Crisis, NA and its Canadian counterparts froze their quarterly dividend. In early-2011, NA reinstated dividend increases.

Readers should note that the quarterly dividend paid on NA’s common shares have been adjusted to account for 2 for 1 stock splits on February 12, 1987 and February 13, 2014.

In addition to a spotty dividend history, NA’s dividend increases are somewhat lower than its larger Canadian peers.

As I compose this post, NA’s dividend yield is ~4.2%. This is ~50 basis points higher than peer levels with the exception of Bank of Montreal (TSX: BMO) (~4%) and Canadian Imperial Bank of Commerce (TSX: CM) (~4.8%). I do not view NA’s positive yield variance relative to The Royal Bank of Canada (TSX: RY), The Toronto-Dominion Bank (TSX: TD), and BNS as sufficient to warrant NA’s weaker dividend history.

On May 31, 2017, NA announced that its Board had authorized a normal course issuer bid to purchase for cancellation up to 6,000,000 of its issued and outstanding common shares which represents approximately 1.76% of its 341,517,603 issued and outstanding common shares as at May 23, 2017. This normal course issuer bid is subject to the approval of the Office of the Superintendent of Financial Institutions Canada (OSFI) and the Toronto Stock Exchange (TSX). 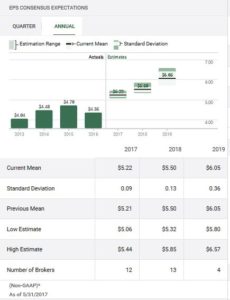 As I compose this post, NA is trading at ~$53.3 on the TSX thus giving us a forward PE of ~10.2. When I look at the high/low PE ratio levels for the past few years I view the current level as slightly elevated but not totally unreasonable.

I can see how NA would be an appealing investment for some investors. It:

I, however, have no desire initiate a position in NA any time soon and my reasoning is as follows:

Conclusion - Ranking of the Big 6 Banks

After completing my analysis of the Big 6 Schedule I Canadian Banks, my opinion on each is as follows (ranked in order of personal preference):

#1 - RY has a well diversified book of business and has historically been the premiere Canadian bank. It represents a great long-term investment.

#2 - TD has done an amazing job in growing its Wealth business and in becoming a solid bank in the NE part of the US. It certainly is a very different bank from when I started working there in 1987; I moved to BNS in early 2004. This bank represents a great long-term investment.

# 3- BNS is my 3rd rated stock. I like its geographic footprint in that it is focused on markets where the demographics are right and the middle class is growing (Mexico, Chile, Peru, and Colombia). In my opinion, the Caribbean region is definitely not where I would want to be a premiere bank but since BNS has been entrenched in that region so long and it already has a solid footprint, I think senior management has no intention of pulling up stakes. I am also encouraged that the bank is becoming more focused on the geographic regions in which it wants to operate as opposed to stretching itself too thin. BNS also represents a great long-term investment.

As for #4 - Bank of Montreal (NYSE: BMO) and #5 - Canadian Imperial Bank of Commerce (NYSE: CM), you will likely do well long-term by owning shares in these two banks. Based on my qualitative analysis, however, they are not nearly attractive as RY, TD, and BNS.

I started my career with BMO in 1980 and for the last ~37 years, BMO just seems to have plodded along. It acquired Harris Bank in the US in the early 1980s and Marshall & Ilsley in 2011 and, in my opinion, BMO’s success in the US pales in comparison to that of TD.

As for CM, this is another Canadian bank that just seems to plod along. It certainly provides investors with an attractive dividend yield but as far as the growth of its share price since 1999, results have fallen short relative to its larger peers.

I am hopeful CM’s acquisition of PrivateBancorp (NASDAQ: PVTB) will help it in the long-term but am concerned CM has overpaid for this bank. I think the US market is “overbanked” and CM is going to find it a really tough slog integrating this bank into its existing operations.

As for #6- NA, it is not a terrible bank. I just don’t recommend it as a core investment since I do not view it as being strategically positioned for future growth to the same extent as RY, TD, and BNS.

Some of you may be wondering “OK, if you don’t think BMO and CM are decent investment opportunities why do you own shares in these two banks?”

Good question. The reason my wife and I still own shares in these two banks is that a sizable component of our equity portfolio was acquired many years ago and we are being rewarded handsomely from a quarterly dividend income perspective. Secondly, we significantly increased our equities exposure at the height of the Financial Crisis. Valuations when we acquired our shares were far, far different from current levels. Back then, fear gripped the markets. Today, too many investors are euphoric and think values can only go in one direction.

If you are hell bent on initiating or increasing positions in any of the banks I have analyzed in this series, I suggest your purchases be gradual. I certainly do not have a crystal ball but I suspect a major market pullback (also see here and here and here and here) will come about within the next 12 months. As if that isn’t enough, the International Monetary Fund has recently expressed concern about the Canadian economic outlook.

There you go...my take on the Canadian banking sector.

Note: I hope you enjoyed this series and sincerely appreciate the time you took to read these posts. Hopefully you came away with some new information to help you in your decision making process.

As always, please leave any feedback and questions you may have in the “Contact Me Here” section to the right.

Disclosure: At the time of writing this post I am long CM, RY, BMO, TD, and BNS.