Recently PAA Research (“PAA”) based in Atlanta, Georgia released a report suggesting investors are being presented with an opportunity to profit by shorting (please listen to video) the Canadian banks.

Prior to reading this analysis on The Bank of Montreal (TSX: BMO), you are encouraged to read my recent analysis on The Royal Bank of Canada (TSX: RY) in which I present my take on why shorting the Canadian banks stocks is not a recommended course of action.

BMO’s FY2017 results generated mixed reaction from Bay Street analysts. While BMO’s business is growing, BMO has a reinsurance business which took a $0.112B charge ($0.17/share) as a result of losses related the hurricanes in the Gulf of Mexico area. 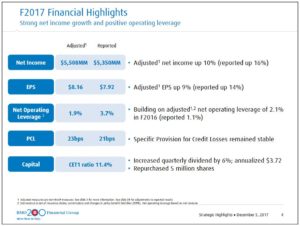 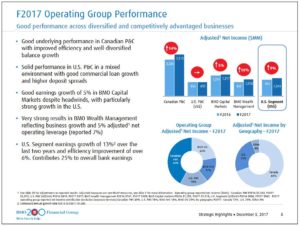 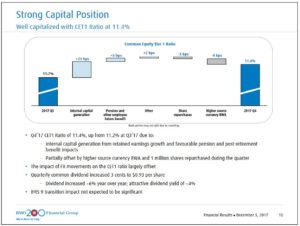 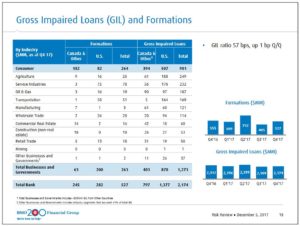 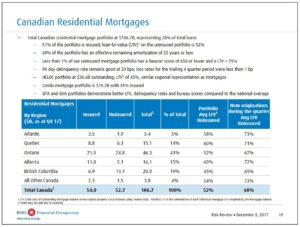 BMO, one of Canada’s largest Schedule I banks, has the lowest relative exposure to the residential mortgage market amongst the Big 5 in Canada. This will help mitigate some of risks in the event there is a correction in the Canadian real estate market.

It would not, however, be immune to an economic downturn because of its exposure in the domestic commercial lending market; it has a relatively large book of commercial loans under $25 million.

BMO has the largest amount of assets under management among the Canadian banks and the largest proportion of its revenue coming from wealth-management fees in its peer group; Canadian readers may be familiar with BMO’s ETFs. BMO, however, is competing against a formidable competitor in this space in the form of BlackRock which holds a ~50% market share of the Canadian ETF market. In addition, Vanguard entered the Canadian market in December 2011. While Vanguard currently has 33 ETFs with only $12.5B in assets under management, it is a formidable competitor that will undoubtedly grow its Canadian market share in due course.

BMO’s outlook for 2018 can be accessed on page 7 of 112 in Management’s Discussion and Analysis in the 2017 Annual Report.

BMO, Canada’s 4th largest bank from a market cap perspective, derives ~70% of its revenue from Canada where barriers to entry in the Canadian banking system are extremely high. Mergers amongst the major Canadian FIs are unlikely to happen anytime in the near future. Readers may recall that in 1998 two large merger proposals were denied: RY with BMO and The Toronto-Dominion Bank (TSX: TD) with The Canadian Imperial Bank of Commerce (TSX:CM). Furthermore, existing regulations prevent foreign competition; non-Canadian residents may not own more than 25% of the shares of a bank unless approved by the government.

The remaining ~25% of BMO’s revenue is derived from its US operations. It is interesting to note that BMO established a US presence in the US Midwest in 1984 when it acquired Harris Bank but it never rebranded its US operations with the BMO name until 2011 after acquiring Milwaukee based Marshall & Isley Corporation (M&I Bank) in December 2010. The lag in rebranding the US operations is in stark contrast to that of The Toronto-Dominion Bank (NYSE: TD) which wasted little time to rename its US operations.

If you compare the progress BMO has made in the US with that of TD which entered the US market in a meaningful way only in the mid 2000s, you realize that the strategic vision may have been less than 20/20 at the top of the BMO house.

The Canadian banks will likely encounter some challenges domestically in 2018 as the Canadian consumer is stretched thin and the housing market in some major urban centres will likely experience some softening. Had BMO done anything of significance with the US segment of the bank between 1984 and 2010 (it has delivered 13% compound annual income growth over the last 2 years and strong operating leverage) the US operations would likely be generating in excess of the current 25% of total bank earnings.

In the December 5th conference call, BMO’s CEO indicated the bank will continue to accelerate growth in its US segment. The plan is to build on the strength of its commercial banking operations and to accelerate growth and profitability in its personal banking, personal wealth, and asset management business lines.

Given the plans to accelerate growth in the US, I suspect BMO is on the hunt for acquisitions to complement its organic growth; becoming a meaningful player in the highly fragmented US market through organic growth is extremely difficult and time consuming.

Acquisition opportunities for the right price and of the size of M&I Bank do not often arise. As such, “bolt on” acquisitions in the regions in which BMO already has operations is likely the best course of action as opposed to making a major acquisition. The challenge BMO faces is that acquisitions in the US are currently very expensive as The Canadian Imperial Bank of Commerce (NYSE: CM) learned from its acquisition of Chicago-based PrivateBancorp in June 2017 for ~CDN$5B.

As noted in my other articles in this series about the major Canadian FIs, considerable focus has been placed on the Canadian banks’ exposure to the Canadian consumer and the Canadian housing market.

The comments I made in my previous articles within this series regarding the outlook for Canadian housing market in 2018 apply to BMO; the impact of the latest mortgage rule changes in Canada, NAFTA renegotiations, and geopolitical uncertainty could cause some disruption in 2018.

While a slowdown in real estate lending in Canada in 2018 is highly likely, BMO’s senior management is keenly aware of the risks and is managing the business accordingly.

On the December 5th conference call, management reiterated its commitment to the medium-term objectives for EPS growth of 7% - 10%, operating leverage of >2%, capital in excess of regulatory expectations, and >15% ROE. Moderate interest rate increases in the US and Canada are forecast which would positively impact net interest margin and contribute to the achievement of these objectives.

BMO is the longest-running dividend-paying company in Canada.

Dividends declared in fiscal 2017 totalled $3.56/share and represented 43.6% of reported net income and 42.6% of adjusted net income available to common shareholders on a last 12 months basis.

The target dividend payout range (common share dividends as a % of net income available to shareholders, less preferred share dividends) based on earnings over the last twelve months is 40% to 50%.

BMO’s dividend history reflected on its website certainly has its shortcomings in that easily accessible information regarding historical dividends only dates back to 2012. Although historical dividend information during the Financial Crisis is not readily accessible on the bank’s website, I can assure you that BMO did the same thing with its quarterly dividend as its Canadian counterparts...the dividend was frozen.

If you look at the recently declared dividends on BMO’s website you may notice that the $0.93 dividend declared December 5, 2017 reflects a record date and a payment date in February 2017. Rest assured the year should be 2018.

In the grand scheme of things the above shortcoming and error are insignificant when compared to the fact that BMO announced a $0.03/share increase in its quarterly dividend to $0.93/share (payable February 27, 2018). This marks the second time BMO has increased its dividend in the past 12 months.

If you look at stock screeners you will see that BMO’s dividend yield is reflected as being 3.75% on the basis of the closing stock price of $99.14 on December 5, 2017. If history is any indication of what investors can expect with respect to BMO’s dividend over the next 12 months, we will likely see another $0.93 dividend in May 2018 and dividend payments of ~$0.95 for August and November 2018. If my assumptions are correct, investors can expect to receive at least $3.76 in dividends in 2018 which represents a forward dividend yield of ~3.80% on the basis of a $99.14 stock price.

The current mean FY2018 adjusted EPS estimate from various brokers is $8.40. This figure, however, is skewed to the upside by one analyst’s estimate; I suspect this outlying estimate is currently under review. 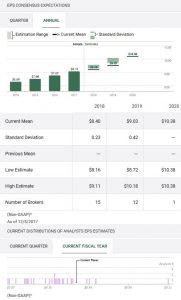 The disparity in earnings estimates is quite pronounced but I will stick with the mean estimate of $8.40 for my current purpose of estimating 2018’s adjusted PE. With a current stock price of $99.14, we get a forward adjusted PE of ~11.8.  The following are the mean PE estimates for BMO’s peer group:

I view BMO’s forward adjusted PE ratio as reasonable for a franchise of BMO’s quality and when compared to its peer group.

The probability of a housing correction in major Canadian markets in 2018 is highly likely. As such, investors should not be surprised to see a pullback in BMO’s stock price. I do not, however, envision a correction to the extent PAA suggests.

BMO is well diversified and very closely monitors its risk exposure. In addition, the bank’s senior management is keenly aware of the risks associated with the Canadian economy and Canadian households.

Readers should take into consideration that the Canadian banking system is a “government blessed oligopoly” in which the largest 5 participants generate billions in profitability every year (with the very rare exception).

As noted in my previous articles within this series, betting against the Canadian banks is a tough way to make money. In my opinion, I recommend investors think long-term.  A buy, hold, and reinvest the dividends strategy can result in a significant increase in wealth over time and with considerably less stress than going short.

By Charles|December 8th, 2017|Equity Investing|Comments Off on Don’t Short the Canadian Banks – Bank of Montreal