Recently PAA Research (“PAA”) based in Atlanta, Georgia released a report suggesting investors are being presented with an opportunity to profit by shorting (please listen to video) the Canadian banks.

Prior to reading this analysis on The Toronto-Dominion Bank (TSX: TD), you are encouraged to read my recent analysis on The Royal Bank of Canada (TSX: RY) in which I present my take on why shorting the Canadian banks stocks is not a recommended course of action. 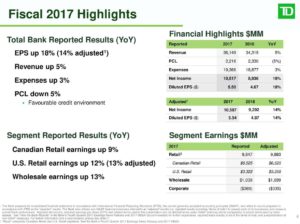 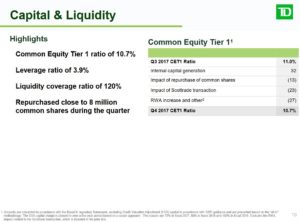 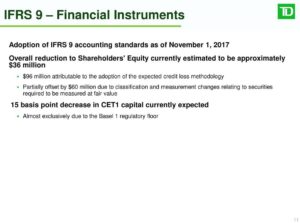 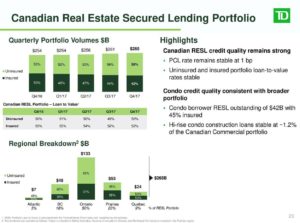 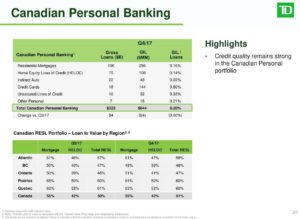 As noted in my other articles in this series about the major Canadian FIs, considerable focus has been placed on the Canadian banks’ exposure to the Canadian consumer and the Canadian housing market.

It is highly probable that real estate sales will weaken in 2018. Recently there has been a surge in home sales in major Canadian markets. This is likely the result of some households speeding up their home buying decision before Canada’s top banking regulator’s (The Office of the Superintendent of Financial Institutions) new uninsured mortgages guidelines take effect January 1, 2018.

While a likely slowdown in real estate lending in Canada in 2018 is a strong possibility, readers should note that TD:

The impact of the latest mortgage rule changes in Canada, NAFTA renegotiations, and geopolitical uncertainty could cause some disruption in 2018. Senior management, however, indicated on its November 30, 2017 analyst call that strong momentum from 2017 is expected to carry over to 2018 on the basis that:

Unless a major disruption occurs, total bank adjusted EPS growth for 2018 will likely fall within the 7% -10% medium-term target range.

TD’s dividend history can be found here. As with the other major Canadian financial institutions, TD froze its quarterly dividend during the Financial Crisis.

The next quarterly $0.60 dividend will be payable toward the end of January 2018 marking the 3 rd consecutive dividend payment at this level. Unlike some of its Canadian counterparts which have been increasing their dividend a couple of times per year, TD has opted to increase its dividend less frequently but at a slightly higher level.

TD’s dividend payout ratio on a reported and an adjusted basis (current, quarterly for the past 2 fiscal years, and annual for the past 3 fiscal years) can be found on page 5 of 90 of the October 31, 2017 Supplementary Financial Information document. Both ratios for FY2017 are sub 44% which is a shade superior to the mid 40s level reported by its peers. 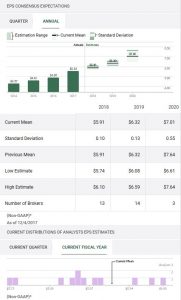 I view the projected adjusted EPS estimates reflected above as reasonable for a franchise of TD’s quality.

It would be naive to think the probability of a housing correction in major Canadian markets in 2018 will not occur. If we do get a correction we will undoubtedly see a pullback in TD’s stock price. I do not, however, envision a correction to the extent PAA suggests.

The bank is well diversified and very closely monitors its risk exposure. The bank’s senior management is not operating with heads buried in the sand. They have a far better pulse on their business than me and the vast majority of the readers of this article.

As noted in my previous articles within this series, betting against the Canadian banks is a tough way to make money. In my opinion, I recommend investors think long-term.  A buy, hold, and reinvest the dividends strategy can result in a significant increase in wealth over time and with considerably less stress than going short.