Recently PAA Research (“PAA”) based in Atlanta, Georgia released a report suggesting investors are being presented with an opportunity to  profit by shorting (please listen to video) the Canadian banks and in particular, The Royal Bank of Canada (TSX: RY) and the Canadian Imperial Bank of Commerce (TSX: CM).

The founder of PAA lays out his case for shorting the Canadian banks within the first 3 minutes of the video. He then elaborates on his rationale for his "short" call in the remainder of the ~11 minute video.

While considerable analysis may have been undertaken to arrive to the conclusion that RY and CM could see a 30% - 40% drop in their stocks prices (50% is another estimate which has been postulated around the 9 minute mark of the interview), I am of the opinion the probability of such a correction is remote.

I agree that a retracement in the stock price of these two banks is not out of the realm of possibility. If, however, a retracement of the magnitude postulated by PAA were to occur we would likely be experiencing another major market meltdown much like the Financial Crisis.

I do not dispute that we may see a pull back in Canadian bank stock valuations in 2018 from current levels. The pullback, however, is unlikely to come from massive write downs due to a dramatic deterioration in the quality of the overall loan portfolio. If any pullback is to occur it will most likely come from a weakening in loan growth.

PAA has raised concern about the Canadian banks employing 23 – 26 times leverage. It goes on to say that US banks were trading at ~30 times leverage just prior to the Financial Crisis.

In addition, its analysis indicates the major Canadian financial institutions are “grossly understating their risk weighted assets because they are using grossly optimistic probabilities of default scenarios”. PAA suggests that the adoption of IFRS 9 on January 1, 2018 it going to result in the need for the provision of higher credit losses. The argument put forth is that banks currently recognize losses when they occur. Under IFRS 9, however, banks will need to report losses on the basis of a credit loss model and this will result in billions of dollars in losses from the Canadian financial institutions as a whole.

Interestingly, RY’s CFO indicated in the November 29, 2017 conference call that:

“Based on current estimates, the transition to the new accounting standard is not expected to have a significant impact on our capital ratios since we already have a sizable $1.2B capital deduction for our shortfall of allowance to expected loss.

This shortfall is expected to absorb our estimated $600 million reduction in retained earnings for IFRS 9 transition. We would still have room under the shortfall to absorb future PCL impacts from a capital perspective.”

If a borrower defaults on their obligation to a Canadian bank, they do not get a “clean start” like in the US. In the US you can be declared bankrupt and shortly thereafter you can apply for credit. In Canada, when you are declared bankrupt a judge can put a lien on future income.

In the US, a resident in Oregon, for example, can be declared bankrupt. If this individual owns a multi-million dollar home in Florida, the bankruptcy judge cannot force the sale of this out of state home for the purpose of satisfying a borrower’s obligations in Oregon. In Canada, assets held in any province can be seized to settle a borrower’s obligations. Only the proceeds of life insurance policies and Registered Retirement Savings Plans are off limits in bankruptcy proceedings.

PAA raises issue with the “red hot” real estate market in various regions within Canada. Some pockets of the real estate market have experienced a recent uptick in activity and in the average sale price but this could be due to some home buyers accelerating their purchase plans before more stringent uninsured mortgage rules come into effect in early 2018.

I am in total agreement that property values in certain major metropolitan areas within Canada are overvalued. Some regions and segments of the Canadian real estate market, however, have already begun to experience a slowdown in activity and a decline in average sale price from earlier in 2017. It is now not uncommon for buyers to present offers below asking price and for properties to remain on the market longer. In my opinion, real estate values in over heated areas will experience a correction of some magnitude in 2018 but I do not envision a correction similar to the early 1990s.

Even if there is a correction in real estate values in 2018, the major Canadian financial institutions are somewhat insulated. In Canada, if a borrower fails to meet minimum equity requirements, RY and its peers require that mortgages be insured by Canada Mortgage and Housing Corporation. The banks are, in essence, ultimately off-loading some of their risk to the Canadian taxpayer.

In the event a borrower meets the requirements for an uninsured mortgage, the collateral consists of the property on which the mortgage is registered plus other assets owned by the borrower. Note that this does not mean the lender registers a specific charge on other assets. It merely means the lender can pursue legal action against the borrower to recover any shortfall that may arise in the event there is a shortfall between the sale proceeds of the secured property and the value of the outstanding mortgage. 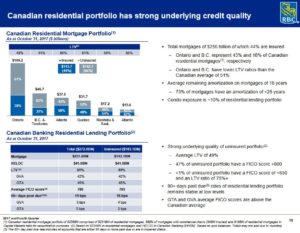 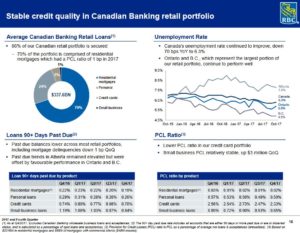 In the real estate book of business, real estate values would need to drop ~50% before the values of the properties securing the uninsured portfolio are comparable to the outstanding mortgages. In addition, note that the quality of the borrowers are, for the most part, reasonably strong as evidenced by the FICO scores and the low number of 90 day past due mortgages. On the retail loan front, delinquencies also appear to be well under control.

The Canadian banks have never been aggressive to the same extent as US banks; the Financial Crisis served as reinforcement for the need to continue with lending standards that err on the side of caution. Even though the banks already have conservative credit standards, The Office of the Superintendent of Financial Institutions (OSFI) just recently introduced more stringent borrowing conditions with respect to uninsured mortgages.

With respect to the financial leverage level referenced by PAA, the Canadian banks manage their loan and mortgage portfolios very differently from US banks. The US banks typically collateralize their mortgages and unload them from their books. The Canadian banks, however, have access to inexpensive funding from their huge deposit base and keep their loans/mortgages on their books. This explains why the leverage ratio is higher relative to US banks.

RY has multiple lines of business (Domestic Banking, Wealth, Insurance, Investment Banking, etc.) from which it generates income. This diverse stream of income enables RY’s results to be relatively stable with wild swings in annual results being very infrequent. 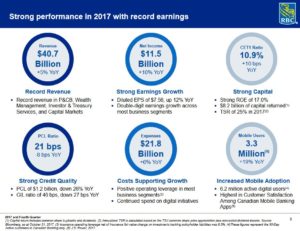 RY's outlook for FY2018 is reflected below. 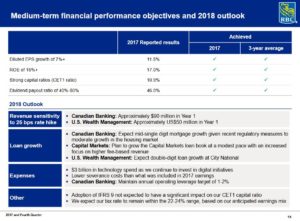 The following tailwinds are expected to benefit RY in FY2018.

RY does, however, face some headwinds.

The Canadian economy is expected to experience a slowdown in growth in 2018.

Although RY consistently grows its top line, with the odd exception, the rate of growth does fluctuate. In my opinion, RY will be challenged to replicate or exceed FY2017’s growth rate. If it fails to meet FY2017’s growth rate, RY’s stock price could experience a slight pullback. I do not, however, envision the dramatic pullback in RY’s stock price postulated by PAA.

Investors have clearly been rewarded over the years. The only recent blemish in RY’s dividend growth track record was the dividend freeze during the Financial Crisis.

The current dividend yield of ~3.6% reported on various websites is on the basis of RY maintaining its quarterly $0.91 dividend for the next 4 quarters. RY, however, typically increases its quarterly dividend semi-annually.

This forward dividend yield is somewhat lower than the 4%+ yields evidenced in FY2015 and FY2016. This is attributed to the relatively recent rapid rise in RY’s stock price; RY’s low stock price over the past 52 week period is just shy of $87.

I am not a yield chaser so while the current dividend yield is lower than historical levels, it is acceptable for my purposes.

The current ~48% dividend payout ratio is in line with results over the past few years.

The current mean FY2018 adjusted EPS estimate from various brokers is $8.05 with a very significant disparity in estimates.

While there is the potential to make money by betting against the major Canadian banks I view this strategy as fraught with risk. You will likely experience far greater success and with a lower level of stress if you buy, hold, and reinvest your dividends over the long-term. Based on personal experience you can make a lot of money with this relatively simple strategy.

Disclosure: I am long RY and CM.