This post is a follow-up to my February 10, 2017 Brookfield Asset Management (NYSE: BAM) post wherein I expressed an opinion that BAM represents a solid investment for investors with a focus on long-term wealth creation.

We initially acquired shares in TSX: BAM.a in February 2009, and therefore, have first-hand experience of BAM’s success. I also provide the following two graphs from BAM’s recently released Management Information Circular which attests to BAM’s impressive returns over the recent years. 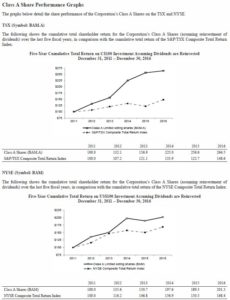 I recognize that while the past does not predict the future, it certainly lends some comfort knowing that BAM has a proven successful track record.

Over the last ~8-9 years, BAM has gradually transitioned from actually owning assets directly for its own portfolio to becoming a fee generating advisor. As part of this transition, the following divisions were taken public beginning in 2008.

Collectively, the 5 public entities have a market value in excess of $56B.

BAM’s stakes in the four entities feed BAM with a perpetual and growing stream of cash. It generates fixed fees plus a 1.25% annual management fee based on the value of its listed partnerships and performance fees of 15% to 25% based on the level of the dividends. Add in dozens of private funds in which BAM is usually a 20% investor and BAM is generating ~$1.1B annually in fee revenues. This is a 31% YoY increase and a 160+% gain from 2012; BAM expects it will generate $2.4B in annual fees by 2021.

Readers are encouraged to review BAM’s results reported in its May 11, 2017 Earnings Release,  the Q1 2017 Supplemental Information document, and the Q1 2017 May 11, 2017 Conference Call Transcript. 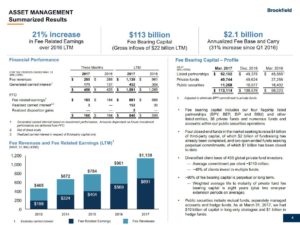 In Q1, BAM successfully closed a number of transactions totaling ~ $10B of investments and it advanced the $1.4B acquisition of TerraForm Companies (NASDAQ: TERP) for its renewable power business which it hopes to close later in 2017. Details of the TerraForm investment can be found in this March 7, 2017 Press Release. 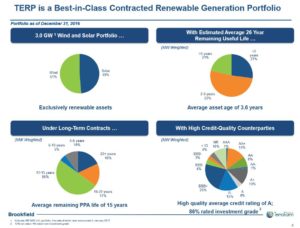 BAM has owned Trisura Guarantee Insurance Company, a property and casualty insurance business, for ~10 years. This entity is in the business of writing specialty insurance policies and it has consistently and profitably grown its operations over the years. It also specializes in providing surety bonding for smaller contractors. The business is regulated, stands on its own, has been run very conservatively, and it reinsures most of the exposures and only assumes underwriting risk in a measured way.

BAM deemed this business to no longer be strategic given the focus on its asset management operations. Since the sale of Trisura was viewed as being too disruptive and unlikely to generate an offer that would fairly value the business, BAM has decided to combine this business with the rest of its small specialty insurance operations and will spin them off from BAM under the brand name Trisura Group.

Details of the spin-off can be found here.

On May 19th BAM announced it had received approval of the renewal of its Normal Course Issuer Bid in which it can purchase up to 82,965,721 Class A Limited Voting Shares between May 24, 2017 - May 23, 2018 or an earlier date should BAM complete its purchases; this represents 10% of the public float of BAM's outstanding Class A Shares.

As a long-term BAM investor, I am fully in favor in the reduction in the number of shares outstanding. I suspect, however, that BAM is unlikely to repurchase in excess of $3.1B of Class A Limited Voting Shares (82,965,721 x $37.50) over the upcoming 12 month period!

Many readers prefer to invest in securities having a far better yield. In this case, an investment in one of BAM’s 4 divisions referenced in the Introduction section of this post may be more attractive than an investment in BAM.

While there is absolutely nothing wrong with a direct investment in the divisions, I prefer to invest at the “top of the house” for the following reasons: 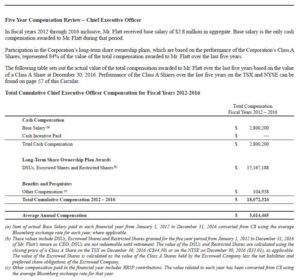 While BAM is not inexpensive by any stretch of the imagination, it is not currently unreasonably priced when you look at BAM’s long-term growth potential.

BAM is certainly not an easy to understand entity and this post provides no justice in trying to explain the shrewdness and sophistication of BAM’s long-term strategy and overall operations.

If you happen to be a reader who has come away disappointed that I did not go into any “technical” analysis, please accept my apologies. I, however, view technical analysis as something more relevant to short-term investors. I happen to be focused on investing for the next generation. This time frame, coincidentally, is similar to that of BAM as evidenced by Bruce Flatt’s comment on the eve of the Financial Crisis in 2007:

“Forget the gloom. Pipelines, wireless towers, power generation, ports and toll roads--the backbone of the global economy--would soon become the holy grail investment product for trillions of dollars stagnating in pension funds and savings. "David [Rosenberg's] presentation is probably about the next six months," Flatt told the doomsday-obsessed audience. "Mine is more relevant to the next 25 to 60 years." 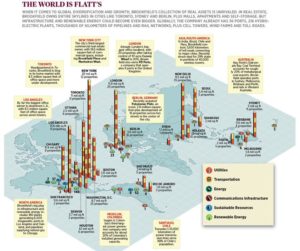 The following are factors I have also taken into consideration in my ultimate decision to periodically add to our BAM holdings:

Finally, it is entirely possible the following observations made in an article in the May 16, 2017 issue of Forbes magazine may not resonate with you. They do, however, resonate with me as I have grown tired of stories about senior executives leading an extravagant lifestyle at the expense of company shareholders.

“Bruce Flatt is an accountant from Manitoba who lives in a quiet Toronto neighborhood and often commutes by subway.” Note: I have personally seen Mr. Flatt commuting to work on the Toronto subway (TTC).

“Modest home? He lives in a two-story brick townhouse barely set back from the sidewalk. Humble office? A drab gray cubicle, positioned against a window looking onto a courtyard of an office complex that Brookfield owns. Contrarian outlook? The only piece of art visible from Flatt's desk is a framed cartoon depicting a herd of white sheep moving toward a cliff as a single black sheep heads in the opposite direction.”

I would like to think I am not the only “average small time investor” who wishes more CEOs would lead less extravagant lifestyles that are ultimately financed by shareholders of the companies they oversee!

Note: I appreciate the time you took to read this article and hope you got something out of it. As always, please leave any feedback and questions you may have in the “Contact Me Here” section to the right.

Disclosure: At the time of writing this post I am long a few hundred shares of BAM.a, BPY.un, BBU.un. These holdings represent ~0.5% of our overall holdings and not just the FFJ Portfolio.