Verizon Communications Inc. – Reinventing Itself to Provide Services as Opposed to Infrastructure 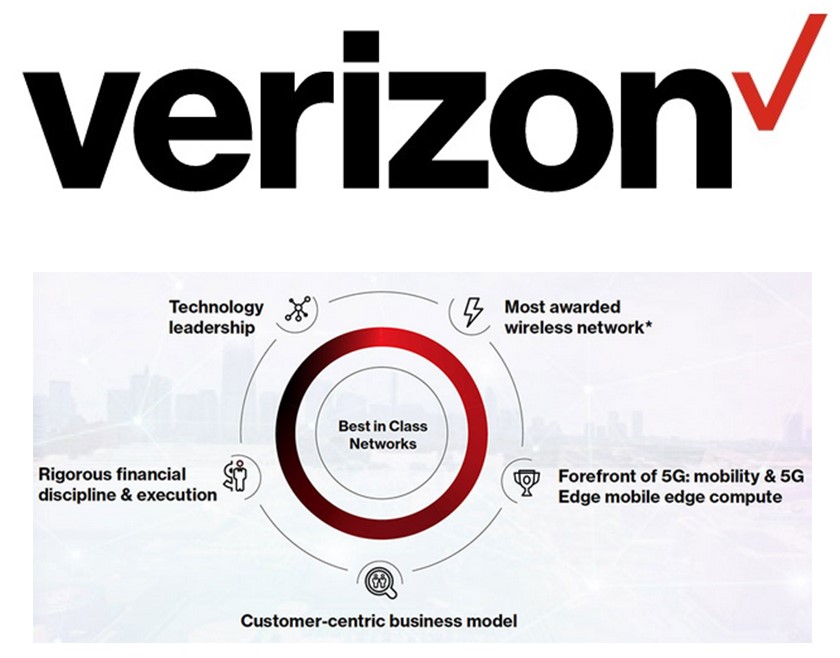 Verizon Communications Inc. (VZ) is a holding company that, acting through its subsidiaries, is one of the world’s leading providers of communications, information and entertainment products and services to consumers, businesses and government entities. With a presence globally, VZ offers voice, data and video services and solutions on its networks that are designed to meet customers’ demand for mobility, reliable network connectivity, security and control.

Berkshire Hathaway's Form 13-F, in which it discloses investments in publicly traded companies, was released February 16, 2021. We see from this recent filing that in the mid 2020 it acquired in excess of 146.7 million VZ shares. I view this as a vote of confidence for the reinvention of VZ to being a provider of services as opposed to an infrastructure play.

I have held a VZ position since mid-August 2016 with shares being held in one of the 'Core' accounts within the FFJ Portfolio.

Investors looking at an investment in Verizon Communications Inc. (VZ) by merely at its historical performance would be wise to consider the extent to which the company is being reinvented to provide services as opposed to infrastructure.

On August 15, 2016 I initiated a 500 share position in VZ in one of the 'Core' accounts within the FFJ Portfolio.  As I look back on this investment I see that I could have deployed funds invested in VZ to generate a far superior return. When I initiated a VZ position, however, my primary consideration to invest in a reasonably safe company which would generate a reliable stream of dividend income; I had retired less than 3 months prior to making this investment.

It turns out I have not required my VZ dividend income and now I find myself holding 580 shares by merely having automatically reinvested the quarterly dividends after the 15% withholding tax was deducted; shares are held in a taxable account.

Now I find out that Berkshire Hathaway (BRK-a and BRK-b) acquired in excess of 146.7 million shares a couple of quarters ago; BRK has received special dispension to report changes to the publicly listed companies in which it has invested so it can make changes to its portfolio before other investors can copy its moves.

BRK certainly does not need to acquire VZ shares to generate additional income. It has a difficult enough time deploying the stockpile of cash it has; we see on page 3 of 55 in its Q3 2020 financial statements that it held ~$160B in cash and cash equivalents, short-term investments in U.S. Treasury Bills, and investments in fixed maturity securities. Clearly, Buffett and Munger see something in VZ that goes well beyond the dividend income which can be generated by investing in this company.

Let's have a quick look at why investors may want to look at VZ differently from the VZ of a few years ago.

The company consists of 3 operating groups (Consumer, Business, and Media). It is now primarily a wireless business (70% of revenue and nearly all operating income) and is the largest U.S. wireless carrier. It serves in excess of 90 million postpaid and ~4 million prepaid phone customers and connects another ~24 million data devices, like tablets, via its nationwide network. Fixed-line telecom operations include local networks (12% of revenue) in the Northeastern US region which reach ~25 million homes and businesses, and nationwide enterprise services (10%).

This is an extremely capital intensive business as evidenced from VZ having made very significant investments in recent years in fiber network construction. This has supported VZ's wireless business and expanded the traditional fixed-line capabilities.

The smallest of VZ's groups (Verizon Media Group) intersects media, advertising, and technology and was formed with the acquisitions of AOL and Yahoo.

What is especially critical for VZ's future is the extent to which VZ will be awarded valuable airwave licenses that can be used to build out faster and more powerful 5G networks. If you are unfamiliar with 5G and how it will impact the world in which we live, I highly encourage you to check out the information available on VZ's website (see here).

The Federal Communications Commission (FCC), which regulates interstate and international communications by radio, television, wire, satellite and cable in all 50 states, the District of Columbia and U.S. territories, auctioned off the licenses with bidders having included wireless companies, cable companies, and a few wild cards. Earlier this year, the FCC announced that bidders spent ~$81B on the licenses which is considerably greater than the $20 -$30B predicted the summer of 2020.

Winners will be announced soon but I envision VZ will be awarded its fair share of airwave licenses which is great because it could then build a network that is faster than the current 4G networks and it will not be required to build towers on every block. A high level overview on this auction and the impact being awarded licenses could have on successful bidders can be found here.

John Chambers, former CEO of Cisco and currently CEO and Founder of JC2 Ventures was recently interviewed. In this interview he shared his outlook on the tech industry and explained that VZ is a company which is reinventing itself to provide services as opposed to infrastructure.

The Condensed Consolidated Statements of Income reflects a ~21.7% Operating Income margin. This level is consistent with prior year levels.

The Condensed Consolidated Statements of Cash Flows reaffirms that this is an extremely capital intensive business. We see Net cash provided by operating activities of ~$41.77B which is ~$6B higher than in the prior fiscal year and Capital Expenditures (including capitalized software) of ~$18.2B which is marginally higher than FY2019. The difference between these two values gives us Free Cash Flow of ~$23.57B. 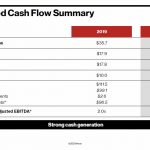 Looking at the Condensed Consolidated Balance Sheets as at December 31, 2020 we see VZ had in excess of $22B in cash and cash equivalents versus under $3B December 31, 2019. The magnitude of cash on the Balance Sheet and the FY2020 Cash Flows suggests VZ was preparing itself to be a significant recent bidder for 5G licenses!

FY2021 guidance calls for capital spending to be ~$17.5B - $18.5B, including the further expansion of 5G Ultra Wideband in new and existing markets, the densification of the wireless network to manage future traffic demands, and the continued deployment of the company's fiber infrastructure. This is clearly not a business to be in unless you are profitable, generate strong free cash flow, and have the ability to tap the markets for inexpensive financing; the FY2020 10-K has not yet been released at the time this article is being composed but looking at the first page of the 8-K we see various Notes, their interest rates, and their maturity dates. Page 65 of 96 in the FY2019 Annual Report/10-K reflects other outstanding long-term debt obligations as of December 31, 2019 and 2018 at less attractive interest rates but the amount owing on these higher rate obligations is relatively insignificant.

VZ's debt ratings from Moody's, SPGI, and Fitch and the schedule of outstanding debt can be found here. Moody's and SPGI rate VZ's long-term unsecured debt in the top tier of the lower medium grade category. Fitch, however, rates VZ one notch higher at the lowest tier of the upper medium grade.

VZ's ratings are investment grade and are satisfactory for my risk tolerance.

Looking at VZ's dividend history we see that dividend growth in the last few years has just been in excess of 2%. VZ has two more quarters in which it shall distribute a $0.6275/share dividend and I envision that in September it will declare a dividend payable the beginning of November that will likely be ~$0.64/share/quarter. On this basis, investors can expect 2 quarterly $0.6275 dividends and 2 at $0.64 giving us a ~$2.535 dividend/share over the next 4 quarterly dividend distributions. On the basis of the current ~$57 share price this translates into a ~4.45% dividend yield. Since I hold VZ shares in a taxable account I incur a 15% withholding tax so I shall only receive ~$2.15 for a dividend yield of ~3.77% on the basis of the current share price. 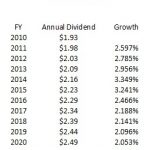 In my opinion, VZ appears to be reasonably valued. This, however, is on the basis that VZ will be awarded a reasonable number of 5G licenses by the FCC. I have no reason to think this will not be the case.

I initially invested in VZ for its dividend income potential and not for its growth potential. It now appears that we may witness a bit more growth from VZ than in recent years. While we wait to see if this growth materializes, we get a reasonable dividend yield in exchange for our patience.

The fact BRK made such a significant investment in VZ last year at share prices in excess of those at which I have acquired most of my shares is comforting in that the team at BRK have clearly demonstrated over the years that they have a knack of investing in companies which possess the ability to aptly reward investors. Having said this, I am satisfied with my current VZ exposure and have no immediate plans to acquire additional shares.

Disclosure: I am long VZ.

By Charles Fournier|February 18th, 2021|Equity Investing|Comments Off on Verizon Communications Inc. – Reinventing Itself to Provide Services as Opposed to Infrastructure