United Technologies Corporation (NYSE: UTX) released its Q4 2016 and FY2016 results and affirmed its 2017 Outlook on January 25, 2017. In addition, UTX’s EVP and CFO presented at the Cowen and Company 38th Annual Aerospace/Defense & Industrials Conference on February 9, 2017. I will use information from these two UTX Events and Presentations for the purpose of preparing this post.

I have owned UTX shares (not in the FFJ Portfolio) since April 18, 2008 at an initial purchase price of $70.50; all subsequently received dividends have been automatically reinvested.

It is only fair that I should mention up front that, as a Canadian citizen, I used Canadian dollars to purchase UTX for my Registered Retirement Savings Plan (RRSP) and when I made my purchase I had to lay out CDN $1.031 for USD $1.00. Well, today it takes roughly CDN $1.3084 for USD $1.00. Even if UTX’s stock price had stayed flat for roughly 9 years, the change in the FX rate alone would have generated an acceptable return.

I mention the above because I am fully cognizant that the vast majority of the readers of this post have USD as their base currency so the CDN/USD exchange rate is totally irrelevant to them. The comments expressed in this post are, therefore, on the basis that I have not benefited from a dramatic weakening of the Canadian dollar subsequent to the date of purchase.

Another benefit I would like the reader to take into consideration is that all dividend income has been sheltered from any tax. This may not be pertinent in your case.

Q4 and FY2016 Results and Reduction in O/S Shares

Highlights of UTX’s results can be found in its January 25, 2017 Earnings release.

I want to highlight UTX’s FCF for the past couple of fiscal years as well as the magnitude to which UTX has retired its shares. You will see that in the 2012 – 2016 timeframe, UTX has retired just under $15B of outstanding shares. While $6B from the $9B cash sale of Sikorsky Aircraft to Lockheed Martin Corp. (NYSE: LMT) was used to repurchase UTX shares on the open market, FCF and a slight increase in long-term debt also assisted in this regard.

As noted in the Introduction section of this post, UTX affirmed its outlook for FY2017 on January 25, 2017 and again on February 9, 2017. The following is a recap of UTX’s outlook for the current fiscal year.

UTX has a history of leaving its dividend in place for 5 consecutive quarters and the $0.66 dividend payable March 10, 2017 will only be the fourth at this level. If history is any indication, I would not expect UTX to announce a dividend increase until such time as the September dividend payment is declared which should be some time in the summer of 2017.

I suspect management is more inclined to repurchase its shares than it is to significantly increase its dividend. I suggest readers temper their expectations for a dividend increase in excess of $0.02/quarter later this year.

As I compose this, UTX’s shares are trading around $112.

If I use the current price of $112 and an adjusted EPS range of $6.30 - $6.55 I get a PE range of 17.01 - 17.78. When I compare this with UTX’s Valuation History obtained from Morningstar’s site, I perceive UTX to be currently slightly overpriced. I say this because I think the 2016 PE ratio of 23.7 reported by Morningstar was an aberration. A PE ratio in the 15 – 16 range is probably more representative of what one should expect for UTX and a PE ratio sub-15 is a time to deploy more money toward UTX purchases.

UTX’s current dividend yield is roughly 2.36% and a stock price drop to the $100 level would only result in a 2.64% dividend yield. If you are a dividend yield hungry investor, UTX is most likely not going to be your first investment choice.

I know UTX has operations in various countries but I have been unable to ascertain the extent to which the $7B in cash held on the balance sheet as at the December 31, 2016 fiscal year end is held outside the US. Should the amount be such that UTX would be able to repatriate a portion of this amount to the US under the “Corporate Tax Holiday”, I suspect some of this repatriated money would also be applied toward share repurchases versus an increase in the quarterly dividend.

Looking at UTX’s Call Option chain, I selected an August 18, 2017 expiry. You could write a covered call (meaning you own sufficient UTX shares to back the option contracts you are writing) with a $120 strike price and receive about $1.73 share. If you’re wondering why I chose a $120 strike price, it is because I sincerely do not think that UTX will rise to this level by the August 2017 expiry date which would mean you get to keep your shares and the entire premium you received for writing the contracts (minus the commission of course).

If, UTX gets close to $120 as expiry approaches and you don’t want to get called away, you could close your position and write a new covered call contract. You would probably write a new covered call option that would generate sufficient premium to cover whatever money you need to close the first set of contracts and give you excess cash for other purposes (including just hanging on to the cash if it gives you peace of mind).

Clearly there is a multitude of option strategies you could adopt including vertical spreads but I am not the right person to be dispensing such strategies. Furthermore, I am not licensed to. 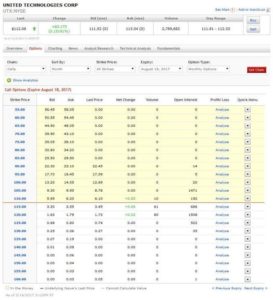 UTX has been extremely kind to me. As noted in the Introduction of this post, some other investors will have an entirely different opinion. Their experience with UTX is why I like to dip my toe when opening a new position and to gradually increase my exposure over time.

Naturally, if markets tank and my underlying reason for investing in a company has not changed, I will load up on more shares. Similarly, if a stock’s price is going parabolic because of investor euphoria, I will back off.

I am certain every reader out there can think of a few companies with PE ratios in the stratosphere or with no PE ratios because there is no “E”. However, millions of shares or in some cases tens of millions, will trade daily.

UTX is pretty close to the opposite end of this spectrum. Be careful, however, because you can still overpay for a company such as UTX. In my opinion, now is probably a time where you might be overpaying.