Is it just me or can investment ideas be staring at you in the face daily for prolonged periods of time but you don’t give them a second thought because you are too busy running around doing things that are “important”? Let me explain.

Today’s post is about Cisco Systems, Inc (NASDAQ: CSCO), the tiny $166+B market cap behemoth. CSCO first crossed my radar screen in 2000 during the height of the tech craze. As you can imagine, it immediately fell off my radar when I saw the astronomical valuation levels. I did have co-workers who bought when CSCO was in the $60s and they subsequently lost a ton of money (try 6 figures) when they sold in 2002 after they lost hope for the “so dearly prayed for” turnaround.

Fast-forward roughly 10 years later when I finally decide to take a closer look at CSCO. Every day I would fire up my laptop and I would have to use CSCO’s secure login service to remotely access confidential and sensitive information. I never had an issue with the software and the fact CSCO’s logo popped up on my screen daily would have probably been a clue to look into CSCO again. ‘Ya think’?

The company was STILL not paying a dividend but I looked at the numbers and felt that at some point in the future, management would decide to reward investors and to reduce the drag CSCO’s huge cash position had on its results. I thus proceeded to dip my toe into CSCO and bought a few shares in November 2010.

CSCO then initiated a quarterly dividend in March 2011. Okay, it was $0.06/share but it was something! This was followed up in February 2012 with CSCO announcing that it was increasing its dividend to $0.08/share commencing with the April 25, 2012 payment date.

In June 2012 when CSCO announced that it was going to pay another $0.08/share dividend in late July, I decided to pull the trigger and I bought another 550 CSCO shares.

Clearly, management appreciated my loyalty, trust, and confidence in them. How did they express this appreciation? They increased the dividend from $0.08/share to $0.14/share effective with the October dividend payment.

Here is a schedule of our CSCO purchases:

As of the date of this post, we currently own 777 CSCO shares in our FFJ portfolio because we have been automatically reinvesting our quarterly dividends. As I compose this, the after-hours price is in the $32.30 range and our total CSCO investment is $25,097.

Q2 2017 Financial Results and Outlook for Remainder of Fiscal 2017

Highlights of CSCO’s results can be found in its February 15, 2017 Earnings release which includes a reconciliation of GAAP and Non-GAAP information.

Results were less than stellar with Q2 Revenue of $11.6B representing a 2% decrease YoY. You have to remember, however, that guidance was for a 2% - 4% YoY decrease (normalized to exclude the SP Video CPE Business for Q2 FY2016 as CSCO is divesting itself of this business).

CSCO repurchased approximately 33 million shares of common stock in Q2 2017. These purchases were made under its stock repurchase program at an average price of $30.33/share for an aggregate purchase price of $1.0B.

What do these numbers tell me? CSCO is not a growth business but a steady business which still manages to make money. A lot of money! Just look at the financials for which I have provided a link above.

The other thing is that CSCO has almost $72B in cash and short-term investments. It could wipe out ALL its liabilities and still have $10B on the books!

The problem, however, is that when cash is held in foreign jurisdictions, said funds can’t be repatriated to the US without attracting a tax liability; CSCO only holds about $9.6B in the US at the end of Q2 2017. I know the new US President has discussed the possibility of a “Corporate Tax Holiday” and if this does come to fruition, I don’t see why CSCO would not take advantage of it.

While I am not privy to the CSCO Board level discussions, I imagine any deployment of repatriated funds would likely include the repurchase of shares and a one-time dividend or perhaps slightly higher quarterly dividends.

The projected Mean EPS for FY2017 appears to be somewhat varied although I note that the EPS Consensus Expectations table generated from TD Bank WebBroker has not been updated and reflects a Mean EPS estimate of $2.37 from 33 brokers (the low and high estimates are $2.30 and $2.43). The estimates found on the ValuEngine report appear to have been updated and reflect estimates from 9 analysts with a Mean EPS of $2.16 and a range of $2.12 - $2.21). 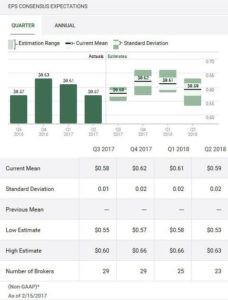 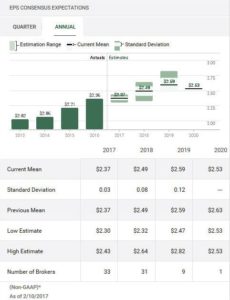 CSCO’s current PE is 15.67 as per Google Finance which strikes me as a bit high. The stock is trading at $32.82 and with my non-GAAP EPS of $2.34, the PE is more like 14. This is very close to the upper end of what I would expect to pay for CSCO and I suspect some investors are bidding up the price because they are chasing the dividend yield and are cautiously optimistic the Corporate Tax Holiday will materialize. If I presume the new $0.29/quarterly dividend remains in place for the next 4 quarters, I get an annual dividend of $1.16. Divide this by the current stock price of $32.82 and you get a dividend yield of 3.53%.

This dividend yield from a company of CSCO’s quality is acceptable from my perspective. Furthermore, if you look at CSCO’s historical dividend growth, it is outpacing the rate of inflation. The current annual dividend increase alone is 11.5% ($1.04 increased to $1.16). Imagine if we end up having a Corporate Tax Holiday!

Funny how what was once a super-charged high-tech growth stock is now a dividend play!

I really don’t know how to interpret what has been coming out of Washington since late January 2017; this is not meant to be a disparaging remark but just a personal observation. As a result, I hear all this rhetoric about a Corporate Tax Holiday but my level of certainty that it will occur is moderate at best. In addition, if it should receive the “go ahead”, I have no idea when it would occur and the terms and conditions under which companies would be able to repatriate funds currently “locked” overseas.

While many large multinationals have sizable offshore deposits, I suspect CSCO is probably at the upper end of the spectrum. As a result, given my opinion that the magnitude of CSCO’s foreign cash holdings is sufficiently sizable that a “yea” or “nay” decision by the current government would likely sway CSCO’s stock price several dollars, I am not prepared to initiate any option contacts on CSCO nor do I have any position as to what you, the reader, should do. I leave that to far brighter people than me.

We currently hold our CSCO shares in the FFJ Portfolio. While it represents a relatively small percentage of our overall holdings and it is the only tech stock we own, I am not prepared to increase our exposure other than just the regular 5 shares we acquire quarterly by reason of the automatic reinvestment of our dividends (remember that as a Canadian resident I get hit with a 15% withholding tax on all dividends received from US listed companies on US exchanges when held in non-registered accounts).

The world of technology changes so rapidly I have no clue which companies will be in existence many years down the road. One of the things that attracted me to CSCO was it sizable cash balance, which has subsequently grown from the dates in which we acquired shares. This gives them leverage to acquire smaller companies which may have developed technology that would dovetail nicely with CSCO’s current offering.

I don’t envision CSCO returning to the days of exponential sales growth. I see it more as a company that will continue to plod along, will generate strong cash flow, and will continue to reward shareholders with steady dividend increases. There is absolutely nothing wrong with a company of this nature and if CSCO’s profile now fits your investment criteria, I would not hesitate to acquire some shares over the course of a few months.

Disclosure: I am long CSCO.

By Charles Fournier|February 15th, 2017|Equity Investing|Comments Off on Cisco Stock Analysis – Sometimes Investment Ideas are Right Under Your Nose