Union Pacific – I Am Buying After Recent Pullback

I recently wrote a post about Canadian National Railway (TSX: CNR) which released its Q4 and FY2017 results on January 23, 2018; CNR is a core holding within the FFJ Portfolio and is also a member of the FFJ Master Stock List.

While UNP is one of the stocks include on the FFJ Master Stock list, I currently do not own any shares. The purpose of this analysis is to determine whether UNP’s current valuation and outlook present an opportunity to initiate a position.

UNP is a massive railroad with a current market cap of ~$105B as at January 26, 2018. The next largest publicly traded Class I North American railroad is CNR with a market cap of ~$58.9B as the larger Burlington Northern Santa Fe (BNSF) railroad is privately owned by Berkshire Hathaway.

Its rail system links 23 states in the western two-thirds of the US and serves many of the fastest-growing U.S. population centers. It operates from all major West Coast and Gulf Coast ports to eastern gateways and connects with Canada's rail systems. It is also the only railroad serving all six major Mexico gateways. 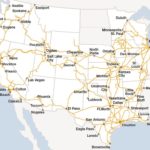 State by state guides to UNP’s system can be found here.

The following Condensed Statement of Income reflects FY2017 diluted EPS of $13.36. If we exclude the adjustments reflecting the impact of corporate tax reform, however, adjusted net income was $4.6B, or $5.79 per diluted share. 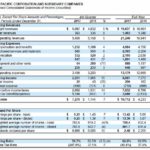 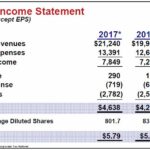 Details on the results of the 6 business groups can be found here. Going forward all results will be reported under the newly established four business groups: agricultural products, energy, industrial, and premium.

As evidenced from the following table, UNP’s revenue for the year was heavily impacted by favorable results in the movement of Industrial Products. The shipping of frack sand to the oil and gas producers has been a booming business for UNP. The reason for this is that most of the sand mines in the U.S. are in the Upper Midwest while most shale basins are west of the Mississippi where Union Pacific shares a near duopoly with BNSF. 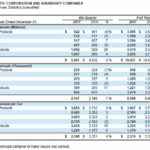 Turning to the statement of cash flows we see that UNP repurchased ~$4B in common shares and distributed ~$2B in dividends in FY2017. A portion of this was financed through the issuance of $2.735B of long-term debt. Despite the issuance of this additional debt, UNP’s debt to capital level improved; UNP’s current long-term debt is rated A3. 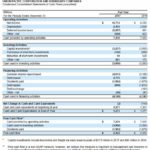 The following are the long-term debt credit ratings assigned by Moody’s to the other Class I railroads as at January 26, 2018. 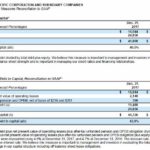 Given the strengthening of diesel fuel prices in 2017, UNP experienced an average 22% diesel fuel price increase to $1.81/gallon in 2017 versus $1.48/gallon in 2016. For years, UNP had old contracts which lacked effective fuel surcharges or which failed to fully reflect market rates. Those old contracts have been repriced over the years and management has indicated there are no material legacy contracts remaining.

The all important Operating ratio (OR), a major measure of profitability in the railroad industry, came in at 63% for FY 2017; this ratio is a railroad’s operating expenses as a percentage of revenue with a lower ratio being preferable. 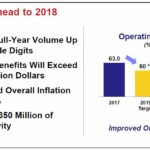 By comparison, CNR’s OR is typically in the mid to high 50s. This year CNR was faced with a series of outages on its main line and very cold December weather across the entire network which reduced train and car velocity and increased terminal dwell. As a result, CNR reported a 60.4% Operating ratio in Q4 2017 versus 56.6% in Q4 2016. The higher Operating ratio in Q4 resulted in the full year Operating ratio of 57.4% versus 55.9% in 2016.

On the January 25, 2018 analyst call, management expressed optimism for 2018 and disclosed the following items.

From a cash perspective, UNP expects the 2018 cash tax rate to be between 17% and 18%. The cash tax rate reflects the benefits from the lower federal tax rate and immediate expensing of eligible capital expenditures partially offset by the negative impact of prior year bonus depreciation programs. In the future, UNP expects its cash tax rate to trend in the direction of the statutory rate.

UNP’s plan calls for capital expenditures in the ~$3.3B region; guidance of reinvesting around 15% of revenue remains unchanged. 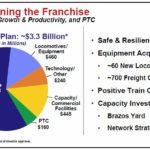 Any cash available after CAPEX spend will be returned to shareholders in the form of dividends and share repurchases.

Management expects volumes in Q1 and the full year will increase in the low single-digit range.

Pricing initiatives are expected to exceed UNP’s ~2% rail inflation cost in 2018; labor inflation and overall inflation under 2% will be driven primarily by lower expected health and welfare costs.

On the productivity side, UNP plans to achieve approximately $0.3B - $0.35B of savings in 2018 as it continues to focus on G55 and zero initiatives; UNP has a goal of achieving a 55% operating ratio over time with a goal of zero injuries.

While FY2017 diluted EPS was $13.36, this metric was skewed by the adjustments reflecting the impact of corporate tax reform. Without same, UNP generated adjusted net income of $5.79/diluted share. 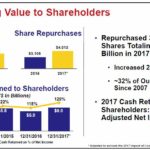 I like the railroad industry’s barriers to entry which I discussed in my recent CNR post. I do, therefore, want to add more exposure to the operators which have the greatest competitive advantages; I currently only have exposure to CNR.

UNP, having the largest US rail network of the publicly traded Class I railroads, is the railroad which has the greatest appeal to me.

UNP’s stock price has experienced a dramatic run up in the last few months having gone from ~$100 at the beginning of August 2017 to ~$142 on June 22, 2018 before the recent ~5% pullback subsequent to the release of FY2017 results which reflected a $0.01/share miss on earnings per share. This sudden drop on such a small miss suggests to me that many investors are currently somewhat irrational.

I will be taking advantage of the recent pullback and will acquire shares in this wide moat railroad.

Disclosure: I currently have no position in UNP and will be initiating a position within the next 72 hours.

By Charles Fournier|January 30th, 2018|Equity Investing|Comments Off on Union Pacific – I Am Buying After Recent Pullback