United Technologies – I Will Patiently Wait for a Pullback

United Technologies (NYSE: UTX) is a member of the FFJ Master Stock List. Shares are not held in the FFJ Portfolio but rather in undisclosed accounts. The majority of these UTX shares were acquired April 18, 2008 and all subsequently received dividends have been automatically reinvested.

UTX reported Q4 and FY2017 results on January 24, 2018. In addition, Rockwell Collins (NYSE: COL) shareholders overwhelmingly approved the sale to UTX; a definitive agreement had been reached in early September 2017 under which UTX will acquire COL for $140.00/share in cash and UTX stock.

The proposed $30B acquisition of COL, an avionics and cabin interiors supplier, will enable UTX to broaden its aerospace portfolio which is currently highly dependent on the geared turbofan engine. 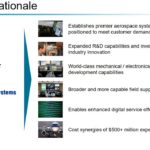 UTX is organized into the following 4 segments (Otis, UTX Climate Controls and Security, Pratt & Whitney, and UTX Aerospace Systems). Details on each segment can be accessed here.

Through the sale of Sikorsky in 2015, UTX streamlined its aerospace business. This sale reduced the company’s exposure to a difficult military helicopter market and enabled it to increase its focus on a portfolio of components and systems in which 70% of sales is derived from a growing commercial aerospace market.

UTX’s track record on product innovation and the durability and reliability of its products allows it to differentiate itself from the competition.

The development of a new aircraft engine, for example, can take the better part of 20 years.

UTX benefits from a high degree of customer switching costs.

In fiscal 2014, 2015, and 2016, for example, UTX derived 44%, 44%, and 46% of its consolidated net sales from aftermarket parts and services. The remainder of its sales were derived from original equipment manufacturing (OEM).

COL was founded as Collins Radio in 1933. It initially designed and produced short wave radio equipment. It grabbed the world’s attention when it supplied the equipment to establish a communications link with the South Pole expedition of Rear Admiral Richard Byrd in 1933.

On June 29, 2001, Rockwell Collins, Inc. was spun-off from Rockwell International and began trading on the NYSE.

The COL of today designs, produces, markets, and supports electronic communications, avionics and in-flight entertainment systems for commercial, military and government customers worldwide. Its aircraft electronics are installed in the cockpits of nearly every airline in the world and its communication systems transmit nearly 70% of U.S. and allied military airborne communications.

The following provides more color as to the rationale for the proposed acquisition and UTX management expectations subsequent to the acquisition. 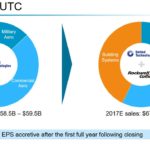 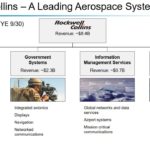 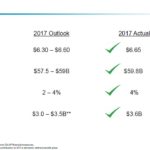 UTX experienced its best year of organic growth since 2014 at 4% with each of the 4 business units experiencing organic growth; Pratt & Whitney topped the group at 9%. 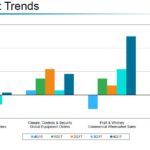 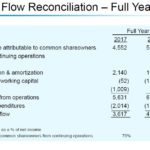 The following forecast for 2018 adjusted earnings per share (EPS) was provided January 24, 2018 and excludes COL. 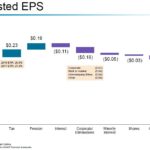 As in prior years, Q1 2018 EPS are expected to be flat relative to 2017 earnings. EPS growth is expected to be weighted more toward the second half of FY2018 by which time UTX should begin to benefit from its cost reduction efforts.

UTX has indicated that it will maintain its focus on growth through innovation and will continue to focus on cost reduction and in being disciplined in its allocation of capital.

Organic sales are expected to accelerate for the fourth straight year with growth ranging between 4% - 6%; sales in the range of $62.5B - $64B (excludes COL) are projected. 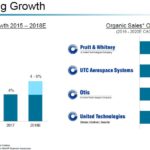 In addition, FCF in the range of $4.5B - $5B is expected even as it invests over $4B in capital expenditures (CAPEX).

UTX is of the opinion the global macroeconomic environment is expected to remain robust in 2018. It anticipates modest acceleration with growth above 2.5% in the US and notes that conditions in Western Europe have been improving as evidenced by what it sees in its order rates.

China reported strong Q4 GDP and is expected to grow above 6% again in 2018 but construction-related end markets in China for UTX will remain under price pressure, although an improvement from 2016 and 2017 conditions is expected.

The new tax changes are expected to lower UTX’s effective tax rate to 25.5% versus the 27.8% in 2017. This new level is based on the fact that ~60% of UTX’s earnings are generated overseas.

The U.S. federal tax rate was at 35% and UTX’s blended global rate was about 30%. It used to receive a couple of points of credits that reduced the effective tax rate to ~28%.

Under the new tax rules, the credits will be eliminated meaning UTX will be starting from a 30% blended tax rate. The benefit from recent U.S. tax law changes is a federal rate reduction of 14% (35% to 21%) on 40% of earnings generated within the US.

This means the new tax rate should be 24.5%. There are, however, some provisions that add another point which results in the 25.5% tax rate previously referenced.

Furthermore, the tax law changes will result in a net ~$1.5B cumulative cash payment on previously earned foreign income which will be paid through 2026.

In September 2015, the external rating agencies downgraded UTX’s debt ratings (“A” to “A-”, and “A2” to “A3”) with a stable ratings outlook; these ratings are at the low end of the upper medium grade tier. These downgrades were primarily attributed to the level of UTX’s completed and projected share repurchase activity.

The ratings agencies currently have these ratings under review as a result of the $14B - $15B UTX will need to borrow to complete the COL acquisition.

UTX has roughly $8B in cash held overseas and approximately two-thirds of its earnings come from abroad. It typically repatriates about $1B annually in overseas funds but under the new tax law it will, as previously noted, now incur a 21% versus a 35% corporate tax rate. Under the new tax law, UTX will be able to repatriate about $3B in funds held overseas which will enable it to repay the debt raised for the COL acquisition more quickly; the original intent was to repay ~$1B of the COL debt in 2018.

In addition to repaying its debt more quickly, the additional funds from the tax policy will enable UTX to also begin share repurchases this year as opposed to waiting another 4 -5 years as originally planned.

I view the COL acquisition as a smart move on UTX’s part since I perceive the commercial aerospace industry to be in an up cycle. My concern, however, is that UTX is paying up for COL. In addition, UTX’s share count will increase as the $30B purchase price will be financed with ~$14B - $15B in debt, the assumption of COL’s ~$7B in debt, and the issuance of ~65 million shares. This represents a ~8% increase to UTX’s current 799.1 million shares outstanding.

While I don’t think UTX has significantly overpaid for COL, I am of the opinion it will need to ensure it finds the $0.5B of annual cost synergies it has projected. 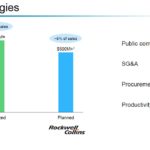 Given the above, I think UTX is slightly overvalued at current levels.

While UTX’s dividend history reported here only goes back to 1980, UTX has paid cash dividends on its common stock every year since 1936. 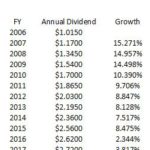 I view the acquisition of COL by UTX as a smart move. My concern is that UTX’s shares are fully valued; UTX’s shares have experienced a significant run up in recent months which I attribute in part to ‘the fear of missing out’.

I certainly view UTX is a high quality company but I am of the opinion that it would be best to wait for UTX to retrace to a lower level ($130 or below) before adding to my existing position.

By Charles Fournier|January 30th, 2018|Equity Investing|Comments Off on United Technologies – I Will Patiently Wait for a Pullback