TOTAL S.A. (TOT) is a company headquartered in France which is engaged in the exploration and production of oil and gas, refining, petrochemicals, and the distribution of energy in various forms to the end customer.

On September 24, 2019, it held its 2019 Investor Day at which time it provided an update on its strategy for profitable and sustainable growth, the status of the $8.8B acquisition of assets from Occidental Petroleum Corporation, and the planned sale in 2019 - 2020 of $5B in non-core assets which only break even at high oil and gas prices.

TOTAL S.A. (TOT), headquartered in Paris, France, has produced oil and gas for almost a century. It currently employs more than 104,000 people and is one of the world’s largest energy companies with a presence in more than 130 countries on five continents. Activities include the exploration and production of oil and gas, refining, petrochemicals, and the distribution of energy in various forms to the end customer.

A comprehensive overview of TOT can be found in its 2018 Fact Book.

Although I have been long 1000 American Depositary Receipts (ADRs) since late 2011, I have never previously written an article about TOT. I now take this opportunity to briefly look at TOT given that it held its 2019 Investor Day on September 24, 2019 at which time senior management provided a comprehensive overview of multiple initiatives to improve the overall performance of the company so as to enhance shareholder value.

Should you be interested in learning more about the implementation of TOT’s strategy for profitable and sustainable growth which takes into account the evolution of energy markets, I encourage you to review the following highly informative investor presentations presented at TOT’s 2019 Investor Day.

In addition, the key messages delivered at the 2019 Investor Day can be found here.

TOT focuses on projects with a low breakeven and if you look at page 14 of the Strategy and Outlook presentation you will see that over that past few years TOT has dramatically lowered its cash breakeven to below $30/barrel from ~$100/barrel as recently as 2014. This has been achieved through:

In May 2019, TOT announced that it had reached a binding agreement with Occidental Petroleum Corporation (OXY) to acquire Anadarko Petroleum Corporation’s (APC) assets in Africa (Algeria, Ghana, Mozambique, South Africa) for a consideration of $8.8B in the event of a successful completion of OXY’s bid to acquire APC; OXY announced the completion of its APC acquisitions in August 2019.

During TOT’s Investor Day, management provided the investment community with an update on the planned purchase of Anadarko Petroleum Corp.’s assets in Africa.

An update on TOT’s oil and liquefied natural gas projects in U.S., Mozambique, Nigeria, the Arctic, and Papua New Guinea was also provided at Investor Day.

TOT’s active portfolio management policy has resulted in multiple acquisitions in gas and electricity. The company is also preparing for the future by focusing on core strengths in the gas and deep offshore segments.

Multiple acquisitions have created some uncertainty in the investment community around the company’s recent growth and M&A strategy. In order to offset some uncertainty, TOT has demonstrated ongoing discipline around the balance sheet and upstream portfolio by announcing the planned sale of $5B in assets over 2019 – 2020.

The assets to be divested will be those that only break even at high oil and gas prices. Examples include the recent disposal of mature assets in the British North Sea. Other divestitures will come from the Exploration and Production segments of the company. In addition, TOT will be reducing its stake in some renewable energy projects.

A comprehensive Risk overview can be found commencing on page 103 of 424 in this document. 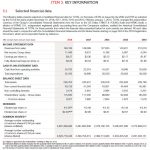 Q2 and 6 Month Results and Guidance

TOT’s most recent financial results can be found here.

Production growth of ~9% is expected for FY2019. Production growth should improve TOT’s cash flow growth over the next 5 years; TOT anticipates ~5% average volume growth through 2022 which is the highest amongst its peers.

Although this rate of growth is highly aggressive for a major integrated oil and gas company, TOT has in excess of 10 projects under construction and there is also a long list of projects awaiting final investment decisions.

The consensus is that margins should improve as TOT has dramatically reduced its operating costs.  It is already one of the lowest cost operators having reduced operating costs dramatically since 2014 through design simplification, reduced equipment cost, and renegotiation of fiscal terms (refer 2019 Investor Day presentation). The magnitude of the cost reduction should help TOT which lags its peers in upstream margins due to a higher tax burden.

Multiple acquisitions in recent years have resulted in an increase in TOT’s net-debt-to-capital ratio to 20.6% as at June 30, 2019 from 16.5% as at June 30, 2018. Despite this increase, TOT’s long-term debt is highly rated although it is lower than that assigned to Exxon, Chevron, Equinor, and Royal Dutch Shell; Moody’s has not rated PetroChina Company Limited as it is the listed arm of state-owned China National Petroleum Corporation.

S&P Global has assigned a higher long-term debt credit rating to TOT than members of its peer group with the exception of Chevron and Exxon. TOT’s rating is the same as that assigned to China Petroleum and Chemical Corporation.

Moody’s initiated coverage in November 1991 and assigned an A1 (top tier of the Upper Medium Grade) Senior Unsecured credit rating. Over the next few years, TOT’s credit rating was upgraded to Aa1 (one notch below AAA) but the rating was withdrawn February 2006. Moody’s resumed coverage December 2015 and assigned an Aa1 rating but downgraded TOT to Aa3 (lowest tier of the high grade category) in April 2016; this rating is still in effect.

During TOT’s Investor Day presentation, management repeatedly stressed how the company is growing selectively to improve its non-cyclical cash flow. 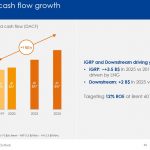 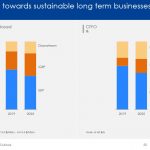 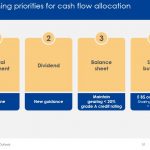 Details of the upcoming two dividend payments can be accessed here and here.

Some investors rely on stock screeners to seek investments which meet certain search parameters. Dividend yield is often one of the metrics by which investors narrow the universe of stocks for further analysis.

Looking at various stock screeners we see that TOT’s $2.92 annual dividend provides investors with a ~5.7% dividend yield; this yield is based on the current ~$51 share price. The actual dividend yield, however, will differ depending on your country of residency.

If you are a Canadian resident it is important that you reduce the dividend by 30% thus resulting in a dividend yield closer to ~4%...even if the TOT ADRs are held in a tax advantageous account. The reason for this is that TOT is an unsponsored ADR.

NOTE: I hold Diageo plc (DEO) ADRs in the same account and incur no withholding tax on the DEO dividends because DEO is a sponsored ADR.

Despite the 30% tax on the TOT dividend income, the after tax dividend yield is reasonably attractive.

Another consideration when investing in TOT is that the quarterly dividends are declared in Euros and are subsequently converted to USD. As a result, investors face foreign exchange risk.

Although TOT’s dividend growth in recent years has been negligible, TOT’s management expressed confidence during the September 24, 2019 Investor Day that investment in fast-growing gas and electricity markets will steadily increase cash flow. The plan is now to accelerate dividend growth by boosting the payout by 5% - 6% annually in the coming years; this is an increase from a previous plan for 3% growth.

In the first half of FY2019, TOT generated $2.16 in fully diluted EPS. Oil and gas prices can be volatile thus making it difficult to project earnings. In addition, TOT’s oil and gas production involves operating in politically unstable regions where production can experience material reductions due to geopolitical and/or security issues (eg. Libya, Nigeria, Syria, and Yemen). Sanctions put in place that target Russian gas producer Novatek could also put at risk the value of TOT’s multi-billion-dollar investments in Russia.

I would expect investors to assign a lower valuation to TOT than to XOM and CVX given that its operations are predominantly in more volatile geographic regions and because the credit risk is slightly greater.

Having said this, I like that TOT leads its peer group from a cost of production standpoint and that it generates from cash flow. I, therefore, view the forward valuation range reflected above as being acceptable for my purposes.

What impresses me about TOT is that, under the guidance of the current CEO and Chairman who assumed his role in 2014 after having served in a variety of roles since joining TOT in 1997, it has largely executed on the strategy to cut costs and reduce spending. This has enabled it to take advantage of the oil price slump to actively acquire resources at attractive valuations.

I also like that TOT is placing greater focus than in the past on improving the stability of shareholder returns and accelerating dividend growth.

Disclosure: I am long TOT.