In reviewing my overall portfolio and my Stock Picking Rules to Follow, I realized our portfolio is underweighted in the Consumer Goods sector.

Given that Kellogg (NYSE:K) recently released its Q4 and FY2016 results and forecast, I thought it would be an opportune time to determine whether it would be a worthwhile addition to our holdings.

Operations are managed through operating segments based on product category or geographic location. These operating segments are evaluated for similarity with regards to economic characteristics, products, production processes, types or classes of customers, distribution methods and regulatory environments to determine if they can be aggregated into reportable segments.

Results of operations are reported in the following reportable segments: 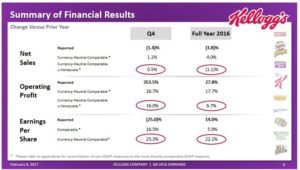 K’s largest customer, Wal-Mart Stores, Inc. and its affiliates, accounted for approximately 20% of consolidated net sales during 2016, 21% in 2015, and 21% in 2014, comprised principally of sales within the United States.

The following Net Sales and Gross Profit Margin chart does not reflect an enviable performance record. K has spent the last several years doing what it can to wring out every possible cost from its distribution network and the work is still not done. At some stage, K needs to grow its revenue.

K faces a huge challenge in this regard in that it needs to contend with General Mills (NYSE: GIS) and generic brands. It no longer has the economic moat it once had. 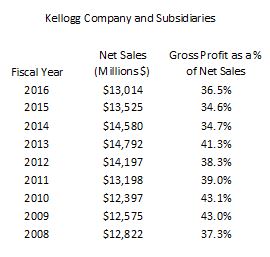 Exit from the DSD

K historically used a Direct Store Delivery ("DSD") selling and distribution system. It announced that it is shifting the affected portion (roughly 60%) of its U.S. Snacks segment to the warehouse distribution system through which it currently distributes the rest of U.S. Snacks and all of its other North America businesses.

Exiting DSD means K will no longer ship product directly to its retail customers' stores but rather to their chain-wide warehouses. This will enable K to leverage the scale and technology of its, and its customers', warehouse systems. This is expected to result in greater cost-efficiency and asset utilization while freeing up resources to invest in future growth. 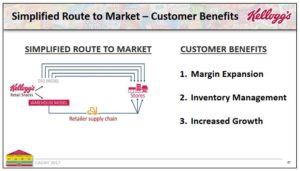 K anticipates a reduction in net sales in U.S. Snacks during 2017 because of initial volume disruption and the impact of reducing stock-keeping units. In addition, it will include a reduction in list-prices reflecting the elimination of DSD services provided to retailers.

Overhead savings from the exit of the DSD system are expected to begin to accrue in Q4.

In November 2013, K announced Project K, a global efficiency and effectiveness program. The purpose of this four-year efficiency and effectiveness program is to drive the creation of new and improved capabilities in various parts of the company. In addition, it is also creating the supply chain of the future and a global business services structure. The global business services structure is streamlining some functional areas within the company.

When launched, Project K was expected to generate $425 - $475 million of annual cost-savings by 2018. The transition from DSD will contribute to an expanded Project K program whose savings will extend through 2019. Savings for Project K are now projected to reach $600 - 700 million through 2019.

These savings, in addition to those generated by K’s zero-based budgeting efforts, will provide K with the opportunity to make significant investments in the business while improving margins.

K is working to stabilize net sales with an aim to return to growth. Its volume and price impact of exiting DSD, the elasticity impact of certain pricing actions, and the effect of portfolio optimization, in conjunction with current industry dynamics, is likely to result in a decline in currency-neutral comparable net sales (excluding Venezuela) by approximately 2% in 2017. 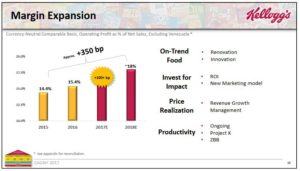 The four elements to this accelerated margin expansion plan are:

As K continues to implement zero-based budgeting, it may identify additional efficiency and effectiveness opportunities in advertising through 2017. K has indicated that it may choose to reinvest these savings back into advertising, or other areas such as food reformulation or capacity to drive revenue growth, or to achieve its 2018 Margin Expansion target.

On February 21, 2017, K presented an update on its 2020 growth strategy at the Consumer Analyst Group of New York (CAGNY) Investor Conference. 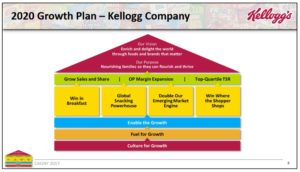 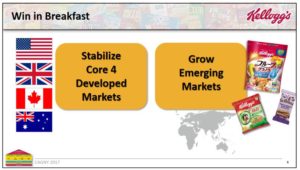 Be a Global Snacks Powerhouse 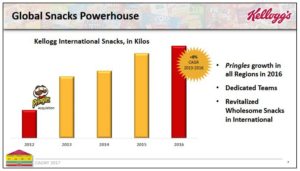 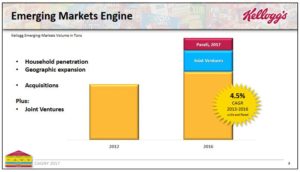 Win Where the Shopper Shops 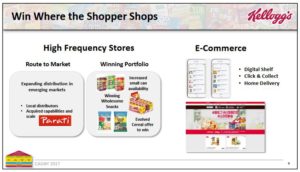 Kellogg is a Dividend Achiever having increased its dividend for 10+ consecutive years. In addition, based on its current $0.52/quarter dividend, K yields slightly in excess of 2.8%. Both these factors might lull some investors into purchasing K shares. I would caution investors to look beyond the dividend. As I compose this post, K is trading at $73.60 and its PE is in excess of 37.5. The 5 year average PE is just shy of 31. Not only does the PE grossly exceed the historical average, it is at a level where there is little margin for error.

It can take several years for you to generate a reasonable return on investment if you overpay. This caveat also applies to wonderful companies and, making matters worse, I do not deem K to be a wonderful company relative to the universe of companies in which you can invest. Looking at this graph, K is a weaker “HOLD” rating than 3 months ago. I agree will the consensus rating provided by 13 research providers.

Warren Buffett has offered the suggestion that in order to improve your ultimate financial welfare think of having received a ticket with only 20 slots. These slots offer you 20 punches that represent all the investments you can make in a lifetime. Once you punch through the card, you can make no further investments. I know I would not want to use up one of my slots to acquire K.

I undertook this analysis to determine whether K would be a suitable addition to our portfolio as we are somewhat underweight the Consumer Goods sector. After reviewing K, I have decided I will not initiate a position.

While K has a plan to improve business results, I think K is priced to perfection. Investors appear to already be pricing in the projected improvements.

Furthermore, my Stock Picking Rules to Follow includes buying best of breed. K does not strike me as a company that meets this criterion.

I am reminded of Andrew Carnegie’s adage that:

Look round you and take notice; men who do that do not often fail. It is easy to watch and carry the one basket. It is trying to carry too many baskets that break most eggs in this country. He who carries three baskets must put one on his head, which is apt to tumble and trip him up. One fault of the American businessman is lack of concentration.”

K is not another basket I need to carry.

Disclosure: I do not own K and have no intention of acquiring K in the foreseeable future.