I am always looking for attractively / reasonably valued companies and recently saw an Ingredion Incorporated (NYSE: INGR) tanker truck while commuting on one of our city’s major arteries. I am somewhat familiar with the company but had never researched it. A cursory look at the most recent stock ticker metrics revealed that INGR has retraced ~25% from a high of $146.28 set near the end of January 2018.

With INGR trading at ~$109.67, I now take a look at whether the pullback is the result of some permanent long-term impairment to the business, the company is merely encountering short-term headwinds, or the stock was just overvalued and and has now retraced to fair value / undervalue territory.

INGR might not be a household name but it traces its roots to 1906. It began as Corn Products Refining Co. (subsequently CPC) through the merger of leading US corn refiners and was ultimately renamed Ingredion in 2012.

It is a leading global ingredients solutions provider which supplies a broad range of customers in many diverse industries around the world, including the food, beverage, paper and corrugating, brewing, pharmaceutical, textile, and personal care industries, as well as the global animal feed and corn oil markets.

All products are derived primarily from the processing of corn and other starch-based materials, such as tapioca, potato, and rice.

The company is managed on a regional basis. Its operations are broken out into 4 reportable business segments: North America, South America, Asia Pacific and Europe, Middle East, and Africa (“EMEA”).

Demand for its products is generally balanced throughout the year. Demand for sweeteners in South

America, however, is greater in the 1st and 4th quarters (summer season) while demand for sweeteners in North America is greater in the 2nd and 3rd quarters. No material seasonal fluctuations in INGR’s consolidated net sales is experienced due to the offsetting impact of these demand trends.

The starch and sweetener industry is highly competitive with many products viewed as basic ingredients that compete with virtually identical products and derivatives manufactured by other companies in the industry. The U.S. is a highly competitive market where there are other starch processors, several of which are divisions of larger enterprises. Some of these competitors have vertically integrated their starch processing and other operations. The largest competitors are:

INGR’s operations in Mexico and Canada face competition from U.S. imports and local producers including ALMEX, a Mexican joint venture between ADM and Tate & Lyle.

In South America, Cargill has starch processing operations in Brazil and Argentina.

There are also many smaller local corn and tapioca refiners which operate in many of INGR’s markets.

Competition is largely based on price, quality, and product availability.

Ingredion has morphed over the years through the acquisition of several companies with the most recent acquisitions being:

Volumes grew by 2%, driven by core and specialties growth and while INGR delivered reported and adjusted EPS growth, operating income was negatively impacted by the following operational headwinds.

INGR has begun to mitigate inflationary pressures through pricing actions, customer contract management, and the acceleration of network optimization and cost-reduction initiatives. It is also investing in higher-value specialty expansion projects and continued growth from the specialty products portfolio is expected to continue.

INGR has reassessed its broker contracts and is recovering higher freight costs where possible. It does not anticipate the full recovery of increased rate costs during 2018 but expects reduced freight cost impacts throughout the rest of FY2018.

It also experienced higher production costs caused by inconsistent demand in the Northeast and Canada during the winter. At the end of Q1, INGR had higher starch inventories but these inflated inventory levels are expected to be rebalanced by the end of Q3.

INGR was also hard hit by excessive rainfall in Thailand which started in 2017. This has impacted both the tapioca harvest and root quality which significantly increased raw material cost during Q1. In fact, the Thai tapioca industry has not experienced such a sharp and prolonged rise in tapioca costs since 2010.

In order to address the tapioca supply issue, INGR is actively working to adjust pricing to offset the rapid cost increases. Tapioca price pressure is expected to continue in Q2 and Q3 until the next harvest in Q4. Although INGR experienced an unprecedented run-up in tapioca costs in the last 7 months, its extensive production and sourcing network has enabled it to continue to supply customers.

While net sales were up for the quarter with higher volumes and foreign exchange more than offsetting lower price/mix, gross profit margin was lower by 10 bps.. This is because higher freight and production costs in North America and higher tapioca costs in Asia Pacific more than offset lower manufacturing and restructuring costs and better performance in South America and EMEA. 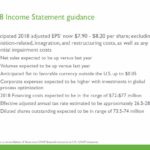 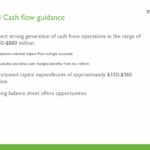 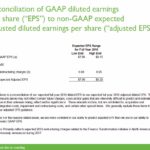 Given these short-term headwinds, INGR has lowered its guidance for 2018 adjusted EPS to $7.90 - $8.20 from its initial guidance of $8.10 - $8.50 which was provided February 1, 2018; this guidance continues to exclude acquisition-related integration and restructuring costs as well as any potential impairment costs. 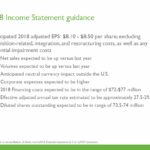 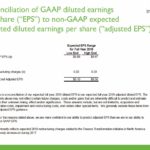 Management continues to expect cash from operations in 2018 to be $0.83B - $0.88B; this excludes the onetime cash receipts benefit from tax reform. INGR continues to forecast $0.33B - $0.36B in capital expenditures around the world in 2018 to support growth and cost and process improvements.

Moody’s upgraded INGR’s senior unsecured long-term debt in April 2018 from Baa2 to Baa1. This is the top tier of the lower medium grade range.

S&P Global has rated INGR BBB since 2008 and there is no indication this credit rating is under review. This is the middle tier of the lower medium grade range.

These ratings are acceptable from my perspective.

INGR’s dividend and stock split (one 2 for 1 stock split in early 2005) history can be found here. INGR started paying a dividend in 1998. Looking at the dividend history, however, we see that it has frozen its dividend for several consecutive quarters.

The current $0.60 share/quarter dividend payable July 25th to shareholders of record as at July 2nd will mark the 4th consecutive dividend at this level. I anticipate INGR will announce a ~$0.04/quarter/share dividend increase in September; business conditions are such that I do not envision another $0.10 increase to match that announced in 2017. 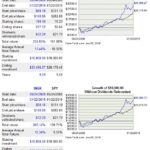 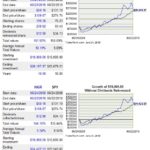 INGR expects that, over time, share repurchases will offset the dilutive impact of shares issued under the stock incentive plan.

In Q1 2017 INGR repurchased 1 million common shares in open market transactions at a cost of ~$0.123B. There were no additional open market shares repurchased during the remainder of 2017.

The following reconciliation of common stock share activity for the years ended December 31, 2017, 2016, and 2015 shows that the number of issued and outstanding shares has been relatively consistent over the past several years. 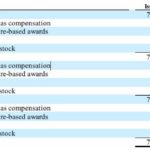 The recent ~25% pullback in INGR’s stock price now makes it a far more appealing investment than earlier this year even though management has reduced its guidance for FY2018. In my opinion, however, I think there is the likelihood INGR’s stock price will retrace further. My rationale for this train of thought is that the short-term headwinds do not appear to have yet come to an end. In addition, I envision the implementation of trade tariffs by the US and rataliatory trade tariffs by foreign countries have a strong possibility of triggering a long overdue overall market pullback.

I am cautiously optimistic patient investors will be rewarded before 2018 comes to an end with better entry points for high quality companies which have become, in my opinion, overvalued. I am not about to initiate a position in INGR at this juncture but will continue to monitor the company’s performance and to reassess my current investment decision.

Disclosure: I do not currently own shares in INGR nor do I intend to purchase shares within the next 72 hours.