At the time of my July 3 2018 ‘Get Paid to Wait for This Undervalued Company to Appreciate in Value’ article, each Brookfield Property Partners L. P. (TSX: BPY-UN) (NASDAQ: BPY) unit was trading at USD $18.96 (CDN$24.97) but BPY’s Q1 presentation indicated each unit was valued in excess of USD $30.

Based on my analysis, I concluded in my July 3rd article that while the long-term outlook for BPY was attractive I had no idea when BPY would become fairly valued. I was, however, happy to accept a ~6.65% dividend yield and ended up acquiring units in for the FFJ Portfolio.

Now that the Brookfield group of companies has held its 2018 Investor Day on September 26th, I thought it would be an opportune time to revisit BPY.

Brookfield Asset Management (TSX: BAM-a) (NYSE: BAM) is one of the largest global investors in real estate with BPY being its publicly listed vehicle for real estate investments.

BPY was formed in 2013 when BAM spun off BPY. It owns, operates and develops one of the largest portfolios of office, retail, multifamily, industrial, hospitality, triple net lease, self-storage, student housing and manufactured housing assets. Its portfolio features some of the world’s best-known commercial properties.

Its investment objective is to generate attractive long-term returns on equity of 12%−15% based on stable cash flows, asset appreciation and annual distribution growth of 5%−8%.

BPY seeks to accomplish this objective by adhering to BMA’s 5 core principles:

As with all members of the BAM group of companies, BPY continually recycles capital from stabilized assets at or near peak values into higher-yielding strategies.

What sets BPY apart from its peers is its unique ability to allocate capital into private real estate funds. Furthermore, not all companies within this small peer group have the expertise to modify and enhance acquired assets so as to significantly increase their value and cashflow.

BPY looks to double its original investment capital over the investment lifecycle and it sets a defined investment period on a per project basis; its intent is not to hold an asset in perpetuity.

Roughly 30% of its profits from its real estate investments come from current earnings with the majority coming from a realization event that typically takes place when assets are sold and a gain is realized; Investors should keep in mind that profits from these realization events are NOT included in the definition of Funds from Operations (FFO).

In aggregate since 2014, BPY has generated ~$0.9B of profits from realization events. As funds mature and investment business plans mature, BPY anticipates the pace and size of these realization events to increase.

Since its establishment in 2013, BPY has developed a growing earnings stream through 5 major acquisitions. These acquisitions have resulted in a major transformation of the company and there is now ~$90B property assets under management of which ~$63.1B are in the United States. 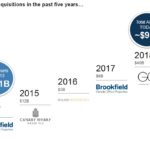 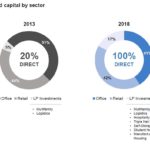 In my July 3rd article I touched upon the acquisition of GGP; this acquisition was completed August 28th. This acquisition fits well with the 5 core investing principles referenced earlier in this article.

What GGP brought to the table was ~8% of the high quality retail space in the US.

The source of financing for this acquisition was as follows: 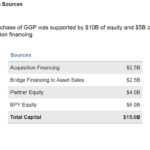 BPY has achieved earnings distribution growth for 5 consecutive years since launch. It has grown Cash Flow From Operations (CFFO) by 9% and its annual distributions have grown 6%. In addition, BPY has reduced its payout ratio from 90% of CFFO to its 80% target level.

In the early years, these gains were from the sale of individual assets or smaller portfolios. As these funds mature and investment-level business plans are executed, however, the pace and size of realizations will increase. 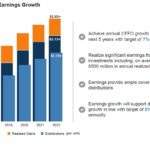 Future earnings growth is expected to be strong and the main drivers of this growth are expected to remain unchanged. 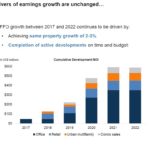 BPY is confident it will easily be able to maintain its payout ratio of 80% of FFO.

Higher returns from past recycling activities have come largely from BPY’s opportunistic investing strategy. For example, a Limited Partnership (LP) investment is an opportunity fund sponsored by BAM. These are essentially finite life funds that return all of the capital invested and profits generated over the defined investment period which is typically ~10 years.

In BPY’s September 26th presentation, BSREP 1 and BSREP 2 were provided as examples to demonstrate how BPY expects to achieve its profitability and FFO objectives.

There are 18 separate investments in which the typical investment holding period is 5 years.

BPY expects to generate ~80% of profits from realization events.

This fund is currently tracking at a ~21% net IRR and a net multiple of capital of 2.3 times.

Part of this increase in NOI will come from increasing occupancy (ie. office business, maintaining a high level of occupancy in the retail portfolio, and new rents that are higher than expiring rents). 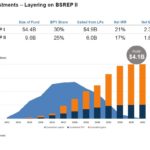 All told, the ~$4B investment is expected to generate profits in excess of $4B.

BPY’s plan to use this self-funding strategy over the next 15 years is expected to continue to provide significant cash flows. 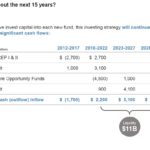 I am a relatively conservative investor so I want to ensure that a company in which I have invested is going to have the wherewithal to meet its distributions. BPY’s track record gives me some comfort that its target payout ratio leaves sufficient retained cash to protect distribution levels, sustain properties and fund future growth. 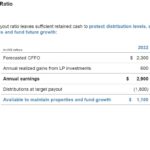 While BPY has been previously ramping up its leverage levels to above target levels, BPY is now at the stage where it can start to reduce leverage. This will be achieved through the sale of incremental malls to repay acquisition debt put in place to acquire GGP and through the recycling of capital activities.

BPY is confident it will be able to increase equity and reduce leverage thereby putting it in a great position to meet or beat targets by 2022 or sooner. 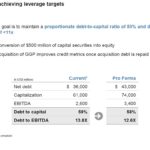 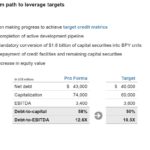 I also gain some comfort that the Brookfield group of companies, in general, employs a conservative financing strategy. In the case of BPY, the loan to value ratio is in the 50% - 60% range on every asset that is financed.

BPY has over 600 separate recourse loans bound together by NOTHING! It also has 250 individual lending relationships.

It raises debt in local markets to match currency and to achieve the best execution and it employs a strict and disciplined approach to loan covenants.

I have been a long-time BAM shareholder and received BPY units (the TSX listed units) when this entity was created. My exposure to BPY, however, was relatively insignificant until July this year when I analyzed BPY a bit more closely and decided to acquire 490 units. Within the past few days, BPY paid out its quarterly distributions and I have set up BPY on ‘autopilot’ so that new units will automatically be acquired upon receipt of the distributions.

I am impressed with the BAM group of companies in general and intend to periodically acquire additional BPY units.

What appeals to me about all the BAM companies is that there are very few other companies with the expertise to acquire assets and to ‘transform’ them to generate superior returns.

I do not have the expertise to consistently generate the types of returns BPY can generate. By investing in BPY, I am essentially ‘piggy backing’ on highly astute investors who have a proven track record which allows them to attract money from the wealthy of the wealthy. 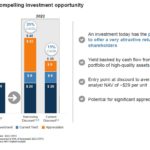 In my opinion BPY is currently undervalued in what is, for the most part, an overvalued market. I suspect that as BPY executes its game plan, Mr. Market will also come to the realization that BPY units are undervalued.