I periodically review the financial status of the companies in which we own shares hence the reason for today’s post. This post will be relatively brief since I recently reviewed ADP in my Automatic Data Processing Stock Analysis: A Wonderful Company. Less Than Wonderful Valuation post.

Full details can be found in ADP’s February 1, 2017 Earnings release. Highlights are provided below. 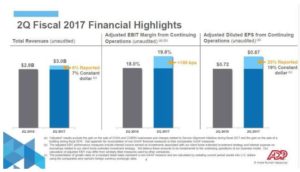 When I think of ADP, I think of all the client money it has on its books “In Trust” on which it generates interest income. Regrettably, our interest rate environment has been low for several years and ADP must invest in predominantly AAA/AA rated investments (safety and liquidity is paramount). As a result, the interest income ADP generates is, in the great scheme of things, nice but not that significant.

Outlook for Remainder of Fiscal 2017

While there is talk of interest rates increasing, which would be nice for ADP, I don’t think the increase will be sufficient to move the bottom line for ADP in FY2017.

In January 2017, ADP made a small acquisition. It acquired The Marcus Buckingham Company, Inc. for total cash consideration of ~$0.070B, and contingent consideration of up to $0.035B. This contingent amount is payable over the next 3 years, subject to the achievement of specified financial metrics and/or other conditions.

ADP now expects full year revenue growth of about 6% compared to its prior forecast of 7% - 8% growth. This revenue forecast continues to include about 1% of pressure from the disposition of its CHSA and COBRA businesses. 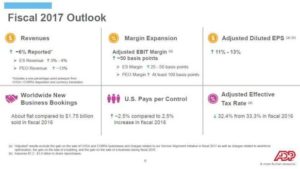 The share repurchases forecast has now being revised to assume $1.2B - $1.4B which will be funded by existing balance sheet cash. The previous forecast was for repurchases to be in the range of $1.0B - $1.4B.

ADP’s shares have dropped about $5 subsequent to its Q2 2017 earnings announcement. When I last wrote about ADP, shares were trading about $5 higher than the current price of $96.32.

So, is ADP now an attractive buy?

I enclose earnings estimates which I generated from TD WebBroker and from the most recent ValuEngine report. The mean FY2017 and FY2018 non-GAAP estimated EPS from multiple analysts is $3.66 and $4.65, respectively. While some analysts have provided estimates for 2019, I don’t know how anybody can accurately predict what is going to happen that far in the future. Even the 2018 estimate seems like it is a bit of a shot in the dark to me. I, therefore, give little credence to estimates that far in the future and will rely on the FY2017 estimate of $3.66 to determine what I consider a reasonable price to pay for ADP. 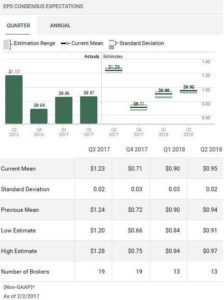 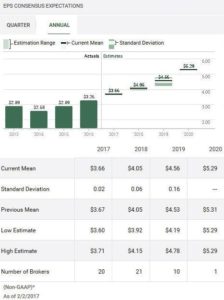 I generally like to acquire shares in companies when the PE is sub 20. I can’t, however, recollect a time in all the years we have owned ADP when the PE got that low other than when we were all presented with a wonderful buying opportunity during the Financial Crisis.

Now let’s look at ADP from a dividend yield perspective. ADP increased its quarterly dividend from $0.53/share to $0.57/share with its beginning of January 2017 payment. ADP’s Board has declared a regular quarterly dividend of $0.57/share payable April 1, 2017 to shareholders of record on March 10, 2017. If we presume ADP sticks with its pattern of only increasing its dividend once a year, we get an annual dividend of $2.28. Using the current price of $96.32 we get a dividend yield of 2.37%. If ADP’s shares were to drop to $92, the annual dividend yield would increase to 2.47%.

This dividend yield alone might be enough to dissuade investors from buying ADP shares. Had I thought that way years ago I would undoubtedly be kicking myself today. I can categorically tell you that ADP’s dividend growth over the years now brings a smile to my face. Sometimes you can’t be too rigid in your thinking and say, I will not buy anything unless the dividend yield is at least 5% (for example). I think investing is an art as opposed to an exact science.

When I wrote my Automatic Data Processing Inc.: A Wonderful Company. Less Than Wonderful Valuation post in December 2016, I thought ADP was too expensive. I still think it is too expensive.

I will wait for a pullback to at least $92 and will reassess the situation at that time to determine whether there is any reason why I should change my mind not to buy more shares at that price.

Disclosure: I am long ADP.