Why I Am Reluctant to Deploy New Money 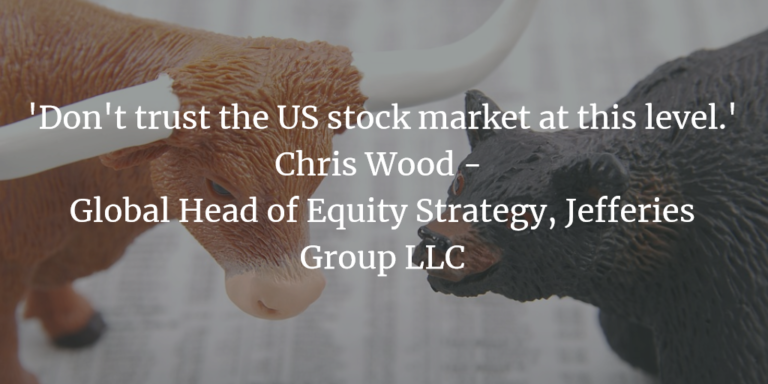 I am in agreement with Chris Wood, Global Head of Equity Strategy at Jefferies Group LLC, who currently views North American equity markets with a great deal of skepticism.

There is certainly a difference of opinion as it relates to current North American equity market conditions. Some investors argue the broad North American market is unlikely to experience a pullback of significance any time soon. Other investors are of the opinion a pullback is likely but the magnitude, duration, and timing of any pullback is subject for debate; in this recent article I included a quote from Howard Marks, co-founder of Oaktree Capital, in which he states ‘overpriced is not the same thing as going down tomorrow’.

For the most part I am an optimist. When it comes to deploying new money in this current environment, however, I am not quite the optimist.

Although I am automatically reinvesting our dividend income, the only meaningful purchase I have made in recent weeks was the acquisition of a few hundred additional United Technologies Corporation (UTX) shares on June 11th following the announcement of the proposed merger between UTX and Raytheon Company (RTN); I disclosed this purchase in this recent article.

It would appear I am in good company when it comes to being cautious in this environment. Just recently I read that Chris Wood, recently appointed as Global Head of Equity Strategy at Jefferies Group LLC, was eyeing the all-time high North American equity markets with a great deal of skepticism.

Wood is one of Asia’s best-known market strategists who is often near the top of rankings in magazines like Institutional Investor. He made his name by correctly predicting Japan’s era of stagnant growth and bear markets in the 1990s. He also sounded early alarms about the US housing market, warning that a surge in mortgage securitisation would create huge gains in property prices and similar declines once the credit spigot was turned off.

Wood is of the opinion that the price of oil is a headwind that could upend the market. If oil prices spike on Persian Gulf tensions and we get $100+ oil, we could see a sudden drop in Treasury bond prices and an increase in bond yields.

Should higher yields result from spiking oil prices we could witness a sharp de-risking. In essence, we would see the extremely rapid selling of large volumes of stocks triggered by these computer models. This is a particularly high risk when stocks and bonds are highly correlated.

In addition to being fully cognizant of the risks presented by Wood, I am also following the messages being communicated by the Federal Open Market Committee (FOMC).

‘In the weeks since our last meeting, the crosscurrents have re-emerged. Growth indicators from around the world have disappointed on net, raising concerns about the strength of the global economy. Apparent progress on trade turned to greater uncertainty, and our contacts in business and agriculture report heightened concerns over trade developments. These concerns may have contributed to the drop in business confidence in some recent surveys and may be starting to show through to incoming data. Risk sentiment in financial markets has deteriorated as well. Against this backdrop, inflation remains muted.

While the baseline outlook remains favorable, the question is whether these uncertainties will continue to weigh on the outlook and thus call for additional monetary policy accommodation. Many FOMC participants now see that the case for somewhat more accommodative policy has strengthened.’

All eyes were on this past week’s Fed meeting because there has been growing pressure on the Fed to help out the economy.

Going into this meeting, there was some speculation the Fed could surprise the investment community with a rate cut.  This did not happen but we now see the Fed appears to be more open to cutting rates in the future; St. Louis Fed President James Bullard actually voted to cut rates immediately.

In this recent Fed policy statement, the overall strength in the economy was noted. Following previous Fed meetings, Press Releases included the term ‘patience’ from the perspective of the possibility of increasing interest rates. Now the Fed has stated:

‘The Committee continues to view sustained expansion of economic activity, strong labor-market conditions and inflation near the Committee’s symmetric 2 percent objective as the most likely outcomes….but uncertainties about this outlook have increased.’

With the Fed now leaning toward rate cuts, this prompted a party in the US equity markets; the S&P 500 closed at a brand-new all-time high on Thursday before pulling back ever so slightly on Friday.

We know the FOMC debates these words carefully and the addition of ‘uncertainties about this outlook have increased’ clearly indicates the Fed’s outlook has recently changed.

In addition to the above, the Fed also released its economic projections for the coming few years. What we see from these projections is that despite the market’s desire for rate cuts, a slim majority at the Fed sees no need to cut rates this year and after that, they only see one rate cut coming next year.

The investment community (ie. Wall Street), however, differs widely in this regard. Recent futures prices are pricing in a rate cut at 100% come next month’s Fed meeting; the odds were 20% a month ago. In addition, the odds of a cut at the following meeting (September) are 87% and some futures traders see a 3rd rate cut coming before the end of 2019.

I agree the Fed now appears to be more open to rate cuts. I am, however, of the opinion the market is overestimating the Fed’s willingness to cut rates once, or even a few times.

I also see the bond market is all on board for rate cuts with the yield on the 10-year Treasury dipping below 2%; this yield is now back to where it was before Trump was elected more than 2.5 years ago. In fact, the yield has dropped 120 bps in the last 7 months.

In my opinion, this means the financial markets are very concerned about the sustainability of the economy. The most interesting part of the yield curve is the area around 2 – 3 years where yields have dropped very low in anticipation of Fed rate cuts. It does not, however, appear investors are expecting a prolonged cycle of lower rates as the yield curve starts to rise after 3 years.

In addition to the above, we have the upcoming Trump and Chinese leader Xi Jinping meeting at the Group of 20 summit in Japan. While Trump stoked expectations for the summit after tweeting on Tuesday about a ‘very good telephone conversation’ with Xi, I am of the opinion China is not about to give in to the US’s demands and the US is not about to give in to China’s demands. I place the odds of a positive outcome from this upcoming meeting at 0%.

In my opinion, current conditions are such that I will continue to patiently wait on the sidelines in the hopes of a nice broad market pullback. Until such time as this happens I will continue to raise additional funds which I can then deploy when I view high quality companies to be more attractively valued.

By Charles Fournier|June 23rd, 2019|General Investing|Comments Off on Why I Am Reluctant to Deploy New Money