On October 23rd I wrote this United Technologies (UTX) article in which I indicated that I decided to acquire another 300 shares @ ~$126 on October 22nd for one of the ‘side accounts’ of the FFJ Portfolio. These shares are in addition to the UTX shares I acquired for undisclosed accounts in mid-April 2008 and all the reinvested dividends.

Now that UTX has released its Q4 and FY2018 results and has provided the investment community with more details regarding the spin-off of Otis and Carrier I am taking this opportunity to revisit UTX.

The Case For Spin-Offs

The heightened level of competition has resulted in the restructuring of many companies. In multiple cases, this restructuring has included corporate spin-offs.

I have reviewed several spin-offs (eg. Synchrony from GE, Zoetis from Pfizer, PayPal from eBay, AbbVie from Abbott Laboratories, Agilent Technologies from Hewlett-Packard) and have found that spin-offs often significantly enhance shareholder wealth.

The list of companies reflected above were mature companies which spun-off subsidiaries whose growth prospects were masked to some extent by the slow growth of the parent company. By ‘creating’ a smaller company through a corporate spin-off, the idea was that the company’s valuation would improve because people in the spun-off company suddenly have powerful incentives to succeed (think stock, deferred share units, and stock options for the senior executives of the spun-off company).

Another reason for spin-offs is that they can help the parent company to focus on the core operations because there is less internal competition for corporate funds.

On a personal note, I have benefited from the spin-off of Broadridge (BR) in 2007 and CDK Global (CDK) in 2014 from Automatic Data Processing (ADP).

I am now hoping that of the spin-off of Otis and Carrier from UTX in 2020 will be just as rewarding.

In my January 30th and October 23rd articles I touched upon the Rockwell Collins acquisition (closed in November 2018) and UTX’s evaluation of strategic options for the company’s future.

On November 27th, UTX announced its intention to separate into 3 separate companies; Otis and Carrier would be spun-off from UTX in 2 separate tax-free transactions for US federal income tax purposes.

A key benefit to be derived from the spin-off of these two entities is flexibility in capital allocation and structure.

One-time costs, particularly in the area of non-US tax expense to effect these transactions, in the range of $2.5 - $3B were expected to be incurred. This range included anticipated one-time costs related to debt refinancing charges and other typical items associated with large portfolio shaping activities across multiple jurisdictions.

The plan is that at separation each business will maintain an investment grade credit rating.

Furthermore, the expectation is that the sum of the 3 companies’ dividend per share at the outset will be no less than UTX’s dividend at the time the spin-offs are completed.

When the spin-off was announced, management indicated that during the 18 – 24 month transition period it was highly unlikely that significant share buybacks would be executed. The focus was to de-leverage the balance sheet in the near term and the long-term objective was to strengthen the aerospace business credit rating (see Credit Ratings section of this article for current ratings).

While smaller scale mergers and acquisitions were not being ruled out, the focus was to de-leverage and sustain shareholder returns.

The spin-offs will be a monumental task in that UTX currently conducts business in multiple jurisdictions throughout the world through ~1,200 different legal entities. In many instances, UTX has aerospace entities holding commercial entities or holding companies with Carrier and Otis operating entities.

The complexity of these spin-offs explains a significant portion of the one-time costs and why UTX initially anticipated that the transition period would be 18 – 24 months.

On the January 23rd conference call with analysts, management indicated that there are currently ~15 separate teams with about 330 people working on the separation process; the number of employees working on this initiative is going to ramp up to ~500 people in the next few months.

Based on the work done over the last 2 months, the separation is expected to be achieved in no more than ~18 months. The focus, however, is to be operationally ready for separation by the end of 2019 which means all the systems and all the processes must be in place to be able to run separate companies at both Otis and Carrier and the remaining UTX. 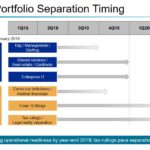 The ultimate timing of the spin-offs will be subject to tax rulings and there are a couple of jurisdictions that have some relatively significant tax costs, absent favorable tax rulings. Since UTX needs to get those tax rulings to minimize the onetime costs, the 18 month timeline starting from the time of the spin-off announcement in November 2018 is why the spin-off is unlikely to be completed until 2020.

The investment community raised questions when the spin-off was announced and the $2.5B - $3B in separation costs was disclosed. Management has now provided more details on this front and has indicated there are 3 significant cost categories.

UTX is also trying to minimize the recurring cost that Otis and Carrier will incur as stand-alone entities. When the spin-off was announced, UTX indicated that negative synergies in the range of $0.35B - $0.45B were anticipated. UTX is currently looking at how to minimize these costs through structural cost-reduction activities.

UTX will also be looking to reduce its own costs post spin-off because ~40% of UTX’s current revenue will disappear one the spin-offs are finalized. More clarity on both the separation costs and the onetime costs will be provided in due course.

Management has indicated that there have been no surprises with respect to this integration.

The teams from both businesses have been able to work on the cost synergy and UTX is now more confident in its ability to deliver ~$0.5B in cost synergies in the first 4 years.

The integration team has also identified some revenue synergies with a real focus on key trends around autonomy, a more electric aircraft, and a more connected aircraft.

The legacy Rockwell Collins business is expected to generate ~$1.4B of free cash flow in 2019 which is in addition to the ~$0.3B cash inflow in December 2018. This is impressive considering that December was historically a period of cash outflow for the legacy business. 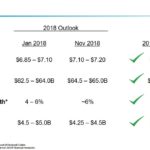 I provide the following FY2017 Overview for comparison purposes. 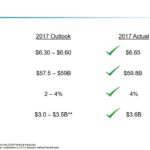 The all important Free Cash Flow metric reflects a $0.8B uptick from that reported in FY2017. 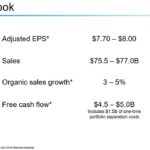 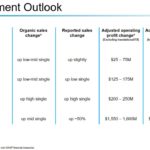 With respect to the 2019 adjusted EPS projection, UTX’s various business segments are expected to add $1.85 of EPS at the midpoint of their outlook range.

Pension will be a $0.08 tailwind with $0.14 being driven from Rockwell Collins.

Tax and minority interest will be a $0.17 headwind.

Interest expense will be a $0.68 headwind, largely driven by nearly 11 months of incremental expense on the $11B of debt incurred for the Rockwell Collins acquisition and the $8B of debt acquired as part of the transaction.

The adjusted effective tax rate in 2019 is expected to be 23% - 24% versus the 22.1% in 2018. This is primarily driven by the full phase-in of the U.S. tax reform for UTX’s international entities and, specifically, the impact of the duty provisions.

Corporate expense, eliminations and other will be a $0.15 headwind. This is largely due to a few onetime gains in 2018 and continued investments in UTX’s digital capabilities.

Higher share count, driven by the Rockwell Collins' acquisition, will be a $0.58 headwind in 2019. UTX now expects the weighted average diluted share count to be around 870 million shares based on the final 2018 ending share count.

Moody’s downgraded UTX’s long-term debt one notch from A3 to Baa1 in August 2018. This rating is the upper tier of the lower medium grade category and is investor grade.

Subsequent to my October 23rd article, S&P Global downgraded UTX’s long-term debt by one notch (A- lowered to BBB+ on November 28th).

Both ratings are comparable and continue to be ‘investment grade’.

Despite these downgrades I am satisfied with the level of risk I am assuming by investing in UTX.

Based on the above I view UTX as being fairly valued.

I always look at the company’s website when conducting my research and today I noticed the dividend history reflected UTX’s quarterly dividends AND it also reflected Rockwell Collin’s quarterly $0.33/share dividend. As a result, the FY2018 total dividend amounted to $4.155/share; I only received $2.835/share in dividends from UTX in 2018.

I contacted UTX’s Investor Relations department and they acknowledged the error. The web page with this erroneous information is to be corrected.

UTX increased its quarterly dividend from $0.70/share to $0.735/share when it declared its December dividend in October 2018.

On this basis I am forecasting three $0.735/share quarterly dividend payments in 2019 (March, June, and September) and am conservatively projecting a 4.0% dividend increase (~$0.765) for the December dividend. This would give us a $2.97/share dividend for 2019. Using the current ~$117 share price we get a forward dividend yield of ~2.54%. This projected dividend yield is superior to that which I calculated in my January 30th and October 23rd 2018 UTX articles.

Despite the jump in UTX’s share price on January 23rd when earnings were released, I view UTX as being fairly valued.

The Rockwell Collins integration is proceeding smoothly and management is confident the synergistic benefits will exceed those projected.

The projected costs associated with the Otis and Carrier spin-offs are certainly significant. I am, however, cautiously optimistic that the benefit to shareholders by way of these spin-offs will, over the long-term, outweigh the one-time spin-off costs.

I do not intend to acquire additional UTX shares as I am comfortable with existing UTX exposure after having purchased additional shares in October.