Union Pacific: Keep This Stock On Your Watch List 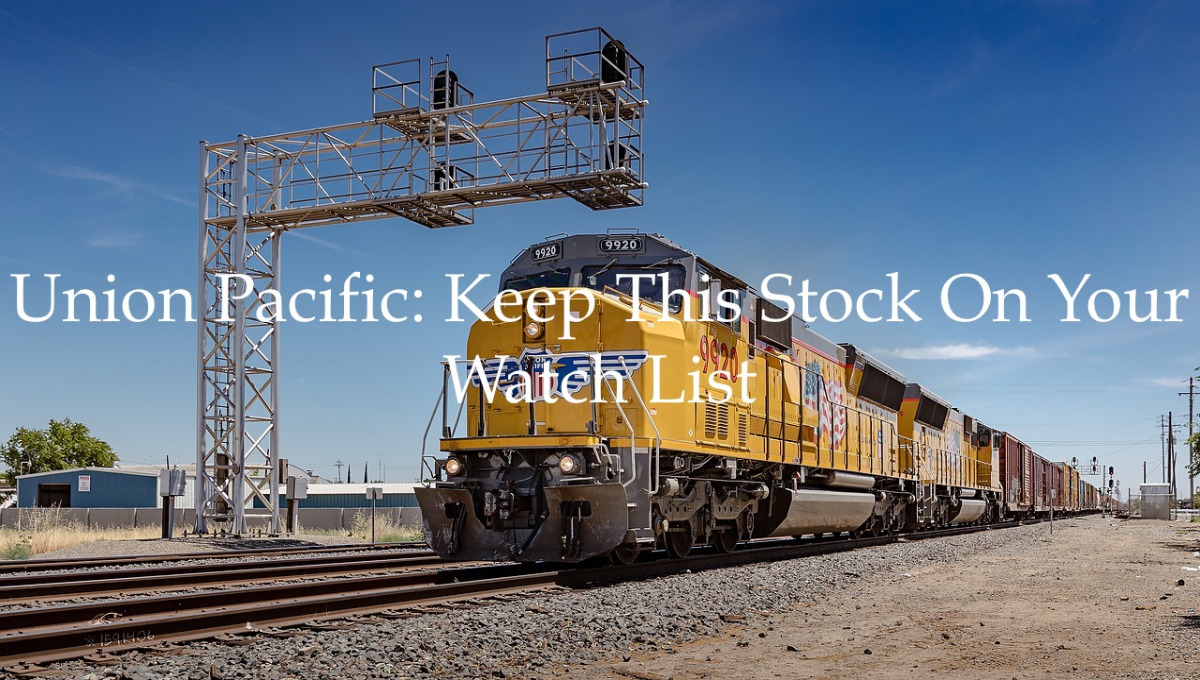 Union Pacific: Keep This Stock On Your Watch List is a Guest Post provided by Dividend Power, a self-taught investor and blogger on dividend growth stocks and financial independence.

I like companies that are in oligopolies where two to three companies dominate the market. Think of AT&T(T), Verizon (VZ), and T-Mobile US (TMUS) in wireless or Coca-Cola (KO), Pepsi (PEP), and Keurig Dr. Pepper (KDP) in soda. Why do I like oligopolies? Well, the companies usually have a wide moat, efficient scale, and growing dividends. This brings us to Union Pacific Corporation (UNP). The railroad company is the largest public railroad in North America. It has few competitors of a similar scale. Furthermore, the barriers to entry for freight railroads are high. The company has paid a growing dividend for 15 years making it a Dividend Contender. That said, Union Pacific is probably overvalued at this point but it is a stock that you should keep on your 'Watch' list.

Union Pacific was founded in 1862. Today, it is the largest public railroad in North America with over 32,000 miles of rail in its network, 7,700 locomotives, and 56,900 freight cars at end of 2020. Most of the network is located in 23 states in the western two-thirds of the U.S. Union Pacific operates in three business groups: Bulk (~32% of total revenue), Industrial (~37% of total revenue), and Premium (~31% of total revenue). The company hauls coal, cars, intermodal containers, agricultural products, chemicals, metals, ore, timber, industrial products, petroleum, etc. Total carloads exceed about 8.3 million annually. Union Pacific owns about 25% of the Mexican railroad, Ferromex. Total revenue was $18.251 billion in 2020. 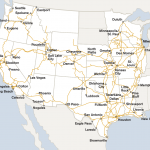 Over the past decade, it has been seemingly difficult for Union Pacific to grow revenue. It has fluctuated between $18.2 billion and $22.7 billion. Furthermore, past industry consolidation and concentration in some markets probably means that an acquisition would have a difficult time passing regulatory scrutiny. 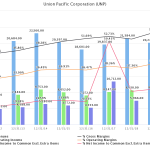 The real story here though is margin expansion, as the railroad leverages its scale and technological advances to raise efficiency. Gross margins, operating margins, and net profit margins are all trending higher for the past decade. The railroad has been able to earn the same revenue but with fewer employees. Union Pacific had almost 45,000 employees at end of 2011 and that number was down to about 31,000 at end of 2020. The railroad is also increasing the length of trains that in turn is increasing locomotive and employee productivity. Maximum train length is up +30% or 2,100 feet since Q4 2018.

Union Pacific had a difficult 2020 as the top line was negatively impacted by the COVID-19 pandemic. This was not surprising as Union Pacific’s revenue and earnings are cyclical and tied to the U.S. economy. The second quarter of 2020 was difficult for many industrial and resources companies’ as they shut down or severely limited operations. In turn, this adversely affected Union Pacific’s volumes. But the railroad believes that key economic indicators are showing a better outlook with growing industrial production, higher light-vehicle sales, more housing starts, and greater consumer spending. This should drive volumes for Union Pacific. On a negative note, coal continues a secular decline as utilities switch to renewable solar and wind, and natural gas at the expense of coal. 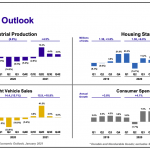 Union Pacific pays a quarterly regular cash dividend of $0.97 per share giving a forward annual dividend of $3.88 per share. The forward annual dividend yield is approximately 1.8%, which is below the trailing 5-year average of 2.2%. Union Pacific’s yield spikes over 3% at times during economic slowdowns or recession. The dividend yield was nearly 3.5% at end of March 2020 and before that, the yield was over 3% in early-2016. 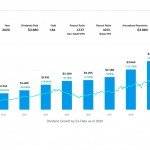 Union Pacific has raised the dividend for 15 years straight making the stock a Dividend Contender. Note that the dividend is growing but the railroad company typically uses more cash flow annually to repurchase shares. For instance, in 2020, Union Pacific bought back $3,705 million in shares but the dividend cost $2,626 million. In 2018, the difference was even starker with $8,225 million used for share repurchases and $2,299 million used for dividends. Returning cash to shareholders is something that most retail investors like to see but Union Pacific is seemingly using debt to repurchase such large quantities of stock. Net debt and the leverage ratio continue to rise while interest coverage trends lower.

From a dividend safety perspective, the dividend is covered by earnings with a forward payout ratio of about 41%. This is a very good value and well below my criterion of 65% for payout ratio. The dividend is also safe based on free cash flow. In the TTM, Union Pacific had an operating cash flow of $8,540 million. Capital expenditures were $2,927 million giving a free cash flow of $5,613 million. The dividend required $2,626 million giving a dividend-to-FCF ratio of roughly 46.8%. This is also a very good value and below my threshold of 70% for this ratio. Importantly, the dividend has not been cut or suspended during the COVID-19 pandemic despite the severe downturn in economic activity in Q2 2020.

The rising net debt and leverage ratio makes Union Pacific’s balance sheet less conservative than I would like. At end of 2020, the company had $1,859 million in cash, equivalents, and short-term investments. Short-term debt was only $960 million but the long-term debt was $25,320 million. The leverage ratio was 2.6X and interest coverage is OK at about 7X.

Union Pacific’s net debt and leverage ratio have been trending up and concurrently interest coverage has been trending down. This debt is seemingly being used at least in part for share repurchases, which is not a good use of debt in my opinion. You can see the trend in net debt below, which has risen dramatically since 2014. At the same time, interest coverage has declined, and the leverage ratio has risen. I like to see the leverage ratio below 2.5X for most dividend growth companies. If leverage becomes too high, then it starts to place the dividend at more risk as interest payments rise. Indeed, Standard & Poor’s lowered Union Pacific’s corporate credit rating by one notch to A- after the railroad announced the $20 billion share buyback in 2018. This trend in rising net debt and leverage ratio largely coincides with the current CEO taking the helm in early-2015. 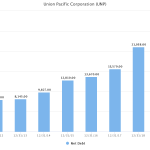 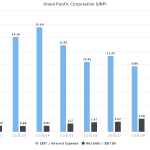 Union Pacific had a challenging 2020 but 2021 should be better with rising vaccine distribution and reopening of the economy. Consensus earnings per share are $9.54 for 2021 giving a forward price-to-earnings ratio of 22.5X, which is below the average of the S&P500. However, the stock is clearly overvalued based on trailing averages for earnings multiple.

The trailing earnings multiple over the past 5-years has been right about 21.7X and for the past decade at about 19X. We will use 20X as the earnings multiple to be conservative but account for rising margins and determine a fair value of $190.8. Applying a sensitivity analysis using P/E ratios between 19.0 and 21.0, I obtain a fair value range from $181.26 to $200.34. The current stock price is ~107% to ~118% of my estimated fair value. The current stock price is ~$214.09 suggesting that the stock is likely overvalued at this time based on earnings. 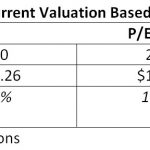 There is a lot to like regarding Union Pacific. The railroad has a wide moat with high barriers to entry. It would be very difficult for a new entrant or even an existing competitor to build a rail network that matches that of Union Pacific. In fact, most customers are probably serviced by one or two railroads. That said, growth is probably difficult to come by due to past industry consolidation and focus on organic growth and extracting out efficiencies.

I do like the 15 years of dividend growth, but I am concerned about the rising net debt and leverage ratio. Currently, debt seems manageable, but it bears watching since the leverage ratio is trending higher. Union Pacific could be a nice addition to a dividend growth stock portfolio at the right price. Unfortunately, Union Pacific is trading above both the 5-year and 10-year trailing average price-to-earnings ratios and the yield is below the trailing 5-year average.  At this point, investors should keep Union Pacific on their 'Watch' list.

Author bio: Dividend Power is a self-taught investor and blogger on dividend growth stocks and financial independence. Some of his writings can be found on Seeking Alpha, TalkMarkets, ValueWalk, The Money Show, Forbes, Yahoo Finance, and leading financial blogs. He also works as a part-time freelance equity analyst with a leading newsletter on dividend stocks. He was recently in the top 6% out of over 7,966 financial bloggers as tracked by TipRanks (an independent analyst tracking site) for his articles on Seeking Alpha.

By Charles Fournier|March 14th, 2021|Equity Investing, Guest Posts|Comments Off on Union Pacific: Keep This Stock On Your Watch List