On June 12, 2017 I wrote a post about our less than stellar success with Manulife Financial Corporation (NYSE: MFC). Today’s post is about Sun Life Financial Inc (NYSE: SLF), our other major Canadian life insurance company investment. Included in this post will be a comparison of just a few metrics for both companies followed by my opinion as to which of the two is my preferred choice from an investment perspective.

In 1865, Sun Life received assent from the Legislative Assembly of the Province of Canada (remember this was before Canada became a country!) to incorporate a company to conduct the business of insurance. Further details on Sun Life’s history can be found here.

In 2000, Sun Life demutualized and shares of Sun Life Financial Inc. began trading on March 23 on the Toronto (TSX), New York (NYSE) and Philippine (PSE) stock exchanges; over one million eligible policyholders around the world received demutualization benefits.  Demutualization is the process of converting a mutual life insurance company, owned by its policyholders, to a publicly traded stock company owned by shareholders, pursuant to a plan of conversion approved by government regulators.

The amount paid to each policyholder is based on a number of factors including:

In December 2001, Sun Life Financial and Clarica Life Insurance Company announced an agreement to combine operations.  The merger was completed in 2002 and by the end of 2003, the operations were fully integrated.

SLF’s margins have been under pressure in recent years, and mortality and morbidity rates have been a consistent challenge. In addition, SLF has also experienced uneven results from its investment holdings. The following image provides a high level overview of the allocation of invested assets as well as credit quality of the portfolio. 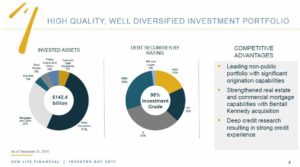 While the Asian and U.S. businesses are improving, the core Canadian business has shown declines in life insurance sales.

SLF’s strategy is focused on four key pillars of growth or where it aims to be a leader in the markets in which it operates. 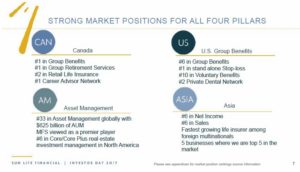 Details of SLF’s progress in these four key pillars for future growth can be found on pages 15 and 16 of SLF’s 176 page 2016 Annual Report. 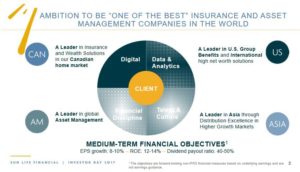 SLF - Ambition to Be One of the Best

The medium-term financial objective of 8 – 10% EPS growth is expected to be attained through the following key drivers. 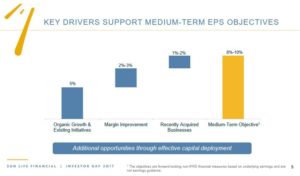 In addition, SLF plans to grow its underlying net income through business and geographic diversification. 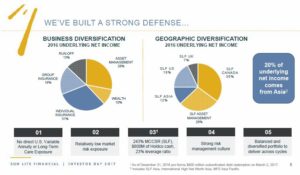 The nature of a life insurance company is such that is collects premiums in the short-term which can then be invested to cover potential obligations at a later date. It is up to the insurance company to try to generate a reasonable yield on this float while ensuring risk is properly hedged/mitigated.

If SLF benefits from float, one would naturally expect a rising interest rate environment to bode well for insurance companies. I suspect the Fed’s recently announced rate hike, however, is not going to impact SLF’s earnings to the extent some investors anticipate. Judging from SLF’s March 2017 Investor Day presentation, it appears SLF is also tempering expectations as to the impact a rising short-term interest rate environment will have on earnings since returns on invested funds are not influenced solely by interest rates. 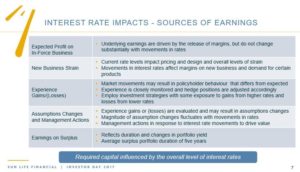 While SLF’s President and CEO is also on this list, he has ranked well below MFC’s CEO from a compensation perspective.

I recognize CEO compensation is a contentious point with many investors but the magnitude of the CEO’s compensation at both SLF and MFC is really irrelevant in the grand scheme of things. I would not, therefore, let this factor influence your investment decision.

Metrics Comparison between SLF and MFC

The minimum continuing capital and surplus requirements (MCCSR) guideline is a ratio that indicates a long-term ability to pay insurance claims (the higher the ratio is better).  This capital ratio is set by the Office of the Superintendent of Financial Institutions (OSFI) and the MCCSR must be at least 120%, with a target of at least 150%. 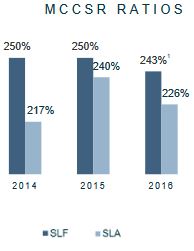 Both SLF and MFC have strong Risk Management Policies and Procedures. This, however, was not always the case with MFC. Here are a couple of very interesting articles in The Financial Post and The Globe and Mail which provide a high level overview of why things went horribly wrong with MFC when the Financial Crisis hit.

Result: TIE now that MFC has made change to its Risk Management Policies and Procedures.

Purely from a selfish standpoint...we have various insurance policies underwriting by both companies. Other than making claims under the dental and medical insurance policies, I hope we never have to make a claim for many, many more years. I am also confident both companies will still be around and of decent credit quality when the time does come to make a claim(s) under those “other” policies.

MFC has a slightly higher compound annual dividend growth rate than SLF subsequent to both becoming publicly traded entities. I also decided to isolate my calculation from the time the Financial Crisis started in 2007. The results can be found below. 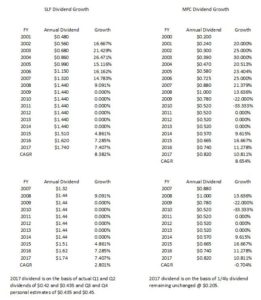 Both SLF and MFC have a relatively weak compound annual dividend growth rate over the past decade but SLF’s record is slightly better so SLF squeaks by in this metric.

I reference the following tables of key ratios obtained from Morningstar (SLF and MFC). SLF comes out ahead in the Operating Margin, EPS, and Dividend Payout Ratio categories while MFC comes out slightly ahead in the FCF/share category. I say slightly because while MFC’s FCF/share is higher, it is more volatile than that of SLF; SLF’s ratio is gradually trending up while that for MFC is inconsistent. 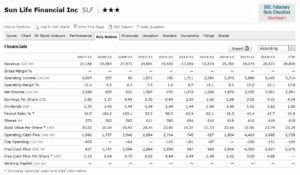 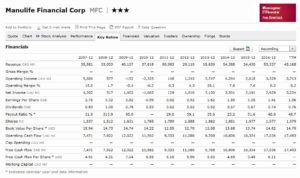 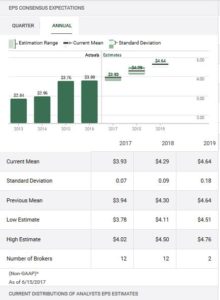 MFC wins in this category given its current slightly lower PE level.

Immediately subsequent to the November 2016 US Presidential election, investors boosted SLF’s stock price to just under $54. I suspect investors were cautiously optimistic that decreased financial regulation and lower taxes would come about which would help boost SLF’s US business.

As the business community began to question the direction of the new US government, the optimism surrounding campaign promises started to wane. SLF’s stock price has now retraced to ~$45 which was the level just prior to the US election! On the other hand, MFC’s stock price is up ~$4 subsequent to the US Presidential election so it is not as much of a bargain as it was late Summer of 2016.

As you can see, share repurchases constituted a small percentage of SLF’s overall capital deployment during the 2014 – 2016 timeframe. With the recent retracement in stock price to the ~$45 level I would have thought that SLF’s management might consider stock buybacks. Management has recently reiterated, however, that it will not be making any significant share repurchases as they view reinvestment in the business, increasing dividends, and acquisitions to be a better use of funds. 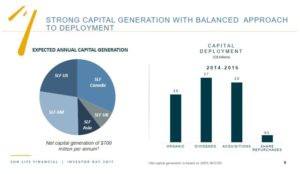 When I acquired shares in SLF, I took into consideration all our investments held in multiple investment accounts. I was looking to invest in a company that would be more of a “steady as she goes” type of investment with a moderate level of potential capital appreciation and a steadily increasing stream of dividends. The steadily increasing stream of dividends aspect of our SLF investment certainly did not pan out as planned but, nevertheless, I opted not to liquidate our SLF shares. Instead, I acquired more shares when SLF’s stock price was depressed. That decision has certainly helped improve our overall return on our SLF investment.

If you are looking for an investment that has the potential to produce a moderate level of capital appreciation and provide you with an acceptable dividend yield (I don’t envision another dividend freeze) you may wish to consider investing in SLF as opposed to MFC. Just temper your expectations. This is a life insurance company so capital growth will likely be muted.

I also suspect that we are in the late innings of the bull market. This long economic expansion is now into year nine and is the third longest business expansion since the end of the US Civil War. Typically, expansion ends from a Fed tightening cycle.

I will not be acquiring additional SLF shares as we already have a full position.

Disclosure: At the time of writing this post I am long SLF and MFC.