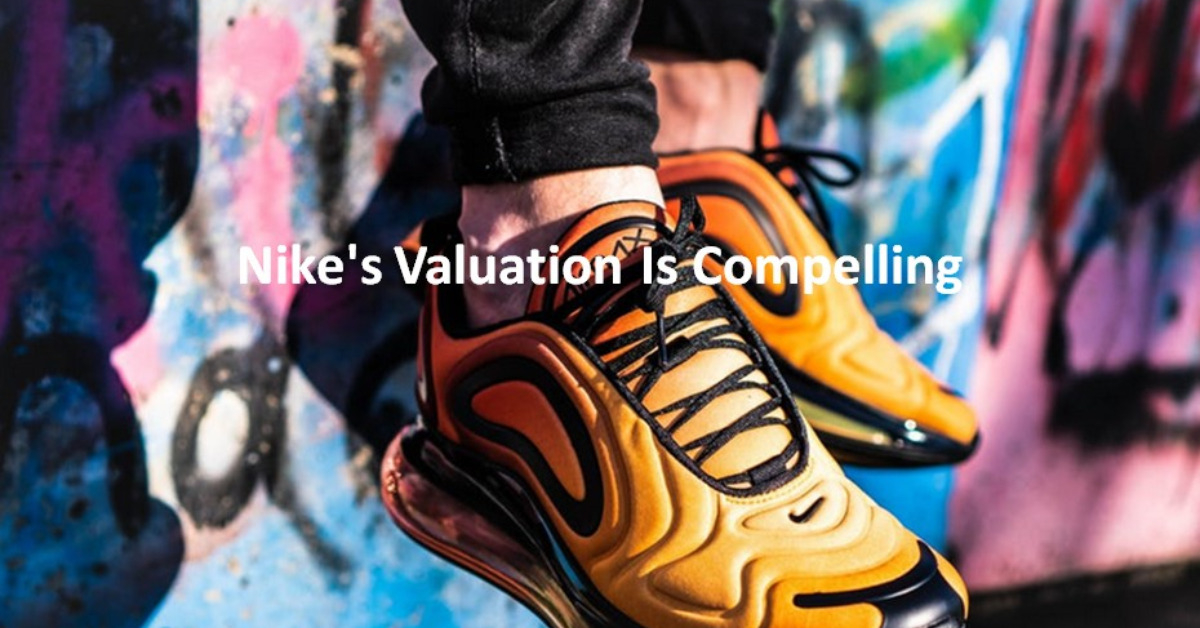 I continually look to add to positions and last reviewed Nike (NKE) at which time I concluded shares were overvalued. After that post, global economic conditions significantly changed. This has led to a decline in the share price of many of my existing holdings; NKE is one such company.

While I welcome a drop in a company's share price, it is important not to overlook a company's valuation. It defies common sense to invest in a company simply because its share price has declined. This, however, is the way investors who merely look at stock charts end up making investment decisions.

There is currently a plethora of companies whose stock price has plunged from their 52-week high. The underlying fundamentals of many of these companies, however, are extremely weak. Oftentimes, companies rated by the major credit rating agencies have credit ratings several tiers below the weakest investment grade. Furthermore, many business concepts make absolutely no sense. One such company is Carvana. Not only does this company's business model make no sense but it also has a majority owner with a criminal history. Just because Carvana's stock price has plunged from its 52-week high is absolutely no reason to invest in the company. While I use Carvana as an example, there are many companies from which investors should steer clear.

NKE, however, is unlike these highly suspect companies. It is fundamentally sound and despite several headwinds, it continues to generate billions in profit and free cash flow.

I recognize some investors invested near the ~$179 52-week high and might question whether NKE is a good investment. While this may be counterintuitive for some investors, it might be a good time to consider 'averaging down' by acquiring shares at the current ~$101 level.

Let's have a quick look at why.

Two years ago, NKE introduced a new phase of its strategy - Consumer Direct Acceleration. In the early months of the pandemic, NKE looked beyond navigating through short-term volatility and outlined a clear vision to pursue even further competitive separation by expanding its digital advantage, reshaping the marketplace of the future, and creating deeper, more direct consumer relationships.

This consumer-led digital transformation is driving long-term growth and value. NKE's digital business, representing over $10B in revenue, is more than double in size versus pre-pandemic levels. After increasing market share and gaining 3 percentage points from the prior year, NIKE Digital now represents 24% of total brand revenue.

Perhaps one of NKE's greatest strengths is its unrivalled global portfolio. Combined, NIKE, Jordan and Converse, represent 3 of the world's most connected consumer brands with a significant presence across sports and lifestyle markets, footwear and apparel, multiple price points, and across several countries.

The Jordan brand, for example, now generates ~$5B in revenue with FY2022 having been Jordan's best year.

NKE's most recent results are accessible in this Earnings Release.

In Q4, NKE's revenue declined 1% and grew 3% on a currency-neutral basis. This was led by 11% growth in NIKE Direct, offset by a 3% decline in wholesale. NIKE Digital grew by 18%.

The effective tax rate for Q4 was negative 4.7%. This was due to a shift in earnings mix and a one-time non-cash benefit related to the onshoring of NKE's non-U.S. intangible property.

Diluted EPS of $0.90 in Q4 includes a $0.10 nonrecurring noncash charge related to the deconsolidation of NKE's Russian operations as well as the transition of its Argentina, Chile and Uruguay businesses to a strategic distributor model.

Inventory of $8.4B, up 23% compared to the prior year period, was driven by extended lead times from ongoing supply chain disruptions. Elevated ocean freight and logistics costs continue to dampen near-term profitability but this challenge is not unique to NKE. Similar headwinds are common amongst many of the companies I follow.

In Q4, NKE also experienced challenges in Greater China. Revenue declined 20% on a currency-neutral basis and EBIT declined 55% on a reported basis. This follows the region's most widespread COVID disruption since 2020, impacting over 100 cities and over 60% of NKE's business.

With the lifting of lockdowns in specific trade zones in late April, May and early June, NKE saw improved store traffic and overall consumer demand. While there may be a near-term risk of further COVID disruption, longer term, NKE is encouraged by another quarter of brand momentum in the marketplace.

NKE is closely monitoring consumer behaviour and the implications of high inflation on near-term economic growth and consumer demand. In addition, it is taking a cautious approach to Greater China, given the uncertainty around additional COVID disruptions.

As such, various risk scenarios are factored into FY2023 guidance.

Revenue: low double-digit growth on a currency-neutral basis, partially offset by foreign exchange headwinds of ~400 bps. In Q1, NKE expects real dollar revenue growth to be flat to slightly up versus the prior year due to COVID disruption in Greater China and a more than 500 bps impact from foreign exchange translation.

Gross margin: flat to declining by 50 bps versus FY2022 with a wider-than-usual range.

NKE expects to benefit from mid-single-digit pricing actions and continued gains from its shift to a more direct business. This, however, will be partially offset by another 100 bps headwind from elevated ocean freight costs, increased product costs, discrete supply chain investments and normalization of historically low markdown rates.

Foreign exchange is expected to be a 30 bps headwind on gross margin due to the strength in the U.S. dollar. This will be largely offset in FY2023 by favourable hedge rates versus current spot rates.

Gross margin pressure is expected to exceed 100 bps in Q1. This is the result of a recalibration of supply and demand in Greater China and anticipated higher promotional activity to sell seasonal inventory, which arrived late due to a combination of factory closures and longer transit times.

SG&A is expected to increase by high single digits to low double digits.

Moody's rating defines NKE as having a STRONG capacity to meet its financial commitments. It is, however, somewhat more susceptible to the adverse effects of changes in circumstances and economic conditions than obligors in higher-rated categories.

S&P's rating defines NKE as having a VERY STRONG capacity to meet its financial commitments with its rating differing from the highest-rated obligors only to a small degree.

NKE has increased its dividend payouts for 20 consecutive years.

With shares now trading at ~$101, the dividend yield is ~1.2%. Investors should also consider that NKE distributed its 3rd consecutive $0.305 quarterly dividend on July 1, 2022.

Looking at NKE's recent dividend increases, it is not unreasonable to envision NKE will announce in early December a ~$0.03 increase to its quarterly dividend. If this materializes, then the four next quarterly dividends will amount to ~$1.31 ($0.305 + ($0.335 x3)). Using the current ~$101 share price, the forward dividend yield would be ~1.3%.

Investors would be wise to focus on an investment's potential overall return and not just a company's potential dividend return. The vast majority of NKE's investment return is most likely to continue to be generated by way of capital gains. Given this, it becomes increasingly important not to overpay to acquire NKE shares.

NKE has been a prolific buyer of its issued and outstanding shares.

In June 2022, NKE's Board authorized a new four-year, $18B share repurchase program. The current $15B program terminates in FY2023 and this new program replaces it.

When I wrote my March 22 post, NKE shares were trading at ~$133. Adjusted diluted EPS estimates from all the brokers which cover NKE had yet to be provided but using what was available, these were the valuations based on what was currently available.

Shares are now trading at ~$101 and these are the current valuations based on adjusted diluted earnings estimates.

I view NKE's valuation based on current forward-adjusted diluted earnings estimates to be very compelling. While NKE will likely continue to experienced short-term headwinds, it is adapting to the challenging business conditions and I envision strong results going forward.

If management were concerned about the company's future, I do not think it would have announced an $18B share repurchase program.

I currently hold NKE shares in a 'Core' account within the FFJ Portfolio. In my recent Mid 2022 Investment Holdings Review, NKE had fallen out of my top 30 holdings.

I am helping a young investor on their journey to financial freedom and we have acquired additional shares @ ~$101; I do not disclose details of these holdings.

I wish you much success on your journey to financial freedom!

Disclaimer: I do not know your circumstances and do not provide individualized advice or recommendations. I encourage you to make investment decisions by conducting your own research and due diligence. Consult your financial advisor about your specific situation.

By Charles Fournier|July 5th, 2022|Equity Investing|Comments Off on Nike’s Valuation Is Compelling