Nike, Inc. Stock Analysis – I See a Lot To Like Despite Margin Compression

On Nike’s (NYSE: NKE) March 21, 2017 conference call, management indicated consumers are using digital technology as the foundation of their shopping experience. This is having a pronounced impact on consumer patterns, especially in North America, as the economics of brick-and-mortar retail is dramatically different from just a few years ago.

While NKE recognizes this is creating significant challenges, it views them as a tremendous opportunity. Brands that will dominate going forward will be those which capitalize on the proper use of technology and which lead with service.

In this regard, NKE is driving fundamental change in 3 core areas of its business through its “Triple Double” initiative:

While historically successful in all 3 core areas, NKE has committed to doubling its impact in each area.

Further details on the Triple Double initiative can be found in the Chairman, CEO, and President’s comments in the Q3 2017 conference call transcript.

The following is a very high level recap of NKE’s Q3 and YTD 2017 results.

Despite NKE’s impressive results, many investors have opted to focus on the following negative data and have suggested that NKE is faltering.

Why I am not Concerned

NKE is a behemoth. It is virtually impossible to make immediate dramatic changes to a business of this size. Management readily acknowledges there are headwinds but they are taking appropriate measures to adapt to changes in the marketplace.

What a pristine Balance Sheet! It is a welcome change to see a Balance Sheet that has negligible values associated with “fluff” line items (ie. Goodwill and Identifiable Intangible Assets).

As at the end of Q3 2017, NKE had enough Cash and Equivalents and Short -Term Investments to completely wipe out its Short-Term Liabilities.

The challenge NKE is facing relative to consumer purchasing habits is not unique to them.  Its competitors face the same predicament. At least NKE has far greater resources at its disposal to address these challenges relative to most, if not all, its competitors.

NKE appears to be wisely repurchasing shares at reasonable valuations. An increase in NKE’s stock price will not help. Existing shareholders should wish for continued pressure on NKE’s share value.

Multiple analysts are projecting FY2017 EPS of ~2.39. Using the PE reflected above, I get a fair value of ~$55.7. Anyone buying NKE at this level is certainly not getting a bargain but at the same time is not grossly overpaying. 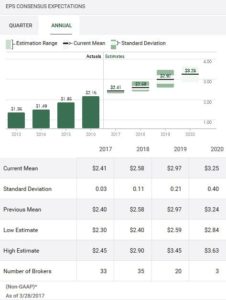 NKE’s is not for dividend yield hungry investors (although I will gladly accept receipt of our NKE dividend on April 3, 2017)! Its current quarterly dividend is $0.18, which, based on a closing price of $55.73, represents a yield of 1.3%. Despite this low dividend yield, I am a firm believer Low or No Dividend Yield Companies Belong in Your Portfolio.

It is always disconcerting to see deterioration in profit margins but one must remember that business results do not improve in perpetuity. NKE and its competitors are facing a radical shift in the way many end consumers purchase products and services. At least NKE recognizes the challenges and is taking appropriate steps.

I acquired NKE shares for the FFJ Portfolio because its balance sheet is like a fortress, it is immensely profitable, and it generates a ton of FCF. I see no reason for concern at this stage.

While NKE is certainly not valued as attractively as when I purchased shares, I don’t think an investor with a long-term investment horizon could go wrong acquiring shares at current levels. Having said this, I am cautiously optimistic there will be a major pullback given that we have not experienced a correction of any significance in several years. Should one occur, I would very likely add to our existing NKE holdings.

By Charles Fournier|April 2nd, 2017|Equity Investing|Comments Off on Nike, Inc. Stock Analysis – I See a Lot To Like Despite Margin Compression