Moody’s Corporation – Patiently Waiting for a Pullback in Price

This article is the first of two articles on the largest publicly traded credit rating agencies in North America.

As part of this ongoing process to scout for attractive long-term investment opportunities, it dawned on me that whenever I analyze a company I check the credit ratings assigned by the ratings agencies. Given the important role ratings agencies play I am undertaking this review to determine whether Moody’s Corporation (NYSE: MCO) would be a suitable addition to our investment holdings.

In reviewing the US Securities and Exchange Commission (‘Commission’) EDGAR database, I note that Berkshire Hathaway (NYSE: BRK.b) has held a position in MCO as far back as 2000 which is when Dun & Bradstreet split into 2 companies and took Moody’s public;  BRK.b’s exposure to MCO has increased over  the years.

Since Messrs. Buffett and Munger are sufficiently comfortable that MCO represents a great long-term investment despite the debacle it experienced as a result of its failure to forewarn investors of the risks which led to the Financial Crisis, I am comfortable in taking a position in MCO. The matter at hand is to determine a reasonable entry level.

Most investors are familiar with MCO and perhaps a few of the other 10 statistical rating organizations (“NRSROs”) the Commission recognizes; NRSROs are organizations that provide an assessment of the creditworthiness of a company or a financial instrument.

The NRSROs were recognized by the Commission through a no-action letter process until 2006 at which time Congress passed the Credit Rating Agency Reform Act (the “Reform Act”). This act added Section 15E to the Securities Exchange Act of 1934 (the “Exchange Act”) and provided the Commission with the authority to establish a registration and oversight program for credit rating agencies registered as NRSROs.

The failure of the ratings agencies to properly rate multiple financial institutions and financial instruments prior to the Financial Crisis resulted in Congress passing the Dodd-Frank Wall Street Reform and Consumer Protection Act in 2010. This Act enhanced the Commission’s oversight of the regulation of NRSROs. Through a series of rulemakings, the Commission has implemented a number of Exchange Act provisions related to NRSROs.

The credit rating agencies are essentially an oligopoly in which issuers, who want investors to acquire their debt, pay these agencies’ wages. The irony of the credit ratings process was not lost on The Financial Crisis Inquiry Commission. In its January 2011 report, the Commission noted that in order to secure favorable credit ratings from the NRSROs so as to be able to sell structured products to investors, the investment banks were paying significant fees to the rating agencies to obtain the desired ratings. In the run up to the Financial Crisis, investment banks were actually shopping around to see which agency would provide the best rating for investment vehicles.

As we have come to learn, the NRSROs were asleep at the switch prior to the Financial Crisis and many investors who relied heavily on the ratings assigned to borrowers and financial instruments suffered very heavy losses.

I distinctly remember Enron products were rated investment-grade just a few days before it failed. Even Fannie Mae and Freddie Mac had highly rated financial instruments up until mid-2008! Some of you may also recollect that AIG (the insurance behemoth at the time) had entered into credit default swaps to insure $441B of AAA-rated securities on the London market. Very shortly after this transpired, AIG had to be bailed out!

MCO was probably the worst offender amongst the ratings agencies just prior to the Financial Crisis in that it rated nearly 45,000 securities as AAA. Of all the securities which received the coveted AAA rating in 2006, 83% were ultimately downgraded.

In my opinion, a combination of pressure from financial firms that paid the ratings agencies for the ratings, the absence of meaningful public oversight, the lack of proper resources, and the relentless drive for market share all contributed to investors losing a staggering amount of money.

In early 2017, MCO agreed to pay ~$0.8638B to resolve a multi-year investigation into credit ratings which had been assigned to subprime mortgage securities. It paid ~$0.4375B to the justice department and $0.4263B to 21 states, the District of Columbia, and Washington, DC. This settlement was similar to that negotiated by SPGI which paid $1.375B in penalties in 2015.

In addition to this financial penalty, MCO agreed to measures designed to ensure the integrity of future credit ratings going forward, including keeping analytic employees out of commercial-related discussions.

On February 28, 2018 at MCO’s Investor Day, MCO’s President and CEO highlighted the following key factors that are shaping the company’s vision and strategy. 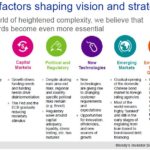 Secular trends such as global GDP growth and the disintermediation of credit markets in developed and emerging economies are expected to provide MCO with long-term growth opportunities. 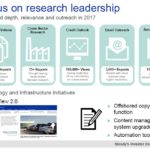 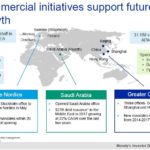 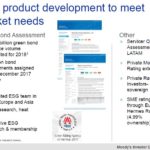 During the presentation, management stressed that MCO will continue to pursue bolt-on acquisitions. In FY2017, for example, MCO completed the $3.27B acquisition of Bureau van Dijk, a global provider of business intelligence and company information based in Amsterdam. Bureau van Dijk aggregates, standardizes and distributes one of the world’s most extensive private company datasets, with coverage exceeding 220 million companies and partnerships with more than 160 independent information providers.

The Bureau van Dijk acquisition certainly bumped up MCO’s total debt ($5.5405B as at FYE2017 versus $3.363B as at FYE2016).  Management, however, fully expects the combined entity to generate immediate synergies of ~$0.045B immediately with this number reaching ~$0.08B by 2021. The acquisition is also expected to increase revenue and EPS growth rates to the high single digits.

While growth opportunities exist, MCO also faces numerous risks. Should economic growth slow and/or should interest rates rise, there is the possibility the demand for corporate debt and ratings may slow from that evidenced in 2017 as many issuers took advantage of attractive rates and tight spreads in 2017.

Impact of the Tax Cuts and Jobs Act (TCJ) on MCO 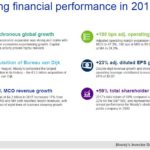 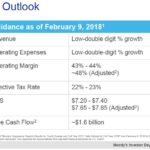 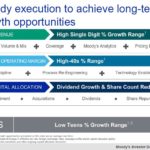 On December 31, 2017, MCO had $5.5B of outstanding debt and $0.870B of additional borrowing capacity under its revolving credit facility.

The majority of MCO’s credit ratings assigned by SPGI and Fitch are BBB+; this is a lower medium grade credit rating.

MCO’s dividend history can be found here; MCO returned ~$0.2904B to shareholders via dividend payments during 2017.

Investors focused on equities with attractive dividend yields will likely rule out MCO as a potential investment given that its dividend yield is typically sub 1.5%.

MCO’s annual dividend growth subsequent to 2001 has been inconsistent as evidenced by the following two charts. The compound annual growth rate over the two timeframes analyzed, however, has been respectable. 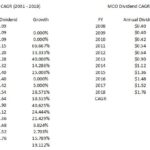 I like that MCO provides critical services to the investment community. Secondly, the fact MCO and SPGI are the leaders in their industry greatly appeals to me.

Yield hungry investors will likely have no interest in MCO. Furthermore, some investors will automatically rule out MCO as a potential investment since it has not consistently raised its dividend every year since becoming a publicly traded company in 2000. Neither of these two factors are deal breakers from my perspective. I seek companies with competitive advantages and look for overall potential returns (dividends and capital gains) as opposed to just growth in dividend income; despite the YoY volatility in MCO’s dividend, MCO has an attractive long-term compound annual dividend growth rate.

An added bonus is that management is prepared to repurchase outstanding shares when the stock price is attractive; the weighted average number of diluted shares outstanding has been reduced by almost 98 million since FY2006.

While there are risks associated with an investment in MCO, I take some comfort in that additional oversight authority was granted to the US Securities and Exchange Commission in recent years. I am also confident MCO’s management is well aware of the potentially irreparable damage to MCO’s reputation if another debacle were to occur; I am confident that systems, procedures, and processes are now in place to avoid another major blunder.

I fully intend to initiate a position in MCO but will patiently wait for a ~$148 or lower entry price. This would be a pullback of ~10% which I am cautiously optimistic will occur in 2018.

Disclosure: I do not currently hold a position in any company referenced herein and do not intend to initiate a position within the next 72 hours.

By Charles|March 3rd, 2018|Equity Investing|Comments Off on Moody’s Corporation – Patiently Waiting for a Pullback in Price