Goldman Sachs – Buy When Great Companies Are Beaten Up

Goldman Sachs' (GS) share price has taken a severe pounding subsequent to the revelation of the Malaysia 1MDB corruption scandal.

I strongly suspect GS's stock price will experience some volatility in the short-term but the shares appear to be attractively valued to the extent where I am prepared to initiate a position for the FFJ Portfolio.

One of Warren Buffett’s investment related quotes that resonates with me is that it is wise to be “Fearful when others are greedy and greedy when others are fearful.” To follow this investment philosophy requires one to take somewhat of a contrarian view.

This brings us to the matter of Goldman Sachs (GS), one of the leading investment banking, securities, and investment management companies throughout the world.

Near the end of January 2018, after GS released its FYE2017 results on January 17, 2018, I looked at GS as a potential investment. Based on my analysis I could not justify GS’s valuation and placed GS on my ‘not now but maybe one day’ list of potential investments.

Fast forward several months and we see that GS’s stock price has been hammered having retraced ~26.6% from its 52-week high. Look closely at GS’s stock chart you will see that the share price has retraced ~$30 in just over a week.

I can certainly appreciate how many GS shareholders may not be pleased given that GS repurchased:

Given that GS is currently trading a $202.12 it is readily apparent this year’s share repurchases were not made at an opportune time.

Investors familiar with GS are aware that David Solomon, who previously served as president of the company and co-head of its investment banking division, has very recently assumed the role of CEO from Lloyd Blankfein. Blankfein, who had served as CEO since 2006, will stay on as chairman through the end of the year.

As CEO, Solomon will need to address the deterioration in GS’s trading desk business; this business collects client fees to buy and sell stocks, bonds, commodities and currencies.

Back in FY2012, this business unit generated more than half of GS’s revenue. In FY2017, this had shrunk to just over 1/3rd as a calm market and low interest rates pushed investors toward lower-fee index funds and passive funds.

While GS’s trading business has recently shown some resilience, revenue was generated predominantly from bond, currency and commodities trading while revenue from equities stayed stagnant.

As GS’s new leader, Solomon has indicated there will be changes. These include:

In addition to the above, since trading has become a less reliable source of income over the years, GS released a plan in September 2017 to boost revenue by $5B by 2020, in part by bulking up other parts of the company. 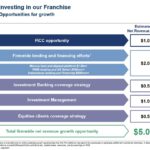 As part of this plan, GS has doubled down on Marcus, its consumer arm, which it established in the US in 2016 and subsequently in the UK; Marcus may expand into life insurance, mortgages, auto loans and wealth management services down the road.

Recent results indicate GS is tracking ahead of its goal to generate $5B in additional annual revenue by 2020 as growth initiatives are bearing positive results. The revenue-boosting plan introduced in 2017 has generated $2.5B YTD2018.

GS’s stock price has taken a severe recent hit after it was disclosed that GS has been under scrutiny for its role in helping raise funds through bond offerings for 1Malaysia Development Bhd (1MDB); 1MDB is the subject of corruption and money-laundering investigations in at least six countries.

The U.S. Department of Justice has said ~$4.5B was misappropriated from 1MDB by high-level officials of the fund and their associates from 2009 through 2014; GS helped raise some of these funds.

In fact, U.S. prosecutors filed criminal charges against two former GS bankers in early November 2018 and one of these former employees has pleaded guilty to conspiracy to launder money and conspiracy to violate the Foreign Corrupt Practices Act.

This is certainly not a matter to be taken lightly but I do not view the acts of a couple of rogue employees as any indication of a systemic issue within GS. If I thought this was a systemic issue I would not even consider analyzing the company to determine whether it would be a suitable addition to the FFJ Portfolio.

I suspect GS will face severe penalties as a result of the above noted corruption scandal but I don’t think this will result in the demise of GS. In addition, I also take comfort that BRK recently significantly increased its GS holdings.

You may remember that in late 2008, GS and Berkshire Hathaway reached an agreement in which BRK purchased $5B of GS preferred stock yielding 10%. BRK also received warrants to purchase $5B of common stock with a strike price of $115/share; BRK had 5 years in which to exercise the warrants.

This transaction was extremely lucrative for BRK!

Interestingly, here we are 10 years later and BRK still remains a GS shareholder. In fact, a review of BRK’s recent 13-F filings shows that after having held ~10,960 million GS shares for many quarters, BRK has recently been increasing its GS holdings. In the June 30 13-F filing, it was disclosed that BRK held ~13.255 million GS shares. In the recently released November 13-F filing I see that BRK has increased its position to ~18.354 million shares.

Disclosure: I am long BRK-b. I do not currently hold a position in GS but intend to initiate a position within the next 72 hours.

By Charles Fournier|November 18th, 2018|General Investing|Comments Off on Goldman Sachs – Buy When Great Companies Are Beaten Up