Genuine Parts Company (GPC) has increased its dividend for 63 consecutive years. This article looks at valuation based on FY2018 results and FY2019 guidance.

I initiated a 300 share position in Genuine Parts Company (GPC) on July 24, 2017 for the FFJ Portfolio and have subsequently been reinvesting all dividends.

GPC is currently not within my top 30 holdings and is unlikely to enter that group but I nevertheless view it as a long-term investment.

In my April 19, 2018 article I wrote that the ~18% pullback in the stock price subsequent to its late January 2018 high should be viewed as an opportunity to acquire shares in this company at a more reasonable valuation.

When I wrote my July 20, 2018 article, I no longer viewed GPC as being as attractive as 3 months prior. I was, however, of the opinion that shares were still reasonably valued based on the company’s growth opportunities.

At the time of that July article, management indicated it was still continuing to work toward the closing of its definitive agreement to merge S.P. Richards with Essendant. Following GPC’s announcement, however, Staples (owned by Sycamore Partners) stepped into the picture with an offer of its own for Essendant shareholder consideration.

Long story short, an affiliate of Sycamore Partners acquired Essendant. Staples, a Sycamore portfolio company and the world’s largest workplace solutions provider, will work together with Essendant to give reseller customers access to an expanded product assortment, innovative technology and world-class supply chain capabilities and support. Essendant and Staples’ sales teams will continue to operate separately.

So here we are, roughly 10 months following GPC’s April 12, 2018 Press Release and GPC is still stuck with S. P. Richards. In my opinion, S. P. Richards adds little value to GPC and I certainly hope it can be spun off sooner rather than later.

Despite GPC’s lack of success in spinning off S.P. Richards, GPC has been active on the acquisition front having announced various bolt-on acquisitions in 2018 and 2019 to expand its Automotive and Industrial segments.

As you can see from the following image extracted from GPC’s Investor Presentation, the company is a serial acquirer. 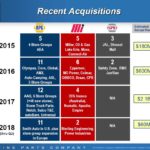 I pay close attention to the level of efficiency a company demonstrates when it comes to its working capital.

Note from the following images that GPC has made a considerable improvement over the past several years in how it manages its working capital; working capital efficiency appears to have improved to the extent where further improvement might be difficult. This perhaps explains why the efficiency ratio has hit a plateau at a low level. 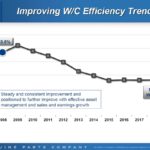 We also see that GPC has shortened its Days Inventory Outstanding and that Days Sales Outstanding has just risen slightly. Its Days Payables Outstanding, however, has skyrocketed from 39 days in 2004 to 104 days in 2018. 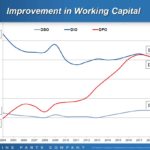 The following image shows how the cash conversion cycle has dropped from 133 days in 2004 to 47 days in 2018. This either means GPC is doing a great job now or was doing a terrible job back in 2004. Perhaps a combination of the two? 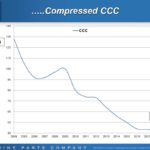 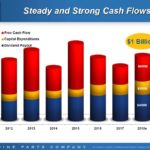 I fully recognize many investors will be attracted to GPC because of its track record of having increased its dividend for 63 consecutive years; on February 19, 2019 it announced a ~6% increase in its dividend ($2.88/share increased to $3.05/share).

A great many investors are probably currently acquiring GPC shares primarily based on GPC being part of the exclusive ‘Dividend King’ group of companies (50+ years of consecutive dividend increases). 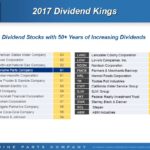 I don’t mind investing in a company with such a track record but at the same time I, like you, want to ensure shares are fairly valued when I acquire them. Having said this, GPC’s share price has been on a tear following the late December broad North American market pullback.

Continue to benefit from creative tuck in acquisitions which have expanded Canadian presence.

GPC has operated for the last several years under the legacy Autototo business model and NAPA Mexico. The long-term strategy has been to move to one banner in Mexico and the Autototo business will no longer be under the GPC banner effective March 1, 2019; Autototo represents ~$0.1B in annual automotive revenues and is not a significant contributor to GPC’s overall profitability.

In November 2018, GPC celebrated the one-year anniversary of the AAG acquisition.

Solid Q4 and FY2018 results were turned in despite unusually mild weather in many regions of Europe during Q4 as well as the continued political unrest in France and ongoing Brexit concerns in the UK.

GPC sees additional opportunities for acquisitions in Europe. In fact, GPC started FY2019 with the closing of the Hennig Group acquisition on January 8. This is one of Germany's leading suppliers of vehicle parts with 31 branches across Germany and estimated annual revenues are $0.19B.

Another strong year and this is expected to continue in 2019.

The economic growth in Australia is fairly robust. The favorable economy and sound aftermarket fundamentals combined with the ongoing execution of GPC’s growth plans bode well for the continued growth of GPC’s Australasian automotive business.

In Q4, 14 of GPC’s major product groups posted sales gains with especially strong results and safety products and industrial supplies, hose, pumps and pneumatics. Sales to 10 of the Top 12 industries served were up with double digit increases reported in the iron and steel, chemicals and allied products, oil and gas extraction and rubber and plastic industries.

Growth initiatives include ongoing strategic acquisitions. The most recent acquisition (Axis New England) was very recently announced and is expected to close in March. This is a leading automation and robotics business which further expands GPC’s capabilities in the area of Industrial plant floor automation.

In addition to future growth prospects in North America, GPC is planning to expand its industrial footprint into Australasia in 2019 with the full purchase of Inenco to be completed in 2019; GPC originally made a 35% investment in Inenco in 2017 and annual sales are ~$0.4B.

This Australian based distribution company has operations in New Zealand as well as the growing presence in Indonesia and Singapore.

S.P. Richards reported the 3rd consecutive quarter of sequential sales improvement in Q4. Sales were up in 3 of 4 product categories for the second straight quarter.

S.P. Richards represents the only independent national business products wholesaler in the U.S. and GPC has indicated it will continue to invest in this business where and when appropriate.

In Q4, all 3 segments earned additional supplier incentives due to improved volumes.

There continues to be emphasis on margin initiatives and GPC expects 2019 gross margin rates to remain relatively in line with FY2018.

GPC has experienced an inflationary pricing environment across each segment with more normal inflation in the industrial and business products and more pronounced inflation in the automotive segment.

The impact of tariffs was not significant in 2018 but, nevertheless, GPC passed on the supplier increases to its customers to maintain its growth margin. This is expected to continue in 2019.

Increased investments in facilities and people in FY2018 as well as rising costs in areas such as payroll, freight, delivery IT, cyber security impacted operations.

In order to improve on operating expenses, GPC is continuing to work toward a lower cost infrastructure. Plans include steps to accelerate the integration of acquisitions, investments to enhance productivity and supply chains, and strategies to unlock greater savings and efficiencies across the global operations.

Management is comfortable with total debt of $3.1B as at FYE2018.

GPC has a cautiously optimistic outlook for 2019 in that there is the potential for an economic slowdown and a slowing industrial economy in the second half of 2019. It also anticipates a more challenging sales environment in Europe in 2019.

Free cash flow in the $0.4B range is targeted.

GPC’s debt is not rated by the ratings agencies.

On the basis of projected diluted EPS of $5.825 the new $3.05 dividend is a ~52.4% dividend payout ratio. I view this level as acceptable and am encouraged to see a slight reduction in this ratio from that reported in each of the past 3 years.

GPC repurchased ~1 million GPC shares in 2018. There is currently 16.4 million shares authorized and available for repurchase.

No set pattern for share repurchases has been set but GPC expects to be active in the program over the long term since management continues to believe GPC’s stock is an attractive investment and when combined with the dividend, provides the best return to shareholders. 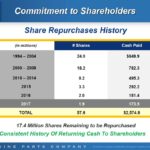 I view GPC shares as somewhat expensive. Given this I have looked into writing covered call contracts on my GPC holding. I prefer to write short-term contracts and since GPC will be issuing its Q1 earnings right around the May 17, 2019 contract expiry date I would prefer to write contracts which expire in April 2019.

I do not want to part with my GPC shares so am looking at out of the money covered calls. I have looked at $155 April 18, 2019 covered calls contracts which would generate $0.85/share. I hold just over 300 shares meaning I would only generate $255 before commission. I do not intend to initiate this trade for so little potential reward.

I am reluctant to acquire additional GPC shares at current levels. I would be open to acquiring additional shares at ~$100 which, on the basis of the FY2019 mid-pint EPS guidance of $5.825, gives us a forward diluted PE of ~17.2.

I view GPC as being well managed and expect it will continue to generate strong and steady cash flow which should enable it to reward shareholders through:

Having said this, I don’t know if GPC will ever crack our top 30 holdings. While it is a great company I look at our other holdings and am far more likely to increase our investment in the likes of Visa (V), Mastercard (MA), the Brookfield companies, etc.. I view those companies as having the ability to generate superior long-term returns.

Disclosure: I am long GPC.