General Mills – I am NOT Biting Despite Attractive Valuation

General Mills (GIS) is scheduled to release Q2 FY2019 results shortly. While the ~5.1% dividend yield and current attractive valuation will appeal to many investors I see far too many headwinds.

Investors should be investing in companies which provide products/services that are growing in demand. Looking at GIS’s suite of products and considering that the number of consumers paying closer attention to what they consume is on the rise I can see why GIS is experiencing growth challenges.

In my May 14, 2018 General Mills (NYSE: GIS) article I indicated that despite the company’s attractive dividend and fierce loyalty on the part of many investors, I just could not justify an investment in the company.

In that previous article I mentioned that while companies in the Consumer Staples sector are typically viewed as a safe haven during periods of market volatility (refer to VIX which is a measure of volatility) or economic downturn, GIS is a company whose brand portfolio leaves much to be desired.

With the trend toward nutritious products, brands such as Häagen-Dazs, Cheerios, Nature Valley, Betty Crocker, and Pillsbury are not the brands that are top of mind when you think of nutritious products. Before you lambaste me for such a comment I suggest you look at all GIS’s brands and then do what I did. Go to the grocery store, pick several of these products from the grocery store shelves, and look at the ingredients of GIS’s products meant for human consumption (I did not look at Blue Buffalo). I suspect you may agree that good health and good nutrition are not the terms that came to mind.

Once I got past the big picture (good health and good nutrition) and drilled down into the numbers, GIS did nothing to convince me that this is a company worthy of owning; this is a list of all the companies in which we own shares.

I fully appreciate that not every company in this list is the best in the vast universe of companies in which you can invest. I also fully recognize that not everyone has the same goals and objectives as me when it comes to investing. I, however, am at the stage of life where dividend and rental income are my family’s sole sources of income. I have absolutely no desire to ever re-enter the workforce nor do I want our standard of living to change. I, therefore, want investments where:

Years ago I came to the conclusion that Buffett and Munger got it right….invest in high quality companies and think about holding your investments in perpetuity (or close to it). This business of buying, selling, buying, selling…holy smokes! Canada Revenue Agency was making money at my expense.

Why do I say all this? Because, GIS does not strike me as a company I can hold in perpetuity.

I know GIS will be releasing its Q2 results on December 19 th but I thought I would have a look at GIS in advance of these results since I do not think one quarter is going to make a huge difference in where this company is headed.

Looking at GIS’s cash conversion cycle over the past decade I can’t see how any of its suppliers are happy campers. While some readers may have the ‘who cares?’ opinion, at some point in time GIS might not be able to stretch its payables much further.

When I look at page 8 of 130 in GIS’s FY2018 Annual Report I see that Walmart Inc. and its affiliates accounted for 21% of GIS’s consolidated net sales and 30% of net sales of GIS’s North America Retail segment. Walmart certainly does not pay its suppliers early nor does it pay a premium for the products that go on the shelves. It looks to me that GIS has relatively limited bargaining power for a sizable portion of its sales.

I have to wonder at what point GIS will deem a Goodwill write-down to be appropriate given that Revenue and Gross Margin are weaker than a few years ago.

This trend ties in with the stretching of GIS’s payables. You can’t have a working capital deficit of this magnitude unless you stretch your payables. I don’t know to what extent GIS can stretch its payables further.

Given that GIS has a substantial amount of long-term debt I thought I would look at the due dates and interest rates. The following is a schedule of GIS’s long-term debt extracted from its FY2018 Annual Report. 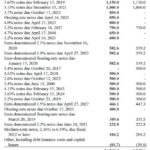 Included in the schedule reflected above is the following $4.8B of fixed-rate notes issued in April 2018. 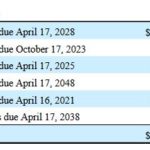 By devoting a section of this article to GIS’s long-term debt I am not suggesting that GIS is at any risk of being unable to service its debt obligations. I do, however, envision that as GIS works to repay these obligations there will be less money available for future share buybacks and dividend increases (once FY2020 is over and done with). In my opinion, investors would be wise not to expect buybacks and dividend increases of the magnitude evidenced in previous years.

I will dispense with a review of GIS’s Q1 2019 results given that we are just days away from the release of Q2 results. I do, however, provide the following links should you wish to review GIS’s Q1 results.

The older I get the more I pay increasingly closer attention to preservation of capital. This is why I look at how the major ratings agencies rate the companies in which I invest / am thinking about initiating a position. I know they sometimes get it wrong but for the most part…they do call things correctly (Full Disclosure: I own shares in Moody’s and S&P Global).

Clearly, the ratings agencies have concerns with GIS. Moody’s once rated GIS’s Senior Unsecured Debt at the A2 level (ratings were withdrawn in July 1990); an A2 rating is the middle tier of the Upper Medium grade.

When Moody’s reinstated GIS ratings in November 2013 an A3 rating was assigned (lowest tier within the Upper Medium Grade category). Moody’s downgraded GIS by 2 notches from A3 to Baa2 on February 23, 2018.

S&P Global rates GIS BBB. This rating is at the mid-point of the Lower Medium grade.

My family owns shares in other companies with these ratings so I am not suggesting you completely avoid an investment in GIS solely on the basis of its current credit ratings. Just be fully aware of the deteriorating trend in GIS’s ratings and be aware that the probability of an upgrade from the ratings agencies in the near future is unlikely.

On November 6, 2018, GIS announced another $0.49/quarter dividend payable February 1, 2019 to shareholders of record as of January 10, 2019. Interestingly, GIS’s Press Release indicates it, and its predecessor company, have paid dividends without interruption for 120 years. It does not, however, indicate that its quarterly dividend has not changed since the August 1, 2017 dividend payment; GIS’s dividend and stock split history can be found here.

In my May 14, 2018 article I mentioned that 'dividend growth has slowed in recent years and in conjunction with the BBPP acquisition, GIS has indicated that it will be maintaining its $0.49/share quarterly dividend until such time as it achieves its net debt to ~3.5x EBITDA by the end of FY2020.’

Fast forward to the present day and with no change in the quarterly dividend and the drop in stock price to $38.48 as at December 7 and shares now yield ~5.1%.

There is no disputing that this is an attractive dividend yield but investors need to realize that with no dividend increase subsequent to the August 1, 2017 payment date and none expected until the end of FY2020, the growth generated from GIS’s dividend has not even kept pace with the rate of inflation.

A ~3% decline in adjusted diluted EPS from $3.11 means GIS should generate ~$3.02 in FY2019. If we were to presume that GIS would generate the $0.71 reported in Q1 in each of the remaining 3 quarters then GIS would only generate ~$2.84 in adjusted EPS for FY2019 which would imply it has a lot of catching up to do in Q2 – Q4. I know this is a very rudimentary method of estimating adjusted earnings for FY2019 but given the current challenging economic environment, I am not optimistic GIS will attain ~$3.02 in adjusted earnings for the year.

I have this nagging suspicion that GIS’s stock price will experience further pullback during this current volatile environment.

If we remain optimistic that GIS will find a way to generate ~$0.68/share in diluted EPS (not adjusted) in each of Q2 – Q4 then GIS would generate $2.69 in EPS ($0.65 in Q1 and $0.68 for each of the remaining 3 quarters). With GIS trading at $38.48 we get a forward diluted PE of ~14.3. This certainly is much lower than the low 20s from recent years and is definitely enticing; I can certainly see why many investors would gladly invest in GIS at this level.

My concern, however, is that when I look at the investment portfolios of 60+ highly sophisticated investors….none of them are buying GIS. In fact, GIS is only held in one portfolio and that portfolio reduced its GIS holdings by 10% in Q1 and another 10.56% in Q3.

If GIS is really that attractive then why are none of these ‘super investors’ snatching up GIS shares?

It is entirely possible that GIS’s share price could certainly rise in value in the short-term but I suspect any increase in value will not be attributed to the underlying fundamentals of the company but rather to fickle Mr. Market.

On the surface, GIS’s valuation and dividend yield are enticing. When I look more closely, however, I just see far too many headwinds to warrant investing in the company. There is a huge universe of companies in which to invest which provide products/services that are growing in demand. Looking at GIS’s suite of products and considering that the number of consumers paying closer attention to what they consume is on the rise I can see why GIS is experiencing growth challenges.

I have my eyes set on high quality companies and am cautiously optimistic stock prices in same will pull back over the next few months. I prefer to keep some powder dry and will pass again on investing in GIS.

Disclosure: I do not own shares in GIS and do not intend to initiate a position within the next 72 hours.

By Charles Fournier|December 9th, 2018|General Investing|Comments Off on General Mills – I am NOT Biting Despite Attractive Valuation