Fastenal Company – Too Expensive at the Moment

In my opinion, the market is experiencing a period of ‘irrational exuberance’. This is making it increasingly difficult to identify shareholder friendly companies which are attractively valued.

In Fastenal Company (NASDAQ: FAST), I have identified what I believe to be an extremely shareholder friendly company. The company went public on August 20, 1987. Had you acquired 1000 shares for $9,000, you would now be holding in excess of 96,000 shares (7 stock splits subsequent to the initial public offering).

As at the time I compose this article the value of those shares would be ~$5 million. In addition, FAST has rewarded shareholders with in excess of $800,000 in dividends over this period of time.

FAST began as a partnership in 1967 with a marketing strategy of supplying threaded fasteners to customers in small, medium-sized, and in subsequent years, large cities. That mandate has expanded to a broader range of industrial and construction supplies broken into twelve product lines: 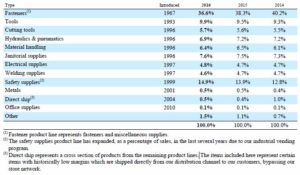 Analysts have estimated the current North American market potential for FAST to be at least $100B with some providing estimates as high as $150B. Given that FAST only had ~$4.4B in sales in FY2017 I am not concerned that FAST will struggle to find growth opportunities in this fragmented industry.

The large majority of FAST’s transactions are business-to-business. At the end of 2017, FAST had 2383 store locations of which 2,083 were in the U.S.. The remainder are located predominantly in Canada followed by Mexico. The countries in which FAST has a limited presence are Panama, Brazil, Colombia, Chile, China, India, Singapore, Malaysia, Thailand, The Netherlands, Hungary, United Kingdom, Germany, Czech Republic, Italy, Romania, Poland, Sweden, South Africa.

The store locations are supported by 14 distribution centers in North America (eleven in the United States, two in Canada, and one in Mexico).

FAST sells predominantly to companies in the manufacturing sector. The following is a breakdown of its ‘end market mix’. 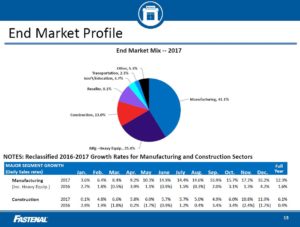 As at FYE2017, National Accounts (FAST’s company-wide key account program) represented ~47% of FAST’s revenue. This figure is closer to 60% if the definition of National Accounts is expanded to include large regional customers and government customers.

Roughly 25% of this business is served by an Onsite team or some other customer-specific location.

This is a ‘store’ either within a customer’s facility or in a lower-cost facility located near the customer.

In addition to these vending devices, there are ~15,000 devices deployed under a locker leasing program. These devices are excluded from most of FAST’s disclosures since they generate rental fees as opposed to product sales.

The 4th growth driver is store locations. FAST has invested heavily in upgrades to its stores through its CSP 16 (Customer Service Project 2016) initiative. This investment has included a significant infusion of inventory in order to improve same-day service capabilities and to allow its local teams to expand the breadth of customers within their sales plans.

FAST’s expansive footprint is an important component of its business model. The expansion in its product portfolio, the vending and inventory management services, and the on-site program are also important growth drivers.

Through these services, FAST can drive incremental revenue while embedding itself in its customers’ procurement processes. This leads to higher retention rates and pricing power.

There is also a trend toward customer consolidation. FAST’s customers are increasingly consolidating their maintenance, repair, and operations (MRO) spending with large distributors to leverage their purchasing power and to increase operational efficiency. FAST’s national scale, broad product portfolio, and inventory management services should enable it to capitalize on this trend and to take market share from smaller and less capable distributors. FAST also benefits from cost advantages resulting from preferential supplier pricing, global product sourcing, an efficient and scalable distribution network, private-label brands, and national accounts.

While the trend is toward e-commerce, FAST’s footprint is a strength and a key differentiator. FAST generates ~85% of its sales from B2B transactions which are managed by the sales team. The stores help support FAST’s on-site program in which there is dedicated inventory and staffing in customer facilities.

FAST offers same-day delivery for locally stocked inventory, and ~80% of sales are fulfilled before 9 a.m. local time the next business day.

Fasteners have a low value/weight ratio, and therefore, shipping can quickly become a very significant cost. FAST has a fleet of large trucks and smaller vehicles to more efficiently and cost-effectively move its inventory across the United States. This insourced shipping capability is a key cost advantage relative to FAST’s competition. The distribution network and centralized order fulfillment centers allow FAST to cost-effectively serve its customers. In addition, the e-commerce sales channel, integrated customer purchasing and inventory management solutions, and warehouse automation which create significant efficiencies is very difficult for smaller competitors to replicate.

Mansco had 2016 sales of ~$50 million and while the transaction was accretive to FAST’s financials within the first 12 months, no material impact to earnings per share was anticipated. In fact, Mansco only increased FAST’s 2017 sales growth by 1.4%.

The Mansco acquisition was the 3rd acquisition by FAST since the fall of 2014; it acquired Av-Tech Industries in October 2014 and Fasteners Inc. about a year later.

While Amazon Business poses a threat, Fastenal offers its client a higher level of service. FAST is certainly at risk of losing business to Amazon but this loss will likely be the highly price sensitive clients which do not require the level of service FAST provides.

FAST released its Q4 and FY2017 results on January 17, 2018 and reported double-digit sales and pre-tax earnings growth for the year.

On the conference call, management indicated that its non-fastener business is growing strongly with gross margin having increased 10 basis points (bps) in Q4 relative to Q3. The fastener business, however, has experienced gross margin slippage from both Q3 and a year ago. The reason for this is:

Rental costs throughout the network are also under close scrutiny. Given that FAST is migrating to the Onsite platform, there should be a reduction in real estate requirements.

Rent dropped $360,000 between Q1 2017 and Q4 2017 and while this is negligible in the context of a company with ~$4.4B in annual revenue, it is an important metric since this is the first time FAST has not seen an increase in its annual rent expense. The current challenge is to exceed this FY2017 rent reduction in FY2018; this rent reduction will be achieved through the growth of the Onsite business and branch consolidation. 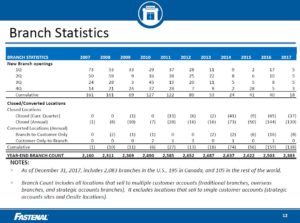 The following reflects FAST’s Operating Cash Flow and CAPEX for 2017. 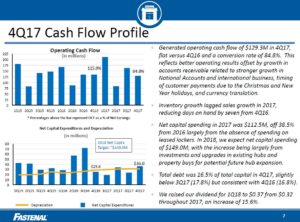 Roughly 88% of FAST’s revenue is generated in the United States. Under the previous tax structure, FAST paid a tremendous penalty for being a US based business conducting business internationally although the tax rate has been dropping over years as FAST’s international business grows. In FY2016, FAST’s tax rate was 36.8% and in FY2017 it dropped to 33.7% due largely to the recently passed tax reform.

On the January 17, 2018 conference call with analysts, management indicated efforts are underway to get a clear understanding of various elements of tax reforms. It does, however, expect the full year rate to settle at a range of 24% - 26%.

Management also indicated it anticipates the recently signed tax bill to have a positive impact on the industrial marketplace in the United States. The industrial marketplace in United States has experienced some of the highest tax levels in the world. As previously noted, before the recent passing of the tax changes, FAST incurred an effective tax rate in the 36.5% - 37%. The S&P 500, however, has an effective rate of about 27% before the tax act.

FAST is of the opinion that most of its customers also face a similar onerous tax rate. It is, therefore, optimistic that the reduction in the tax rate will have a positive impact in that these businesses will have more money available for growth purposes.

Since the mid 1990s, FAST has allocated approximately $4.8B of shareholder capital to dividends (~50%), capital expenditures (~37%), share repurchases (~12%), and acquisitions (~1%). Roughly 90% of the $4.8B has been funded with operating cash flow; debt issuances and other sources of funding make up the remaining ~10%.

Unlike many other companies who have been borrowing significantly to repurchase shares, FAST views share repurchases as a less important component of its capital allocation strategy. Share count at the end of fiscal 2007 was 301 million shares. The diluted weighted average shares outstanding as at December 31, 2017 amounted to 288.3 million.

I have no reason to believe that FAST will deviate from its historical well balanced and shareholder-friendly capital-allocation strategy.

Eighteen analysts have projected FY2018 adjusted EPS of $2.30 and using the January 18th closing stock price, we get a forward PE of ~23.2.

FAST’s stock price has certainly experienced a dramatic increase since July 2017 at which time it was trading in the low $40s. Furthermore, a recent Vickers Insider Trading Chronology reflects several recent ‘Sells’ by insiders but no ‘Buys’. I would think that insiders would have a reasonably good view on whether the company’s stock price is undervalued, fairly valued, or overvalued. If insiders have recently been selling it might not be a great time for ‘non-insiders’ to acquire shares. 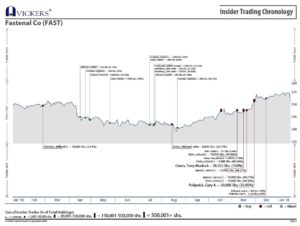 FAST appeals to me as a long-term investment in that:

While FAST is a company in which I wish to initiate a position, I will patiently wait for the share price to retrace to $48 or lower.

Disclosure: I do not currently own shares in FAST and do not intend to purchase shares within the next 72 hours.

By Charles|January 19th, 2018|General Investing|Comments Off on Fastenal Company – Too Expensive at the Moment