Enbridge – Carrying Out Its Strategic Priorities Will Reward Long-Term Shareholders

On November 2, 2018, Enbridge (ENB) released solid Q3 2018 results and provided an update on its strategic initiatives.

ENB is heavily leveraged but once it completes its secured growth project inventory I envision ENB generating significant Free Cash Flow which can be used to reduce debt and support  continued low double digit percentage growth in its annual dividend.

All dollar values expressed in this article are in CDN dollars unless otherwise noted.

I have come across multiple articles in which a writer analyses a company and comes to the conclusion that readers should invest in the company. The writer, however, indicates he/she does not hold a position nor does he/she intend to initiate a position. This puzzles me. I can assure you that if I recommend you invest your hard earned money in a company I either already have a position or I will be initiating a position within the next 72 hours.

I encourage you to read my August 4, 2018 Enbridge Inc. post (TSX: ENB) prior to reading this post. In that post I provide a Business Overview as well as my opinion as to why I viewed ENB’s depressed share price as an opportunity for long-term investors.

My decision to invest in ENB was based on the fact that ENB operates in a highly regulated industry which results in significant barriers to entry. In addition, this is an extremely capital intensive business (another barrier to entry) but once the infrastructure is in place the business is tantamount to a toll road…revenue literally flows in.

I have previously cautioned readers that:

Fortunately, ENB has taken steps to address those concerns.

This image gives you an indication of the extent to which ENB has been actively involved in addressing its strategic priorities. 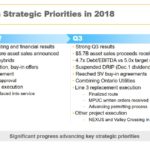 In Q3, ENB reached separate agreements with the Independent Committees of its sponsored vehicles:

to acquire all of the outstanding equity securities of those sponsored vehicles not beneficially owned by ENB; each separate transaction is targeted to close by the end of Q4 2018.

Details on the simplification of ENB’s structure and the asset monetization which occurred at the beginning of August and October can be found in Section 2 of ENB’s ‘Management Discussion and Analysis’.

ENB has incurred considerable expense to obtain all the appropriate approvals for this project. Even though approvals are in place, there is still opposition to the project but ENB is proceeding as planned on the segments where approval is in place and there is no opposition.

In my previous article I indicated that ENB has a renewed focus on low risk pipeline and utility businesses and that it’s strategic priorities include:

In late November of 2017, ENB set out a plan with respect to financing the current $22B secured growth capital program through 2020. That plan included common and hybrid equity issuances as well as $3B of non-core asset sales in 2018 in order to accelerate the planned de-leveraging and to achieve a consolidated Debt to EBITDA ratio of 5.0x by the end of 2018.

ENB has certainly acted swiftly on its strategic priorities having announced over $7.5B of non-core asset sales so far in 2018; this is well in excess of the $3B it had targeted in late November 2017!

By having sold $7.5B in non-core assets, ENB has effectively satisfied all of its equity funding requirements for its secured growth program through 2020. Of this $7.5B, ENB has received ~$5.7B and the balance is expected by mid-2019.

ENB now has additional financial flexibility to further strengthen its balance sheet and fund the secured growth program. As at the end of Q3, ENB’s consolidated Debt to EBITDA ratio was 4.7x on a trailing twelve month basis which is below the 5.0x target by the end of 2018 that ENB had set in November 2017.

Given the substantial progress pertaining to the funding and asset sales plan, I was pleased to read the November 2nd Press Release in which ENB explained the rationale for the suspension of its Dividend Reinvestment and Share Purchase Plan.

Despite the receipt of sale proceeds from the sale of non-core assets, ENB still has a lot of debt on its balance sheet ($58.707B of long-term debt and $0.09B of Other L/T Liabilities as at September 30, 2018). In my opinion, however, I think long-term investors will be aptly rewarded once the major initiatives have been completed. I fully expect ENB to generate strong Free Cash Flow starting in FY2020 which will allow it to make significant inroads to de-risking the Balance Sheet.

On the topic of leverage, the following cautionary note is coming from an investor who avoids the use of debt.

If you happen to be an investor who employs the use of leverage as part of your investment strategy be aware that ENB is highly leveraged. If you decide to borrow to invest in ENB you are, in essence, heaping leverage upon leverage.

There is nothing wrong with that strategy on the condition you fully understand the downside risk which is that debt carries with it a 100% certainty that you will need to repay your obligation yet your investment in ENB carries with it a probability that things won’t pan out as planned.

By Charles|November 3rd, 2018|General Investing|Comments Off on Enbridge – Carrying Out Its Strategic Priorities Will Reward Long-Term Shareholders