I previously reviewed CHD's Q3 2018 results on November 1, 2018 and concluded that investors would be better off being patient and to wait for a more favorable valuation before acquiring shares.

With FY2018 results having come in at what was projected at the end of Q3, guidance calling for a 7% - 9% increase in EPS to $2.43 - $2.47 for FY2019, and the dividend having just been increased 4.6% thereby marking the 23rd consecutive year in which CHD has increased its dividend AND extending the company's track record of having paid a regular consecutive quarterly dividend for 118 years, I take a look at whether CHD is now an attractive investment for the long-term.

I have held a position in Church & Dwight (CHD)  since early 2005 and have benefited from two 2 for 1 stock splits, multiple dividend increases, regular share buybacks, and have witnessed the transformation of a company that generated $1.462B in Net Sales in FY2004 to a company which just reported Net Sales of $4.146B in FY2018.

Despite CHD being one of my top 10 holdings within disclosed and undisclosed accounts, the company’s performance and management impresses me so I am not averse to increasing my exposure (over and above the automatic reinvestment of dividends) if reasonably valued.

From a high level perspective I am somewhat hesitant to acquire shares in our current market conditions and in this recent article I indicated that:

‘I am of the opinion that a pullback in the overall market is likely to occur within the next couple of months. I have, therefore, been combing through my current holdings in an effort to identify companies that appear to be richly valued so I can employ this conservative out-of-the money covered call option strategy.’

Having said this, I am always on the lookout for investment opportunities where I think the investment community has ‘punted’ a company to the curb.

Given that on February 5th CHD released its Q4 and FY2018 results, FY2019 guidance, and announced a 4.56% dividend increase (the regular quarterly dividend has been increased from $0.2175 to $0.2275/share or $0.91/share/year) marking the 23rd consecutive year in which it has increased its dividend, I am taking this opportunity to review CHD.

As an FYI, CHD has paid a regular consecutive quarterly dividend for 118 years!

‘At some point in time CHD’s share price will pull back and I would patiently wait for a better valuation.’

Following the release of the Q3 results, CHD’s share price stock price jumped to $64.87 and ultimately rose to just a shade under $70 by December 13th.

With recently provided FY2019 guidance I now take a look at whether this is an opportune time to acquire additional CHD shares.

It develops, manufactures, and markets a broad range of consumer household and personal care products and specialty products focused on animal productivity, chemicals and cleaners.

The consumer products marketing efforts are focused on 11 “power brands” which generate more than 80% of sales and profits.

These well-recognized brand names include:

CHD has a well-balanced portfolio of household and personal care products with the percentage of sales broken down as follows:

65% of its products are premium products and the remaining 35% are value products.

Much of CHD’s growth has come via acquisition. This image shows the extent to which it has been a serial acquirer since 2004. 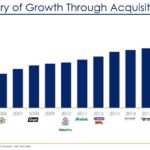 While this presentation is 156 pages in length, I highly recommend that a review of it be included in your analysis process if you are of the opinion that CHD may be a worthwhile potential investment. 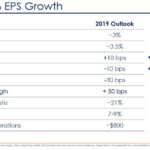 Productivity and pricing are expected to offset continued pressure from commodities, transportation, and U.S. tariffs.

Full year marketing spend is expected to increase as CHD invests in its ARM & HAMMER “More Power to You” power brand campaign.

Further details can be found in CHD’s Press Release for which I provided a link above. 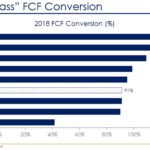 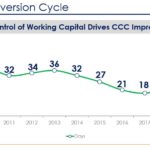 Moody’s continues to rate CHD’s long-term debt Baa1 and Standard & Poor’s rates the debt BBB+. Both ratings are the upper tier of the lower medium grade category; these ratings are investment grade.

Neither agency has CHD's debt under review.

The debt level has grown in recent years due to the company's expansion via acquisition. Total Bank Debt/EBITDA peaked at 2.6X in FY2017 but is expected to be below 2.0X by the end of FY2019. 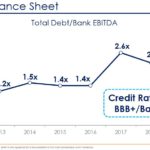 The just announced $0.01/share/quarter 4.6% increase from $0.2175 to $0.2275/share will not excite many investors. Furthermore, with CHD having closed at $60.46 on February 5, 2019, the forward dividend yield is only 1.51%. If you are turned off by this dividend yield I know how you fell as I felt the same way when I initiated a position in early 2005. When I look in the quarterly growth in the dividend income received over the years, however, I am forever thankful I did not cast CHD aside as a potential investment just because of its low dividend yield. 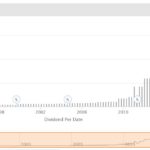 I have benefited from two 2 for 1 stock splits during the time in which I have held shares but I do not envision stock splits any time soon. With CHD, however, you get annual dividend increases like clockwork. Furthermore, the dividends have historically been a return on capital which is unlike some high yielding investments out there where the dividend/distribution regularly consists of a return of capital.

In FY2018, for example, CHD generated EPS of $2.27 and its dividend amounted to $0.87. That ~38.3% dividend payout ratio is just a shade lower than the FY2012 – FY2017 levels; you can feel reasonably confident that CHD can adequately service its dividend and can most likely continue to grow its dividend at its ~9%+ 5-year compound annual growth rate without much risk.

Just another way in which CHD rewards its shareholders!

When I wrote my May 8, 2018 article, management still had the same adjusted EPS outlook and CHD was trading at $47.73. As a result, there was negligible difference in valuation between February and May.

After the Q3 earnings release, CHD’s stock price jumped to $64.87; there was a $5.50/share jump on the date of the release of Q3 results! In my opinion, that jump was overdone.

Now that CHD has released Q4 and FY2018 results and FY2019 guidance and the share price has dropped to $60.46 let’s check out CHD’s valuation.

I recognize CHD operates in a land of giants but when I look at its historical performance and growth prospects I cannot help but be impressed.

I am not, however, prepared to acquire share at any cost regardless of whether the company impresses me or not. This is why I chose to be patient when I wrote my November 1, 2018 article.

Now that CHD has been ‘punted to the curb’ following the release of its Q4 and FY2018 results and FY2019 guidance I am of the opinion that it is reasonably valued (not attractively valued). I have, therefore, acquired additional shares @ $60.4692/share on February 5, 2019; all shares are held in one of our retirement accounts for which I do not disclose details other than to say that CHD is one of my largest holdings.

By Charles|February 5th, 2019|Equity Investing|Comments Off on Church & Dwight – Be Thankful When Good Companies Are Punted To The Curb