CHD is a high quality company which focuses heavily on Free Cash Flow and its Cash Conversion Cycle which is more that can be said for other publicly traded companies such as the company about which I posted an article on October 31st.

While CHD is one of my largest holdings and I think highly of the company, I view the shares as now being overvalued. Disciplined investors would be wise to wait for a pullback in CHD's share price.

Before anyone lambastes me regarding the title of this article I want to be perfectly clear that I view mental health issues like any other major health issue. I most certainly do not look down on anyone suffering from mental illness.

Before you read any further I think it is only fair that I disclose up front that I have been long CHD since 2004 and that it is one of my largest holdings.

I have written various articles on CHD with the most recent being a May 8th article in which I viewed CHD as a better option than Procter & Gamble (NYSE: PG) even though CHD’s ~16B market cap is but a mere rounding error when compared to PG’s ~222B market cap. Don’t just take my word for it….here is a comparison as to how these 2 companies have rewarded shareholders over a 20 year timeframe. 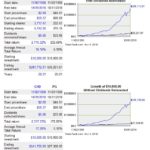 CHD has grown via acquisition over the years and I strongly suspect many investors will be somewhat familiar with the company’s 11 Power Brands from which it derives more than 80% of its sales and profits; 10 of these 11 brands have been acquired subsequent to 2001 (Arm & Hammer baking soda is the exception having been CHD’s core product since 1846). 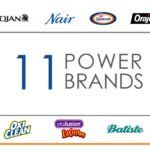 I strongly encourage you to review this presentation where management provides an explanation as to why the company is succeeding despite competing in the ‘Land of Giants’.

The company also generates abysmal Free Cash Flow. In FY2017 it generated sales of ~$9.3B and its FCF was 6 million! That is what you call ‘trading dollars’.

Perhaps the manner in which the CHD employee compensation is structured explains why CHD is able to consistently achieve a relatively attractive Gross Margin. 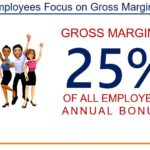 If you look at Section 7 of the September 4th presentation you will see that CHD specifically address its ability to generate strong Free Cash Flow and it addresses its Cash Conversion Cycle. This gives investors some sense as to just how high management views these metrics. 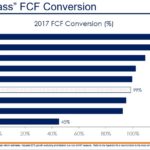 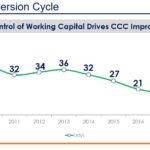 I fully recognize that OMI and CHD are in totally different industries so an ‘apples to apples’ comparison is not possible. Having said this, investors have a huge database of companies from which to select potential investments. What would possess someone to select OMI and not CHD…well, that just baffles me.

On November 1st, CHD released Q3 results and provided guidance for the remainder of the current fiscal year.

CHD has certainly benefited from changes due to tax reform. Its effective rate for the quarter was 21.9% compared to 28.7% in 2017. A full year rate of 22% is now expected.

The Press Release for which I have provided a link (see above) provides a bit more information on what income statement line items went up and which went down.

I have touched upon this topic in the Introduction of this article and have made reference in all previous CHD articles as to its ability to generate strong FCF.

The following image provides a prioritized list of the uses of FCF. 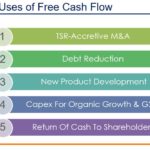 As you can see, debt reduction is priority #2. This is good because CHD has taken on a lot of debt over the years to acquire additional brands.

Note the highly attractive rates at which CHD was able to negotiate on the outstanding Senior Notes. Roughly $0.6B of 2.45% debt comes due in 2019 ($0.3B in January and $0.3B in December). I do not envision CHD will have any problem retiring this debt. 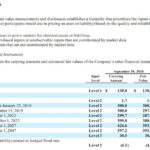 I went into a bit more detail on this subject matter in my May 8th article.

There have been no changes to CHD’s credit ratings subsequent to that article. Moody’s still rates CHD’s long-term debt Baa1 and Standard & Poors rates the debt BBB+. Both ratings are the upper tier of the lower medium grade category; these ratings are investment grade. Neither agency has CHD’s debt under review. 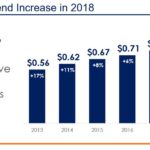 As we saw from my recent OMI article, investors can get burned when they chase high yield stocks. In my opinion, a high yield stock might be a strong indication that all is not well with the company and OMI demonstrated this.

The same investors who chased OMI’s yield will likely overlook CHD as a potential investment because of its chronically low dividend yield (typically sub 1.50%). Investors should note, however, that the Return of Cash to Shareholders is the 5th of 5 priorities when it comes to the use of FCF. Clearly, management is of the opinion that it can add far more shareholder value by deploying funds to grow the business.

With a dividend payout ratio that hovers around the 40% - 43% range, investors can get some degree of comfort that if something goes off the rails at CHD in the short-term there is a remote chance that the dividend will not be negatively impacted.

Where do we stand now? 245.2 million and 250.1 million (a slight uptick from Q1) but nothing to worry about. I envision CHD will continue to reduce share count over the long run.

When I wrote my May 8th article, management still had the same adjusted EPS outlook and CHD was trading at $47.73. As a result, there was negligible difference in valuation between February and May.

After the Q3 earnings release, CHD’s stock price has jumped to $64.87; there was a $5.50/share jump on the date of the release of Q3 results! In my opinion, that jump is overdone which explains the title of this article.

The EPS and adjusted EPS outlook for FY2018 is now $2.27 (a decline of 22% due to 2017 tax law changes and adjusted EPS growth of 17%). This means that CHD’s forward PE and forward adjusted PE is ~28.6. This new valuation is much higher than that I reported in my February and May articles. Heck, it is even higher than the 5 year average PE of ~27!

I think CHD is a great company but at some point I think investors need to step back and wait for Mr. Market to settle down.

There is no disputing that CHD has amply rewarded long-term shareholders and I fully expect CHD will continue to do so over the long-term.

CHD’s stock price has gone parabolic in the last few months and Mr. Market’s reaction to the release of Q3 results on November 1st reaffirms to me that Mr. Market is bipolar. Unfortunately (or fortunately if you’re optimistic like me) this is a good thing.

At some point in time CHD’s share price will pull back and I would patiently wait for a better valuation.

By Charles|November 1st, 2018|General Investing|Comments Off on Church & Dwight – I Think Mr. Market is Bipolar