I view CHD as an attractive long-term investment and have acquired additional shares despite CHD already being a Top 10 holding.

‘Now that CHD has been ‘punted to the curb’ following the release of its Q4 and FY2018 results and FY2019 guidance I am of the opinion that it is reasonably valued (not attractively valued). I have, therefore, acquired additional shares @ $60.4692/share on February 5, 2019; all shares are held in one of our retirement accounts for which I do not disclose details other than to say that CHD is one of my largest holdings.’

Let’s have a look at whether CHD’s valuation and outlook warrants the purchase of shares.

Q3 2019 results can be accessed here. While there is no accompanying Investor Presentation I draw your attention to CHD’s September 3, 2019 presentation from Barclays Global Consumer Staples Conference.

On the gross margin front, Q3 gross margin of 46.6% was a 230 basis points (bps) increase from a year ago. It is also 100 bps better than CHD’s outlook and this is due to the tariff exception benefit. The full year net impact on gross margin related to tariffs in 2019, however, is neutral.

Adjusted EPS of $0.54 is expected in Q4 as a result of planned investments and a higher tax rate.

Organic sales growth of ~4% is projected and reported sales growth of ~5%, previously 6%, is expected partially due to the FLAWLESS integration starting November 1 versus October 1 as well as foreign currency headwinds.

As a result of strong YTD results and tariff relief, CHD intends to make incremental investments in Q4. It anticipates significantly higher marketing spending and investments as it accelerates ~$10 million of spending in R&D, predictive analytics, supply chain, and sustainability.

CHD also intends to accelerate $4 million of investments in its long-term Asia Pacific relationships; this area of CHD’s business was less than $10 million just a few years ago and now it is approaching $50 million. Although this amount is negligible when compare to company-wide YTD revenue of $3.213B, management sees long-term growth potential in the Asia Pacific region. In fact, CHD’s long-term organic growth target for international is 6% although this area of business has averaged 8% organic growth from 2015 - 2018 and 2019 is on track to be another exceptional year. 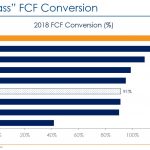 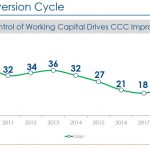 CHD’s grew in recent years due to the company's expansion via acquisition with Total Bank Debt/EBITDA peaking at 2.6X in FY2017. Management’s expectation is that this metric will be below 2.0X by the end of FY2019. 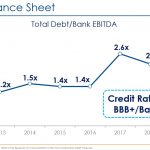 CHD has paid a dividend for 188 consecutive years although the entire dividend history found here does not go back that far in time.

With shares currently trading at ~$68.25, the $0.2275/share quarterly dividend ($0.91/share annually) provides a yield of ~1.33%. This dividend, however, is covered by profits generated from normal business operations.

As an aside, some investors have adopted a strategy in which attractive dividend yielding stocks are their sole/primary stocks of interest. In many cases, I highly suspect many of these investors do not fully comprehend the risks associated with this strategy. In my opinion, investors would be wise to question the sustainability of a lofty dividend yield in this current low interest rate environment.

We see a slight uptick as at September 30, 2019 to 246.4 million and 252.5 million. If history is any indication, I expect the average shares outstanding (Basic and Diluted) at the end of the current fiscal year to be lower than FYE2018.

When I wrote my May 8, 2018 article, management still had the same adjusted EPS outlook and CHD was trading at $47.73. As a result, there was negligible difference in valuation between February and May.

After the Q3 earnings release, CHD’s stock price jumped to $64.87; there was a $5.50/share jump on the date of the release of Q3 results! In my opinion, that jump was overdone.

I have been a CHD shareholder since early 2005 and have benefited from management’s ability to create long-term shareholder wealth. The significant appreciation in CHD’s share price over the years has resulted in CHD now being one of my Top 10 largest holdings.

Despite the recent drop in CHD’s share price, CHD is still not on ‘sale’. In addition, the low dividend yield will prompt many investors to overlook CHD as a potential investment. I, however, am approaching my CHD investment from a long-term perspective and I acquired additional shares on November 1st for an account in which I do not disclose details.