It is currently expanding its broadband Fibe network, including its Gigabit Fibe Internet footprint in Ontario, Québec, and Atlantic Canada. On March 17, 2017, BCE completed its acquisition of all of the issued and outstanding common shares of MTS. With this recent acquisition, BCE has indicated it plans to make capital investments of $1 billion over the next 5 years.

Bell Media is Canada's premier multimedia company with leading assets in television, radio, out of home and digital media, including CTV, Canada's #1 television network, and the country's most-watched specialty channels.

BCE also operates the most extensive network of retail outlets; this includes its 650 “The Source” locations; “The Source” is one of Canada’s leading consumer electronics and cell phone retailers. Its history in Canada goes back over 40 years. Initially it was Radio Shack and subsequently became “The Source by Circuit City”. In 2009, BCE purchased the assets of InterTAN from its parent, American retailer Circuit City.

BCE’s current market cap is in excess of $39.77B. It closest rivals are:

No other Canadian competitor has a market cap in excess of $3B. 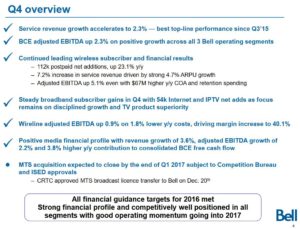 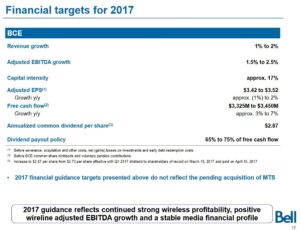 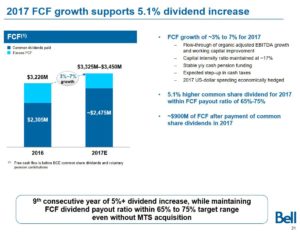 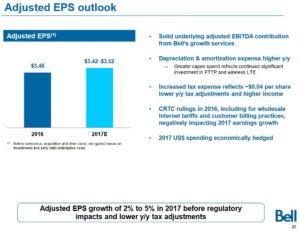 BCE is currently trading at a PE just shy of 17.70. This is slightly elevated relative to historical levels but it has pulled back from a level that was in excess of 18.4. 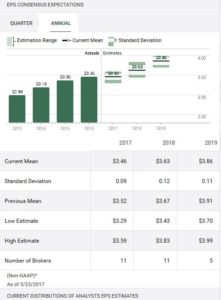 BCE’s dividend yield using the recently announced annual dividend of CDN $0.7175/quarter or CDN $2.87/year is just over 4.8%. This is attractive in today’s environment. It is particularly attractive for Canadian shareholders since BCE’s dividends will not attract the 15% withholding tax which is levied against dividends earned from US listed companies if shares are held outside a Registered Retirement Savings Plan (RRSP) or Registered Retirement Income Fund (RRIF).

BCE is currently held in the FFJ Portfolio and has been a core holding in other investment accounts for a few decades. It is actually the first company in which I have owned shares as my parents acquired shares in trust for me in the early 1960s.

There are not many companies listed on the Canadian stock exchanges that appeal to a conservative investor such as me. BCE, however, is one of the few publicly traded companies in Canada where I feel reasonable confident that I can put my head on the pillow and I won’t wake up the following morning to some unpleasant news.

In my opinion, BCE is one of those companies where you acquire shares, tuck them away, and just collect/automatically reinvest the dividends.

While I recommend BCE as a long-term hold, I will not be acquiring additional shares as we currently hold a full position. Should BCE get caught up in some catastrophic market correction, however, I would very seriously entertain the acquisition of additional BCE shares.

Disclosure: I am long BCE.