In 2011, I acquired several hundred The Bank of New York Mellon Corporation (NYSE: BK) shares at an average cost of $20.4554; these shares are held in my wife’s Registered Retirement Savings Plan (RRSP) as opposed to the FFJ Portfolio. By holding US listed shares in an RRSP we avoid the 15% withholding tax Canadians incur on US dividend income. In addition, all quarterly dividends are automatically reinvested.

While I would like to say that I was an extremely astute investor when I acquired these shares, nothing could be further from the truth. When I decided to invest in BK, this is what I saw:

Perhaps the best thing I noticed was that BK’s stock was getting hammered. Times really were not good for BK and shortly after I acquired shares, Robert Kelly (then CEO of BK) was axed.

BK is a global investments company which services and manages much of the world’s financial assets. It has a comprehensive array of investment management strategies for virtually every risk profile, strategy and asset class. In addition, it has a broad set of capabilities and advanced technology platforms which enable speed to market and also drive innovative, cost-effective solutions and growth opportunities. These have all enabled BK to become the seventh largest investment manager in the world.

BK operates businesses through two segments: Investment Management and Investment Services. And also has an “Other” segment, which includes credit-related services; the leasing portfolio; corporate treasury activities, including its investment securities portfolio, its equity interest in ConvergEx Group, business exits, and corporate overhead.

BK 2016 results can be found in this Press Release and in the following recap extracted from BK’s January 19, 2017 Earnings release. 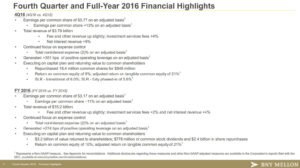 BK improved upon 2015 results in the key metrics reflected in the following diagrams and is trending well relative to the Goals set out in 2014 with the exception of Adjusted Revenue growth where it is falling short. NOTE: these 3 year goals were based on a flat rate environment and in a normalized rate environment. 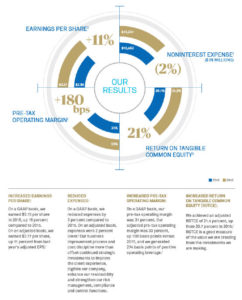 BK is currently in the process of establishing new goals which will be communicated to shareholders later this year. 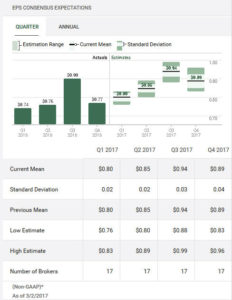 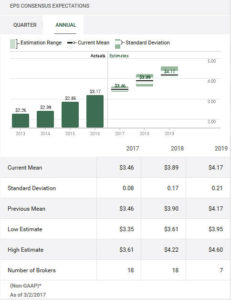 This seems a bit rich for my liking considering BK:

As an investor I look for two things from an equity investment. I look for growth in the underlying value of the shares owned and a consistent increase in dividends.

BK’s shares have certainly increased in value relative to our average cost of $20.4554. BK has not, however, satisfied my requirement on the dividend front. I have relaxed this requirement given that it has repurchased a significant number of shares subsequent to our 2011 acquisition date and BK’s performance has evidenced improvement is the past few years.

In FY2016, BK returned $3.2B to shareholders. $2.4B consisted of share repurchases and $0.778B represented common stock dividends. While there is certainly room to increase the dividend payout ratio beyond FY2016’s sub 25% level, I suspect the focus will be on reducing the number of shares outstanding to at least the FYE2007 level before any significant dividend increase is entertained.

Given the above, I would be reluctant to acquire any additional BK shares unless the PE ratio was to drop to 12. Using the $3.46 Mean 2017 EPS estimate previously noted and this PE ratio, I would not be prepared to pay more than ~$41.52/share. This means BK’s stock price would need to drop just over 13% from the current level before I would even consider acquiring more shares.

I recognize some readers may be of the opinion that I might be waiting a long time before BK’s stock price reaches this level. If such is the case, then so be it. BK’s historical performance is such that I am not prepared to chase BK.

If you currently own BK shares like me, you may wish to consider generating additional income through the use of a relatively plain vanilla option strategy. You could write a covered call with an out-of-the-money strike price. 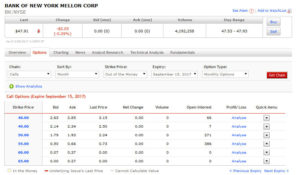 You would keep your shares and the option premium if BK stays below $50 between now and September 15, 2017.

Should BK rise above this level, you could get called away. This means you would receive $50/share and you would retain your option premium. You would, however, no longer own the shares.

If you thought you were going to get called away because BK’s stock price exceeded $50 and you really did not want to part with your BK shares, you could close your option contracts at whatever the going rate is at the time; you could end up paying more than you received when you first wrote the contract. You could then write new contracts further out into the future at a higher strike price. The premiums you receive for these new contracts could cover whatever money you laid out to close out your first set of contracts.

NOTE: As the owner of BK shares, you receive the dividends during the period in which your option contracts are open.

My rationale for acquiring BK shares in 2011 was because I had no intention of investing in a company which:

While we have certainly had a positive experience with BK given that it has appreciated 140% in value from our average cost, BK has not met my steady dividend growth requirement. I relaxed this condition because I felt BK was “on the ropes” during the Financial Crisis but it would be a “survivor” thus allowing us to benefit from the growth in price.

If you are not in our position of having invested in BK at depressed prices, however, be forewarned.

Go to the company’s website and plug in various dates into their “Total Return Calculator”. Buy at the wrong time and it could be years before you generate a reasonable return on your investment!

As previously noted, don’t expect BK’s dividend policy to ease your pain and sorrow if you overpay when acquiring your shares.

Clearly, an investment of any sort depends upon your unique circumstances. If you feel BK might fit your investor profile and would be a suitable holding within your overall portfolio, I suggest you sit tight and wait for its stock price to retrace to more favorable valuation levels.

Disclosure: I am long BK.