The Financial Concerns, Priorities, and Behaviors of Mass Affluent Americans

I just finished reviewing the Fall 2016 edition of the Merrill Edge Report; Merrill Edge is part of Bank of America Corporation. This nationwide survey is released twice a year and provides an in-depth look at the financial concerns, priorities, and behaviors of mass affluent Americans. I have no empirical evidence but I would imagine for readers in Canada the financial concerns, priorities, and behaviors would be relatively similar.

Earlier in 2016, findings revealed that millennials are redefining the path to retirement. In the Fall 2016 report, Merrill Edge dug deeper into the growing trend to learn how Americans are approaching retirement the impact it may be having on their financial planning.

The findings reveal that retirement as we know it may become extinct. Younger generations indicate they plan to work well into retirement. While most of today’s retirees (83%) are not currently working or never have during their golden years, the majority (83%) of millennials plan to work in retirement whether for income, to keep busy, or to pursue a passion.

Exactly half of younger millennials, ages 18-24, believe they need to take on a side job to reach their retirement goals, compared to only (25%) of all respondents. 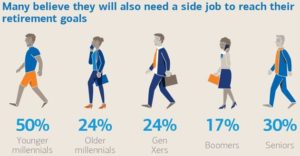 The rise of an environment where temporary positions and short-term projects are more prevalent and longer-term careers may be why millennials (15%) are three times more likely than Gen Xers and baby boomers (5%) to rank an employer’s retirement plan as the most important factor when taking a new job.

Feelings of insecurity and uncertainty compound the younger generation’s mindset, as the majority of Americans are unable to articulate or underestimate how much they need to save for their retirement years. Many of Merrill Edge’s survey participants find themselves part of the “Sandwich Generation,” where they must balance short-term needs (ie. caring for aging parents and children) with the long-term need of saving for their own retirement or children’s education.

The survey found that many Americans feel uncertain or underestimate the amount of money they think they need to live their desired retirement.

When asked why they save for retirement, the respondents indicated:

It was also found that Americans are comfortable disclosing their “magic number” withtheir closest relationships. The only person the majority (54%) of respondents feel comfortable discussing their current retirement savings with is their spouse or partner followed by:

Even with growing insecurities, however, many still believe they are better at saving than: 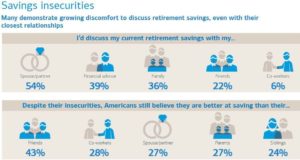 I find these results disconcerting. Clearly a large percentage of the population has:

Fortunately, there are some positive findings from this survey.

This growing sense of self-reliance among millennials seems to be increasing the desire for further financial guidance and validation from professionals. Millennials are most likely to plan to hire a financial advisor within the next five years (31%), compared to any other generation, and are the most open to receiving financial advice online (42%).

How do you stack up against these statistics?

By Charles Fournier|December 12th, 2016|General Investing|Comments Off on The Financial Concerns, Priorities, and Behaviors of Mass Affluent Americans