Paychex Stock Analysis: Love the company, not the price.

PAYX is less than half the size of ADP from a market capitalization perspective (22.34B vs 46.8B) as I compose this post on December 21, 2016. Despite being much smaller than ADP, PAYX is still formidable and has grown to more than 12,000 employees serving in excess of 1 million small to medium-sized businesses nationwide as per a December 1, 2016 News Release. Another impressive statistic is that it pays one out of every 12 American private sector employees.

PAYX’s operates from more than 100 locations in 40 states. This is a major difference between PAYX and ADP in that PAYX’s business is almost exclusively in the United States whereas ADP has operations in multiple countries.

While PAYX has operations in Germany (4 locations) and long-lived assets in Germany, the level of business it conducts in Germany is immaterial. It also has a joint-venture arrangement to provide payroll and human resource services in Brazil but, once again, revenue from these operations is not material.

Services offered by PAYX consist of:

On December 22, 2015, PAYX completed its acquisition of Advance Partners, a leading provider of integrated financial, operational, and strategic services to support independent staffing firms. It offers customizable solutions to the temporary staffing industry, including payroll funding and outsourcing services.

PS revenue was $440.9 million, a 3% increase from the same period FY 2016. Advance Partners contributed approximately 1% to this growth.

HRS revenue was $319.1 million, an increase of 12% compared to the same period in the previous fiscal year. HRS revenue growth was primarily driven by increases in client base across all major Human Capital Management (HCM) services including comprehensive human resource outsourcing services, retirement services, time and attendance, and human resource administration. Advance Partners contributed approximately 2% to the growth of HRS revenue in Q2. 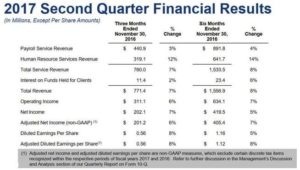 PAYX benefited from slightly higher interest rates which resulted in interest earned on funds held for clients increasing 2% to $11.4 million in Q2 relative to Q2 FY 2016. This came about even though average investment balances held for clients were down 1% for the second quarter. Although there was client base growth, the lower average balances were more than offset by the impact of the timing of certain remittances to taxing authorities.

Cash and short-term investments as at November 30, 2016 totaled $725.1 million with normal business operations being the primary source of cash.

Outlook for Remainder of Fiscal 2017

PAYX provided the following outlook for the fiscal year ending May 31, 2017. This is based upon current market, economic, and interest rate conditions continuing with no significant changes. In addition to what is not reflected below, the effective income tax rate for fiscal 2017 is expected to be approximately 35% which is slightly higher than that incurred YTD and the previous FY.

Dividends have historically been paid to common stock shareholders in August, November, February, and May. On October 12, 2016, the Board of Directors declared a regular quarterly dividend of $0.46 per share which was paid November 22, 2016 to shareholders of record November 1, 2016.

Note: PAYX’s Board of Directors decided to accelerate the distribution of its February and May 2013 dividend and same were distributed in December 2012. The above noted dividends were obtained directly from the 10-K reports.

PAYX’s historical dividend for 2008 – current is as follows:

What is to dislike about PAYX?

If I wanted to augment my return on the PAYX shares we own, I might write an out of the money $65 June 2017 call which is being bid at $0.80. The likelihood of me doing this, however, is remote. I am just happy to sit on our PAYX shares with no worry about our shares being called away if I am off doing something far more enjoyable than monitoring stock prices. 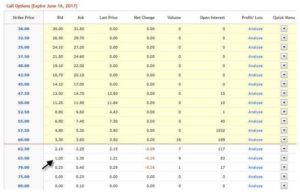 PAYX is a wonderful business and I highly recommend it as an investment....just not at the current valuation. I am very reluctant to invest any more money in PAYX at current levels and a forward P/E of 27.65 (current price $61.39/$2.22 EPS estimate from 22 brokers).

I recognize the new US President has promised job creation which would be a huge positive for PAYX. In addition, if interest rates trend up, PAYX will generate additional income on client funds held on deposit.

I, however, sense an element of euphoria somewhat similar to the high-tech bubble in 1999 – 2000 (although not to quite the same degree). I have witnessed the repercussions when people are willing to pay 30xs earnings (and more). Some readers may say this time it is different. If this time is different, so be it. If it is not different, then at least I have not stepped on a landmine.

An argument could be made that I should perhaps sell our PAYX shares if I feel they are overvalued. Very valid point considering they are held in a Registered Educational Savings Plan (RESP) so the sale of same would attract no capital gains tax; the dividends do attract a 15% withholding tax. I, however, have no interest in parting ways with this company much like Warren Buffett and Charlie Munger had no intention of parting ways with Coca Cola when it was grossly overvalued in 1998. I don’t even intend to sell these shares to fund our daughter’s education although I will inevitably have to sell our PAYX holdings as there is a deadline by which I must liquidate the RESP. When this happens, I will just turn around and repurchase the same number of shares in a non-registered account.

I will patiently wait to add additional PAYX shares to those currently held and acquired at an average cost of $23.2771. Should PAYX experience a correction which brings its shares to a more reasonable P/E multiple of 25 (or lower), I would consider buying. Using the consensus projected EPS of $2.22 provided by 22 brokers, I would be prepared to add additional PAYX shares if the price drops to about the $55 level (25 * $2.22).

Disclosure: I am long PAYX.

By Charles Fournier|December 23rd, 2016|Equity Investing|Comments Off on Paychex Stock Analysis: Love the company, not the price.