Skip to content
Home » Parker-Hannifin – Temper Your Expectations
Previous Next

Investors seeking a steadily increasing source of income often blindly turn to lists of companies that have a lengthy dividend track record. One such list is that of Dividend Kings; these are companies which have increased their dividend at least 50 consecutive years.

One member of this exclusive group of companies is Parker-Hannifin (NYSE: PH). PH may not be a name with which some investors are familiar but when it comes to a dividend track record of annual dividend increases, PH has paid quarterly dividends to shareholders for the past 68 consecutive years and has raised its dividend for 61 consecutive years.

PH is a leading worldwide diversified manufacturer of motion and control technologies and systems, providing precision engineered solutions for a wide variety of mobile, industrial and aerospace markets.

Operations are located in 41 states within the United States and in 49 other countries. Products are supplied to approximately 439,000 customers in virtually every significant manufacturing, transportation and processing industry. No single customer accounted for more than 3% of PH’s total net sales for the year ended June 30, 2017.

More comprehensive detail on PH’s business including the major markets for these two segments can be found starting on page 4 of 88 in PH’s 2017 10-K.

The Diversified Industrial segment is highly competitive. Given that PH’s products are sold over numerous, varied markets through various divisions which operate in multiple US states and other countries, PH has hundreds of competitors.

The size of these competitors and the degree of competition varies widely by product lines, end markets, geographic scope and/or geographic locations.

In the Aerospace Systems segment, PH has developed alliances with key customers based on its advanced technological and engineering capabilities, superior performance in quality, delivery, and service, and price competitiveness. This has enabled PH to obtain significant original equipment business on new aircraft programs for its systems and components and thus to obtain the follow-on repair and replacement business for these programs.

PH’s annual revenue in FY2017 amounted to $12B and as recently as March 2018, PH has provided guidance of $14.2B in FY2018 annual revenue and $16.5B for FY2023. This 3.2% compound annual growth rate certainly appears to be an ambitious target and I suspect PH will be challenged if we enter a long overdue economic downturn between now and FY2023.

Fortunately, PH is confident that the CLARCOR acquisition will add resilient recurring revenue streams, as nearly 80% of its revenue is generated through aftermarket sales. 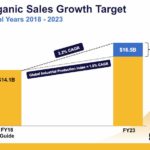 This revised FY2018 earnings guidance reflected a reduction in PH’s U.S. Federal income tax rate, which resulted in a lowering of PH’s average effective tax rate in FY2018.  On an adjusted basis, forecasted earnings reflected the net one-time adjustment in income tax expense of $224.5 million, or $1.65/share recorded in Q2 2018, as well as expected business realignment expenses of approximately $58 million and ~$52 million in CLARCOR costs savings PH expects to achieve.

Q3 2018 results are expected to be announced April 26. I intend to quickly review PH’s results at such time to ascertain whether PH projects a further amendment to its projected FY2018 results.

I recognize many investors are attracted to PH as a result of its stellar dividend track record. I strongly suspect, however, that some of these investors have paid little attention to some of the other metrics which are far less favorable.

The following are some key metrics extracted directly from PH’s FY2008 and FY2017 10-Ks. 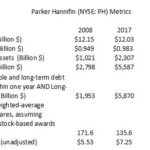 PH’s Net Sales in FY2017 amounted to $12.03B. In essence, PH’s top line results are worse than reported if we take into consideration the impact of inflation over the past 10 fiscal years.

During the period under review, PH’s diluted weighted-average common shares outstanding (assuming exercise of stock-based awards) and EPS has certainly decreased and increased, respectively. The magnitude of the growth in PH’s ‘notes payable and long-term debt payable within one year’ AND ‘long-term debt’, however, is significant! While PH has used long-term debt to finance various acquisitions, it has also used debt to reduce its outstanding shares thus bolstering EPS.

I have no objection to companies using low cost debt to reduce the number of outstanding shares but this strategy cannot go on in perpetuity. At some stage, PH will need to scale back on its share repurchases through the use of debt and will need to start repaying this debt. Once this happens, I envision dividend growth will slow to single digit annual percentage growth as evidenced in the last couple of years.

Another observation has to do with PH’s non-contributory defined benefit pension plan obligations. A random sampling of 10-Ks over the past 10 years reveals the following:

These obligations are relatively insignificant in the grand scheme of things when viewed in isolation. Aggregate these amounts over several years, however, and you realize that PH’s defined benefit pension plans require huge capital outlays! Defined benefit pension plans suffer significant shortfalls in low interest rate environments. Cash contribution requirements typically decline in a rising interest rate environment and sometimes, depending on various factors, surpluses are evidenced (interest rates typically need to be much higher than current levels). 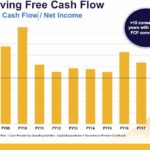 S&P Global has assigned a rating of A which is the middle tier of the upper medium grade. This rating, however, has been on credit watch since December 2016.

PH has indicated its goal is to maintain no less than an ‘A’ rating on senior debt to ensure availability and reasonable cost of external funds. In periods following significant capital deployment, including for share repurchases or acquisitions, certain of the ratings assigned to senior debt may be lower than the stated goal.

While PH’s current ratings are satisfactory from my perspective, I do not like the trend.

PH has previously traded at a Price/Cash Flow multiple slightly higher than the S&P500 average. In the last fiscal year, however, the variance between PH’s multiple and the S&P500 multiple has grown to 4.6 versus 2.7 in 2016 and 1.7 in 2015.

In my opinion, many investors may be focusing primarily on EPS growth and the reduction in the number of shares outstanding and are overlooking some of the weaknesses reflected in this article. As a result, PH’s share price has been bid up to the extent where its trailing 12 month PE ratio is in excess of 27. In my opinion, PH’s share price has become detached from reality. 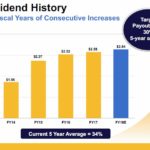 PH certainly has an enviable dividend compound annual growth rate over the past several years as borne out in the following chart. 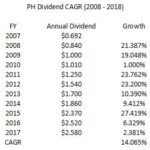 Regrettably, PH’s website does not accurately reflect all of PH’s 3 for 2 stock splits; PH has done this split on 4 separate occasions with the most recent being in 2007 although this is not borne out on the company’s website.

Based on PH’s April 17, 2018 $175.85 closing stock price the current $0.66/quarterly dividend results in a ~1.5% dividend yield. PH has kept this quarterly dividend constant for 5 consecutive quarters and I suspect a dividend increase is forthcoming. In my opinion, a low single percentage increase in PH’s dividend is all investors should expect. I do not see PH as being in a position to increase its dividend beyond this level.

PH prides itself on its dividend track record and views maintaining its status as a Dividend King as of significant importance. While PH certainly generates significant Free Cash Flow per share (~$7.90 in FY2017), management specifically indicated during its March 7, 2018 Investor Meeting that dividends would be ~30% of Net Income. 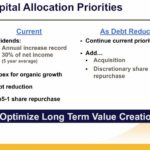 If the forecast is for $7.38 - $7.78/share in FY2018 diluted EPS and the dividend payout ratio is to be closer to 30% then the dividend per share should be $2.21 - $2.33. In FY2017, PH paid a $2.58 dividend on $7.25 of diluted EPS; this is a 37.2% dividend payout ratio. PH is certainly not about to reduce its dividend, and therefore, investor should temper their expectations with respect to PH’s next dividend increase (low single percentage increase as previously noted).

PH has indicated discretionary share repurchases is one key capital allocation priority as debt reduces. Once again, I think investors should temper their expectations with respect to share repurchases over the next fiscal year. Keeping in mind the comments reflected in the Credit Ratings section of this article, I suspect that in the short-term PH may place a higher priority on debt reduction in an effort to improve its credit rating versus share repurchases.

Many may argue that PH is a great investment given its exclusive status as a Dividend King. I, however, am not as upbeat on PH even though its CLARCOR acquisition in 2017 should generate reasonable positive results once fully integrated and should reduce the cyclical nature of PH’s business.

Shareholders have certainly been rewarded over the years but if you look closely at the numbers, PH has not grown its top and bottom line in a decade despite other acquisitions! The 2017 CLARCOR acquisition is expected to bolster PH’s top and bottom lines but if we enter an economic downturn within the next couple of years it remains to be seen to what extent CLARCOR’s business reduces the volatile nature of PH’s business.

Fortunately, PH has generated strong cash flow over the years. Using some of this cash flow and additional debt, PH has significantly reduced its share count which has had a positive impact on earnings per share.

The challenge I see is that PH has already experienced downward ratings adjustments from a couple of ratings agencies and one has PH on watch. I don’t think management wants another ratings cut, and therefore, debt repayment will be most likely be given priority over share repurchases of the magnitude evidenced in recent years; depending on what/how/when this debt is repaid it is possible this debt repayment will not have as great an impact on EPS as the historical repurchase of shares outstanding.

I am also of the opinion that investors should not expect dividend increases similar to those in 6 of the previous 10 fiscal years as PH’s dividend payout ratio is already in excess of PH’s 30% of net income target.

PH is also trading at a lofty valuation. The S&P500’s average PE is just shy of 21, PH’s 5 year average PE is ~18.5, and PH now has a trailing 12 month PE of ~27.4. If there is a reversion to the mean, PH investors will likely end up getting a double whammy…slower dividend growth and a pullback in share price.

In my opinion, I think PH faces too many challenges in order for it to warrant a place in my equity portfolio. I will move on to seek other opportunities.

Disclosure: I do not currently hold a position in PH and do not intend to initiate a position within the next 72 hours.

By Charles|April 17th, 2018|Equity Investing|Comments Off on Parker-Hannifin – Temper Your Expectations